We are still having  nice fall weather; no killing frost yet.  Most days are sunny but yesterday was a dreary cool, misty day.

I didn't realize about the mist until I went out to harvest more peppers that I had spied during my mowing escapade.  I picked a Walmart sack to bulging full.

Speaking of 'cooking groove', I have had this happen several times in my later years.  When I related it to my older Sis she said she had had the same thing.  What happens is I cook my normal recipes and somehow they don't turn out well.  The first was biscuits that I have made l,000's of times.  I know the recipe by heart.  I knew the dough was too soft but  I kept kneading in more  flour......to no avail.  They tasted fine but  were flatter than they should be and looked really strange.  My last batch of bread made a few days ago weren't top notch.  Yet, I had measured carefully and kneaded as always....bread was not lovely inside.....tasted fine but not primo.  I had better sense than to attempt a cake or pie crust!

This morning, I made biscuits again just to see if the black cloud had passed.  Thankfully, it had and the biscuits were up to my usual standards. 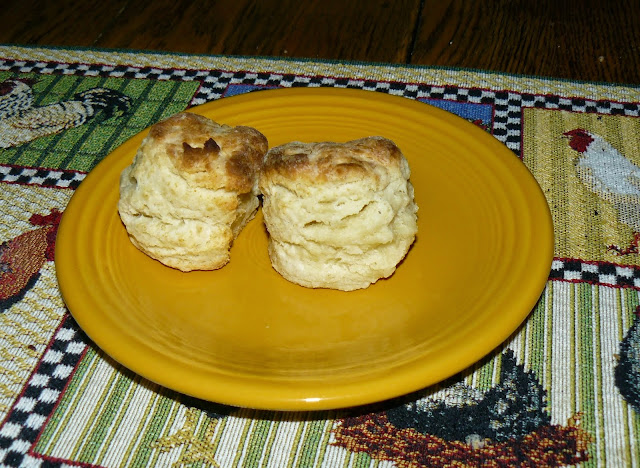 It is such a simple recipe:

Cut shortening into flour mix until size of small peas.  Add milk.  Stir until just moistened.  Knead about four times.  Cut into size you like.  Bake at 425 to 450 degrees for about l0  minutes or until brown and done inside.

I talked to my Sis yesterday evening and she had the same cloud in Iowa.  She was making a  chicken casserole and wan ted to double the recipe of 2 cups of chicken broth so she added 4 'cans' instead of 4 cups.......then had to try and drain (after mixing the ingredients) the excess; add more bread, etc.  It was tasty but not as it should have been.  I told I jinxed her by telling  about my issues....Sisters are wonderful.  We often even cook the same  foods on the same day.

Update on the Mower:  We now have a new $55 tire.  The hole was beyond repair.  All that is left is to air up the front tire.  DH even got the tire back on and drove the mower up to the shop......he did warn me  about not driving it until he checked everything out.   My mowing days could be coming to a close (not really).  I do need to finish the area behind the garage before winter sets in.

Along the same Sister lines....two months ago she drove their mower into the mini horse panels (cattle panels) and BIL had to remove the panel to unhook it from the mower.  You could call us the Lucy twins.

I also made my Sis's recipe  for bread pudding only to find DH wasn't too impressed.  The only difference  is it called for  stale white bread instead of Mom's recipe using stale biscuits.  I think I like the biscuit better too.
Posted by gld at 6:02 AM