Well, I got very little done over  the weekend.  I decided to try to organize the upright freezer...........egads.  That led  to taking about 6 Walmart bags of stuff out to the chest freezer.....then, of course, I had to reorganze that one so I would know what we had and where it was located.  I actually made an inventory list and diagram of location.  That will last about a month...........
After standing on concrete for a couple of hours I was done for the day.

Our resulting  lunch was interesting to say the least. I thawed two mystery packages.  One was a favorite spaghetti/cheese bake and the other was some sauteed garden veggies (tomatoes, onion, peppers, squash, and corn).  That last was a nice surprise.  It was as good as fresh.  My Iowa Sis had told me she does that with excess squash because they don't freeze well alone.  I will do it again.  DH even ate his share.

I also thawed three containers of  chicken broth so will  make  a large pot of some soups today.
Pulled a rack  of baby back  ribs out of the chest freezer and will barbecue them in the oven today too.

I made the soup, minestrone, the ribs, and still have enough broth to do another soup....maybe chicken and rice.

I decided to do some mowing yesterday afternoon and was delighted that it was not painful.  I  mowed the chicken yard  and around the west end of the garden when disaster struck!  The mower bogged down; I thought it was buried in mulch and tried over and over by turning and backing and pulling forward before I gave up and checked to see what was happening.  The rear large tire  was off the rim and the front one was flat.  I don't know what happened....I did see a broken bottle I got too close  to near the lagoon and I brushed way too close to a steel fence post....My mate was not happy.....This morning we  will take the wheel off and hope that it can be fixed.  The front will just (I hope) need air.

Along the lines of 'when it rains; it pours', I decided to put the 25 gallon sprayer on the the back of the old ATV so I could spray a fence row.  I was told it wouldn't start.  I am hoping a few hours on the charger will take care of that problem.  I need the pressure  of the big sprayer to do a good job on those Elm sprouts.

The next pictures are the results of the neighbor's scroungy  bull getting over on us many times.  They will be sold quickly.  I sure don't want those horns passed along. 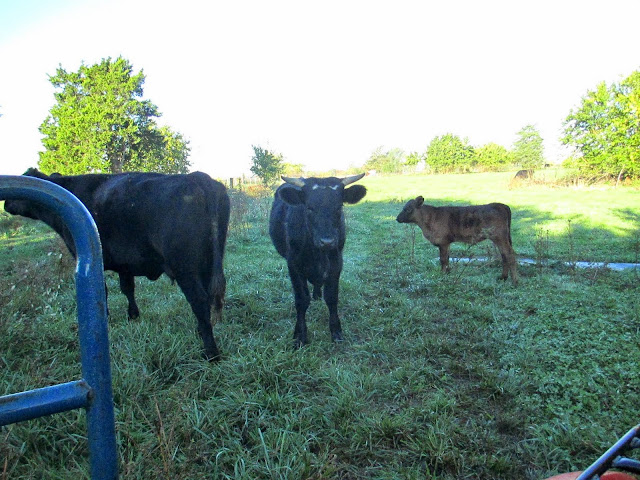 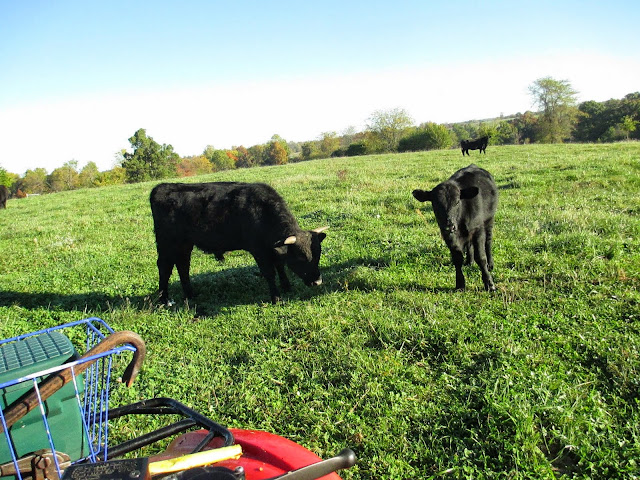