A mish mash of Events

I haven't squeezed in time to actually blog but now and then I typed a Journal thing of events....I will try to rebuild and use that to catch up.

Journal
"
We have had about a month of "if it can happen, it does".

First a severe windstorm with 2 inches of rain in an  hour.

The 70mph winds brought down tree limbs and twisted the center out of my Red Maple tree that is several years old and took out half of my new red Locust tree that was so lush and beautiful.  During the storm, the power went off and the generator did not come on!  The neighbor got it going again and then..........the air conditioner stopped.  It literally exploded and blew Freon out when the serviceman came out.  This, of course, was on a Saturday.  He promised to fix us Monday......didn't make it; Tuesday, the same.  We got up to 87° in the house.  We used two fans in the bedroom so weren't too miserable at night.  A record heat was recorded for one of those days.  Finally Wednesday he came afternoon and worked until ll pm. to get us up and running again.  Not many people will do that.  They pack up at 5 and come the next day but this boy (31years old) has worked on this ancient AC for a few years now and we are very happy with his work.  Note:  of course, now that the AC is going, we are having an unusual cool spell!

Hay is all done and paid for.  So two down and holding.

We are getting sporadic rains now which are very welcome."

I think that catches up except for the normal daily chores for the farm.

We are in a cooler period, mid 50's this morning.

I mowed the yard yesterday afternoon.  It had rained in the morning so I caught a break with dry grass.  It has been hard to do that lately.

I still need to mow  around the shop and milk parlor.  DH brush hogged one of the fields.

Seems like one of us is on a mower full time.  This has been the greenest August we can remember!

Today will be a day of controlling weeds in places that can't be mowed.  I will be using herbicide.  There are no bees so I won't feel so bad using it.  This will be grasses and tall woody weeds.

The  only above and beyond cooking has been peaches.  A varmint stripped our trees; also got the honey pears! We suspect a raccoon.

We went to a local orchard and bought 3/4 bushel of peaches from the Missouri boot heel which is where most Missouri peaches come from.  They were not the most flavorful peaches but they are adequate.

I froze 11 quarts and made two batches of jam.  They made particularly pretty and tasty jam because the the red around the stone.
(Started again, Friday 8/28/15)

Just a personal note here.  I have had a really bad flare up of polymyalgia rheumatica and finally when it sank into my brain that was the problem, I gave in and saw the rheumatologist.  They took me in within  two days of the  call and I am back on Prednisone.  This is a near miracle drug for PR and works in just a  few hours for me.  I went  from needing help getting into and out of the car and truck and yelling in pain when I did get up to making a pound cake yesterday evening around 5 pm.  My first dose was at ll am that morning.  The doctor told me  to walk across the exam room for him.  Then he said what a change from last visit; I walked like an old  woman.  He clapped his hands over his mouth grinning.  I said 'Doctor, I am  an old woman!'.  We both had a laugh.  Today was even better.  I made the bed, folded a load of laundry, cooked  breakfast, cleaned up dthe kitchen and our bathroom..........the went outside and chopped a few tree sized poke bushes and harvested the peppers and eggplants......cooked lunch and am now typing.  For  me, that is a Wow! day.  I have really felt bad for a couple of months but just couldn't seem to realize what my problem is.  Along with the muscle and joint aches, you have  general malaise and that old bugaboo 'depression'.  Enough said.  You might keep these symptoms in mind if you have something the doctors can't seem to diagnose.  Two simple blood tests will give them a good clue. A sed rate and a c-reactive protein test.

Now back to  normal life:

The Gala apples we got were almost tasteless.   I bought some Jonathon's at an orchard at Marionville, Mo. and they were good but extremely tart!  Jonathons are my favorite for pies and fried apples, in fact, for lunch we  had sausage and fried apples and potatoes.  Now that is a real down-home meal Mom made but she also had gravy and biscuits with it.

Harvest of peppers and eggplants 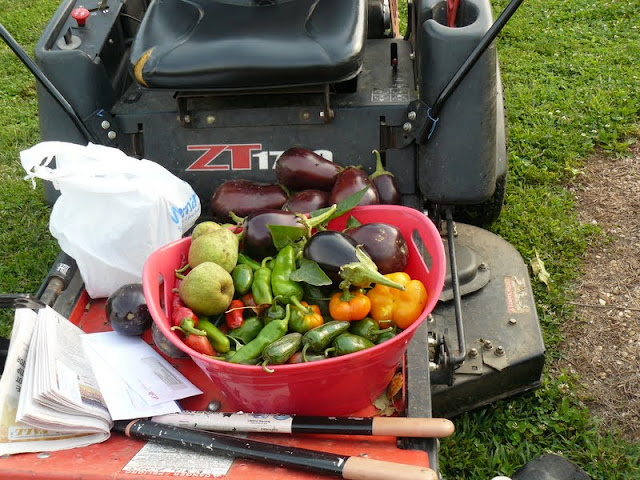 Note:  I also raided the freezer for a few days of meat that is in the plastic bag and drove to the mail box (across the road)  for  DH's paper.

I may toss most of the egg plants.....but I want to try eggplant parmesan  first.  The peppers are a mix of Jalapenos, yellow, red and green cheese, Maule red and Anaheims.   I believe to may have overdone the pepper thing!  Will be making lots of sweet Jalapeno relish.

I planted one hill (5 seeds)  of  Long Island  Cheese Squash/Pumpkin in the large bed in front of the propane tank.  It is maybe 25 feet wide and the LIC squash has covered it from one side to the next!  I see a varmint has already been nibbling on one of them! 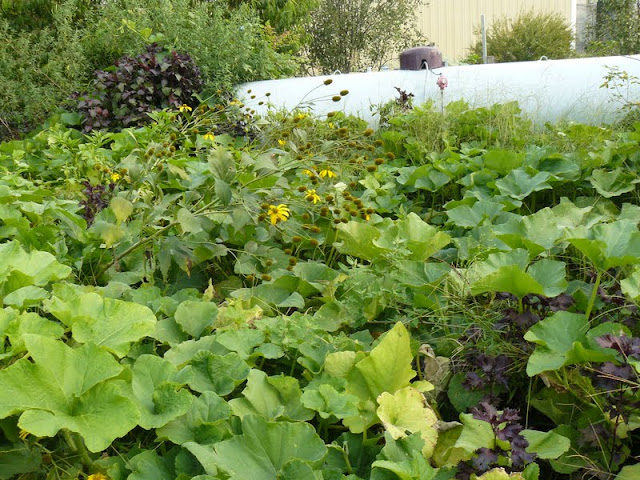 Finally a very large sunflower gift from the birds.  They haven't begun seriously attacking it yet.  I think it hangs over too much. 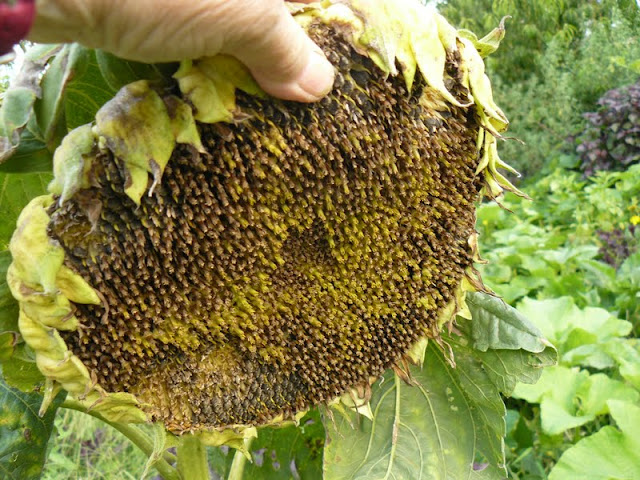 Enough  for today.  I took a few more pictures but  will post later.