Yogurt - Orders all Arrived-Day off

Milking went semi-well; she is still not letting down the cream. I am getting about a gallon and a guart daily.

I decided to make yogurt this morning. I made two different batches, one using l quart of milk with a freeze dried culture from a blogger friend and a half gallon one using Dannon plain yogurt as a starter. I could barely fit it all on my heating pad. 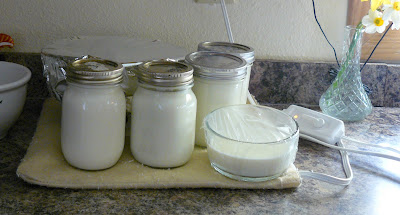 and with a towel wrapped to retain the heat from the heating pad. 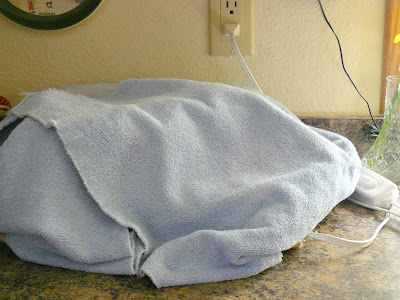 Of course the minute I got the milk heated, I found that the Dannon yogurt that I forgot to freeze was molded! So I turned of the heat, head to the local market.
I was ready to restart the process an hour later. The milk was still around 120° so nothing lost except a skin had formed over the top that I had to remove.

Later in the morning UPS delivered my onion order and the fruit trees from ACN.
and later still the mailman honked out in the drive. He had my order from Amazon. I was using up a credit. I got the box of plastic wide-mouth lids, a new long- handled wooden spoon especially for canning and a wand magnet to lift lids out of hot water and a new large stainless steel funnel. My funnels were plastic and I don't really like to use plastic in any canning process and they were small. I am now ready for harvest.

By now it is time to make lunch. I think I will take the rest of the day off from outside work. I think I need the rest....I don't have quite the energy as when I was on Prednisone! Too bad you can't take that like a vitamin pill. I felt super terrific when taking it. I am beginning to believe the polymyalgia rheumatica is a little like fibromyalgia regarding energy or lack thereof!

I am happy to report both yogurts were a great success. The Dannon makes in 7 hours but the freeze dried takes (or says) 24 hours. Both were very creamy and thick as you can see.

This is the freeze dried starter: 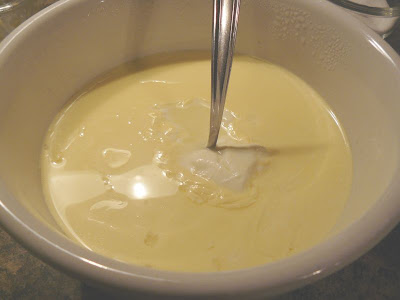 and the Dannon starter, 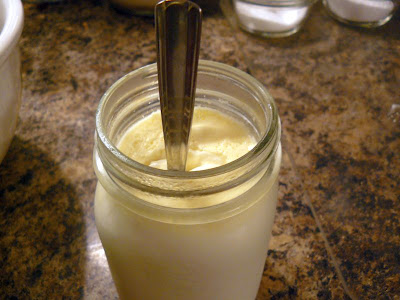 The yellow is the cream that rose to the top. Now I need to cook down some more frozen cherries...I love them in the yogurt.

We are off in 30 minutes to the doctor's office for DH's stress test...It will be a long morning; I am taking a book to read.
Posted by gld at 7:07 AM