I  am now spending part of the night in  my kitchen recliner. After about 3-5 hours, I  wake up and feel  stiff and sore and change to the chair and  it goes away.  Strange, but it works.  Usually I go back  to sleep very quickly but often read a while first.  It may not be the deep sleep the doctor says I must have but it is  working for me.  His muscle relaxants were useless.

For some reason yesterday I saw three varieties of butterflies on the zinnias.  I  tried my best to get some shots but they were almost too fast for me.

This is a Spicebush Swallowtail: 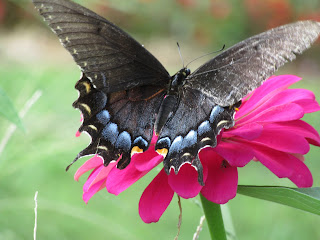 and this is only the second Monarch I have seen, missed getting the open wings, 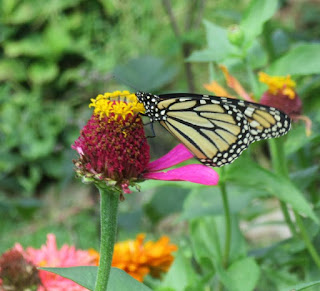 and a Tiger Swallowtail:

and this morning was the real stunner.  I saw dozens of them.  I did my best but it was none too good.  I haven't mastered this new little Canon. 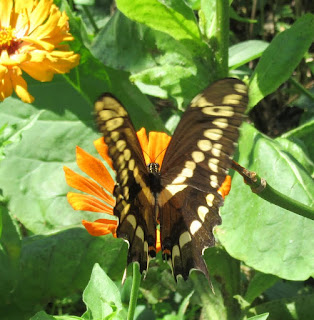 They made my day!

I managed about an hour of outside work this morning.  I think I have finally finished the front ditch on both sides of the drive.  They are not photo worthy.  I have just trimmed/mowed/sprayed all weeds but some perennial and ground covers.  The goal is to have all good plants so that I can just let it go and do its thing!  I have enough plants that should do well in that environment (I hope).

I see out the window my poor Long Island Cheese plant is wilting in the hot sun and that is with a l inch rain two days ago.

The beetles seem to be fewer.....but I still find them on the roses and rose of sharon.  I am  at the squishing and drowning stage with them.
Posted by gld at 2:02 PM 14 comments: 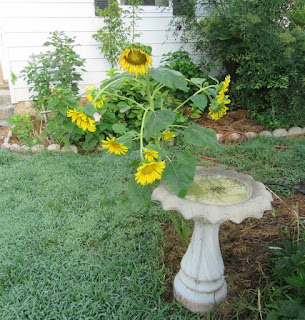