As you can see I did get the beans picked.  Even though it sprinkled rain....that is another beauty of the hoop-house method.  I stood inside and never got a drop on myself. 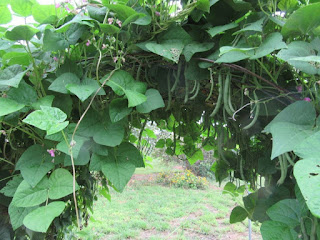 This is the Trail of Tears beans,  first picking on just one cattle panel.  They are pink blooms and are black seeded. 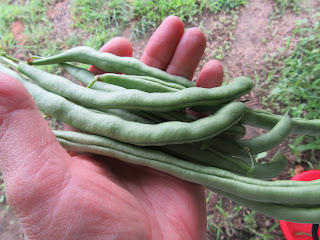 I can pull them off in handfuls.  Couldn't use my left arm but the right worked great. 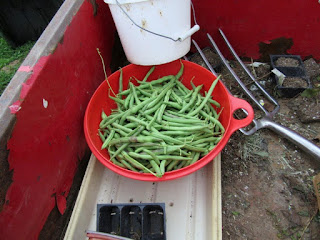 Harvest, maybe two gallon.  I cooked a quart for dinner and will freeze the rest today.

This is the third harvest from  the Kwintus/Early Riser beans.  I vowed not to pick anymore, but Mom's influence of "waste not; want not" is indelibly imprinted on my soul.  DH came  along about half way done and helped. (a First!). 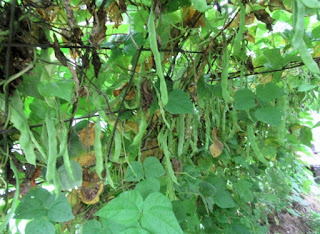 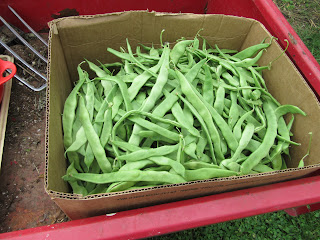 The first is inside the Kwintus hoop house  which is three panels.  The bottom is harvest in the top of the apple bushel box.  We haven't started them yet.

We broke the others yesterday while watching Midsomer Murders through Netflix on the TV in the living  room.  DH helped with that too.  Will wonders never cease......

I freeze all my beans but think the Trail of Tears would be good canned.  They stay very firm after cooking and do no get 'squishy'  like some  beans.

This is now Tuesday, August 29.

Happy to report we finished with the beans.  I now have 19  quarts in the freezer.

I started on the apples and just did enough for a cobbler and l quart in the freezer.  There is no rush on them.  I plant to do a few each day until they are done.  I save the cores and peelings and cook them for juice for apple jelly.

I haven't done anything outside since the fall but will try to get a few things done this morning.

We are having another cloudy, cool morning.  It is supposed to rain later but not much promised.
We really don't need it.

I took advantage of the cloudiness to take a short tour of the east yard to take pictures of a few things in bloom.  Some are looking the worse for wear. I leave the zinnias and salvias for seeds.  I have my best zinnias in years all from self-seeded zinnias from last year. 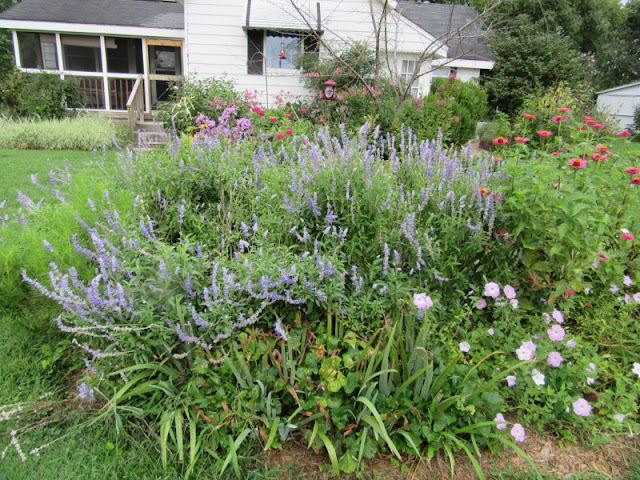 The blue are the salvia farinacea which are almost perennials here.  Note the bright colors are the self-seeded zinnias.  I left the dead peach tree for a hanger for bird feeders.  I will have to take it down before too long. 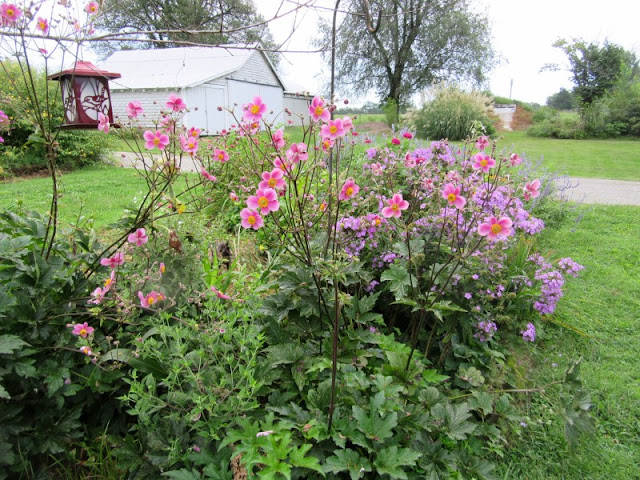 This his spotlighting anemone rosbustissima.  It is a great filler and fall bloomer.  I started with three plants and it has spread nicely.  I saw a hummer visiting this morning. 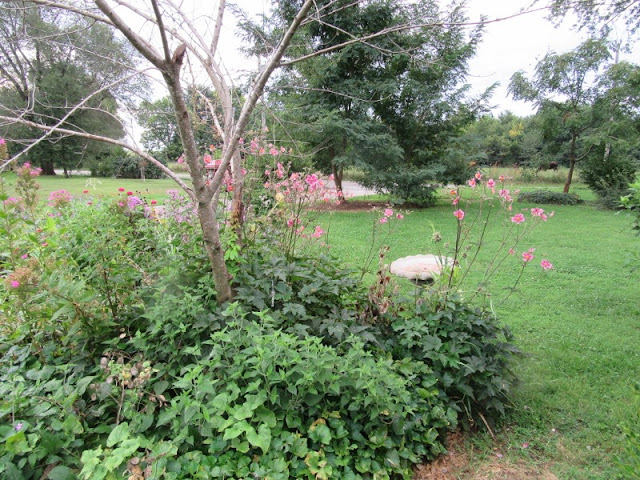 Another view of the anemone.  I like how it is taller  than surrounding greenery. 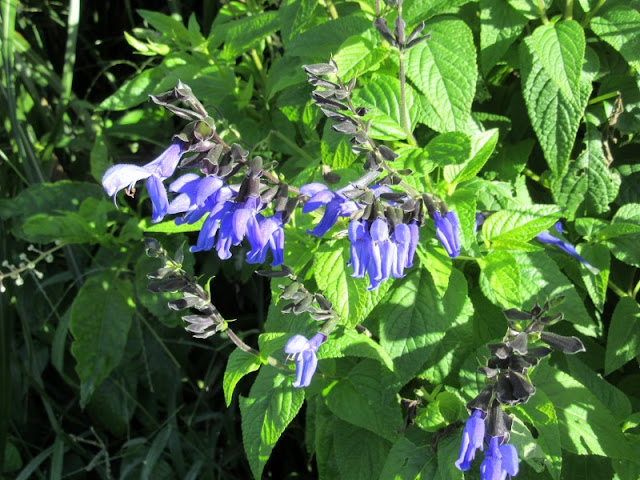 I took this on a sunny day because the blue of the Black and Blue Salvia was just beautiful next to the green leaves.  This one is supposed to be iffy in my zone but had done extremely well here.

Max mowed for me yesterday.   I took a very had fall doing a very foolish thing.  I wanted to measure  the new bed (from MIL) for slats and was trying to prop the mattress against the wall. I had to step inside the bed frame to do it.  That went fine; then I stepped out and snagged my left foot on the bed rail and fell flat on the floor on my left side.  I did this yesterday morning....now have bruises you wouldn 't believe and can't
lift my left arm without assistance....I am left handed.  All is well; nothing broken but I will be several days getting back to normal.  DH was not happy with me for doing something so foolish. I am frustrated by not being able to do things that I have always done before.  I have learned my lesson!

He has more mowing to do today.  I hope I can pick my hoophouse pole beans using my right arm.  I hate to let them go....

One thing I managed to get done between rains was to plant the west berm of  the living  room foundation.
This has been an eyesore that worried me for a long  time.    It finally occurred to me that it would be a good spot for a hosta bed.
I kept my fingers crossed it would not be filled with rocks and roots.  I should have known better.  This was a fill of lush black Ozark soil with nary a rock nor root  to be  found.  The previous owner was a gardener, bless her heart.

I have three more  to put in and then I will mulch it heavily.

These were very nice plants and  some are giant  varieties that will take 5 years to mature.  How is that for optimism!  I  bought them from Gilbert Wild and Son in Sarcoxie, Mo.  I have bought lots of daylilies and iris from  them before. 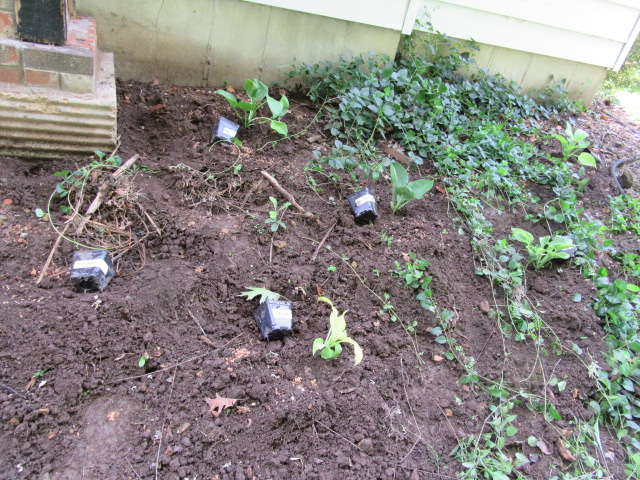 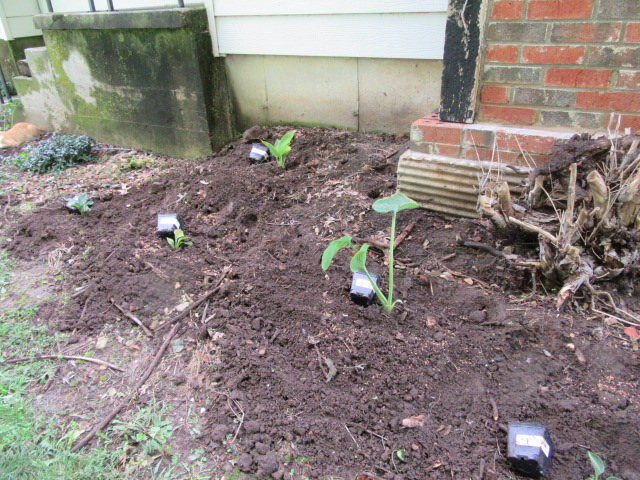 There are 18 in all. I have two varieties of vinca here and  there that may fight  with them.  I will have to be watchful.

I also bought another rose, Neptune, a lavender hybrid tea that was at the peach orchard.  I couldn't resist the fragrance.  It is a huge potted thing and I want to find  it a spot that  I walk by often.  I am thinking on the east side of the smoke house by clematis Nelly Moser.  This would be on my way to to the garden gate.

I am slowly weeding,  feeding and mulching around some plants:  I have done rugosa rose Blanc double de Coubert, two clematis, and the new Red Haven Peach tree.  I still have lots of bags of mulch left so will be working along as  the weather  moderates.

I promised myself I  wouldn't expand the gardening but what I am doing is trying to consolidate things so that there will be fewer beds more intensely planted and less to mow around....wish me luck.

It's a beautiful Saturday on the farm.  We have been getting lots of rain, almost daily.  Another 5 inches this past week.  Everything is green and  growing....including the weeds.

I have been trying to get out each morning and work an hour or 3 but some days it was raining  and others it was just too wet to even pull weeds.

This morning I did get some  things accomplished.  I started getting the hummingbird bed  outside the kitchen weeded and cleaned.  Several zinnias and nicotiana were finished and needed to be pulled.  I am rethinking the bark mulch.  My vigorous weeds come right through it and  it will need replacing yearly....very  labor intensive and costly.  If I just had a few simple beds near the house, it might be workable but for cottage-style or  country gardening I don't think so.  Of course, I still have 30 or so bags that I will use but mostly at the base of specific plants like roses or clematis.  The rest will be used in the narrow garden  fence border.

The garden is almost  finished.  The determinate tomatoes are done and I have very few of the other kind.
Still waiting  on the late pole beans.  I have canned a few pints of tomatoes.

We have been having fun capturing the beast menagerie on the game cam.  That seems to be the only way we can capture them.

Here was a surprise:  An armadillo 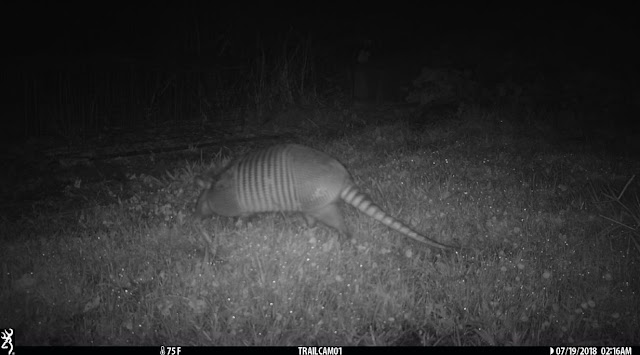 Of course, we knew there would be possums: 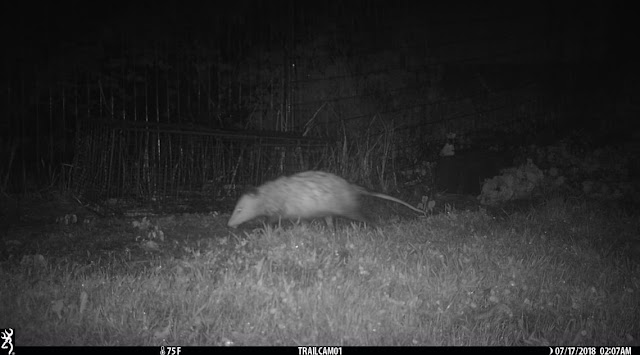 This is our least favorite rascal, the groundhog enjoying one of my apples. 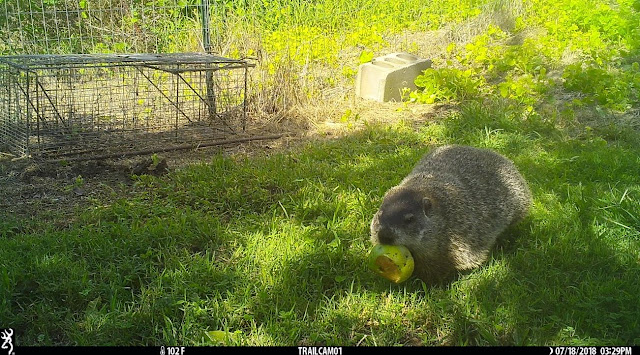 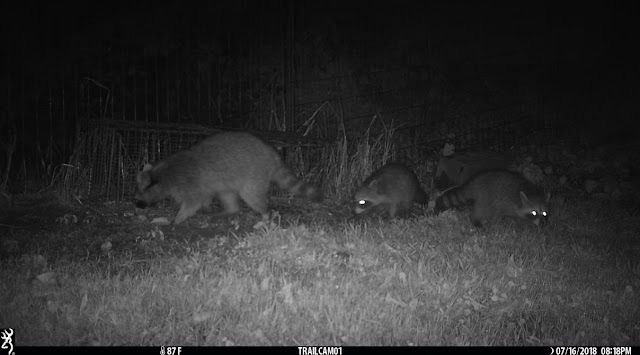 These were all taken out back in my garden behind  the house.

It is now August 21, Monday.  The eclipse is over.  We never got the full whammy but about 97%.  It stayed much lighter out than I thought it would.

We got another 3 inch rain overnight.  We are beginning to smell swamp-like outside.  I seem to be very susceptible to mold and have been coughing and wheezing like crazy.  Today I  decided to stay inside.

I made another batch of peach jam.  This is the second batch and they look completely different. The first were made from very small dark peaches and I used some old pectin that had darkened with age.  Made for a  very dark  jar of jam.  It tastes fine but not so pretty to look at.

The one this morning  was made from a very large pale peach that was still a bit tart.  I also had some newer pectin and it looks like peach jam should. 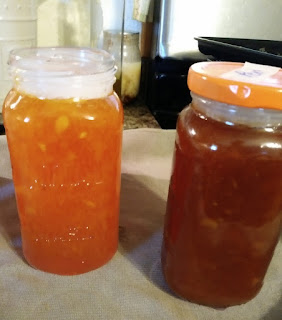 The tomatoes are about finished.  I have a couple of plants that should hold us for fresh tomatoes until frost.
The determinate ones and done.    I have canned a few pints and have two trays (l0x21) yet to do. 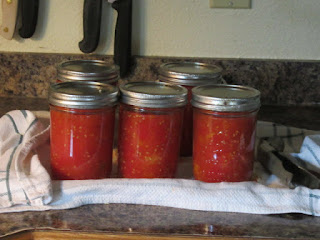