A Busy Morning on the Farm

Well, I have gone almost a month without posting.....shame on me.

It is spring in the Ozarks, still not past a danger of frost but settling in much warmer.  We are dry but are hopeful heavy rains will visit us next  week.

I haven't mowed yet and grass in the yard and field is coming along very slowly.  I hope heavy rains will correct that.

I have been busy trying to get ready for gardening season.  I sorted my seeds according to what needs planting under lights now and next month.  I checked and have enough potting soil to fill all containers.  I might actually get that done this weekend.

I have re-tilled  my tiny little garden plot that I now  call the cat's favorite playground and litter box. They  run and bounce on the soft soil and roll around in it.  They are fun to watch.  I may not find that so amusing when I plant seeds.........may have to use temporary covers of some sort. 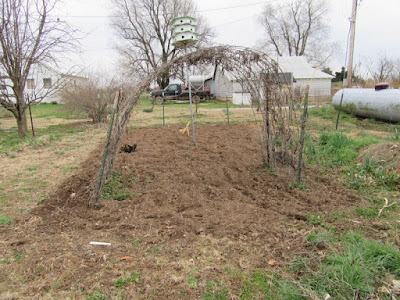 Next job was getting my dedicated rose bed started.  I have almost sworn off roses because of Japanese Beetles and RRD (rose-rosette disease) but they are so irresistible that when Lowe's had a rack of them out front I couldn't resist!  They know how to market them!  I bought 6, let's see if I can remember them:  Olympiad, Medallion,  Mr. Lincoln, Tropicana, Queen  Elizabeth,  and  Love.  (I actually did it).  I have copper markers by each one knowing that in a week or so I won't remember. 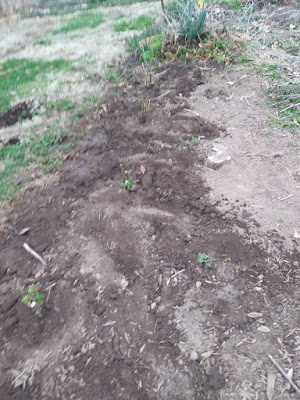 I will to under plant the roses with some perennials. The plan(hope) is having them in one location will make me take better care of them.  I will also have to walk past them going to the garden almost daily which will be a good thing.  Most are chosen for fragrance.

I have lots of daffodils in bloom, 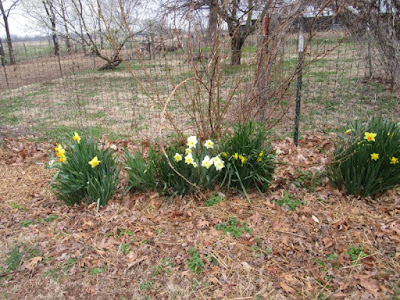 This was before I pruned the rose, Aloha and below is after: 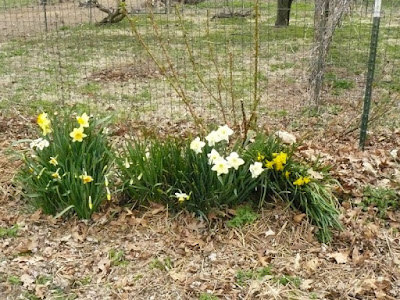 I pruned most of the clematis the two needing it the most are the Type 3 that should be cut  down to 18inches or so each season. 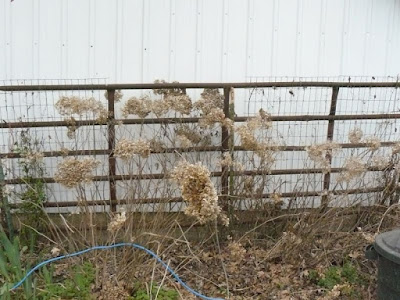 I have two type 3 planted on the right side of the panels. they were hanging over the chicken yard fence to the right of the barrel. 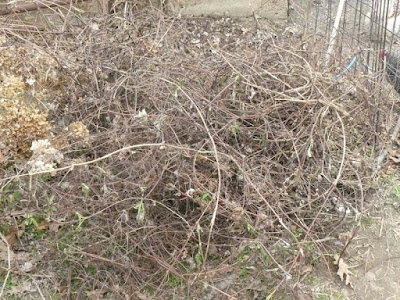 Just two or three more to do and they are Type 2 which don't require much at all.

I am done for the day!

Morning at the Homestead

I am getting back in the habit of taking a very early morning stroll about the immediate homestead.  Max will be happy to note that I am also letting the girls our to graze!

He had warned me that the Light Brahmas are prone to fly up on him............that would unsettle me to the point of flight!  However, they didn't bother me at all. He said it was because I was not carrying any feed with me (which I will now never do).

They immediately began pecking on the ground around my feet.  I found out later that DH had scattered some bird seed to call them in last night. 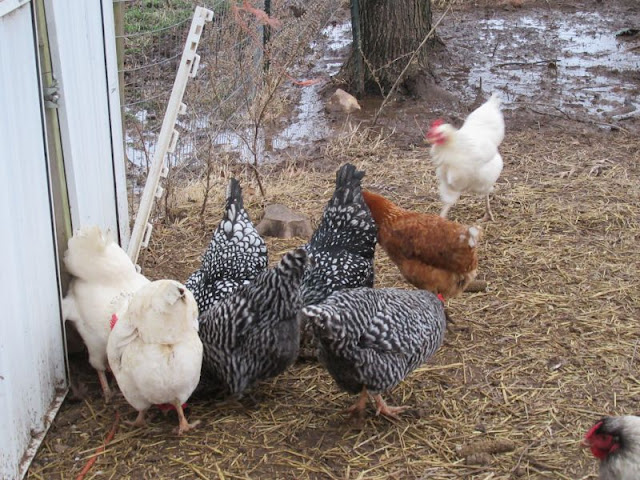 Once that was cleaned up they spread out.  Note there is still some standing water in the run.

I was near the small group of cows that we keep near for feeding grain and whatever.....I have lost track of the reasons.

Cattle this time of year look mangy.  This is due to lice which will disappear as soon as the sun starts shining on a regular basis.  They will also loose the longer hair and slick up and look much prettier.

This is most of the group at one of the new (expensive) bales of hay we had to buy.

We have a few with horns due to the introduction of the Jersey genetics.  At some point we will have the heifers dehorned and sell or butcher the horned bulls.  See the new baby.  He was born to a poor old, crippled cow that will not get better but she still bred and calved.  We will hopefully not get her exposed to a bull again and sell her.  I am embarrassed for anyone to see her.  The dark red and lighter one to her right are the retired milk cow and the temporarily retired milk cow, the Jersey.

I think that is her baby next to her with the horns.....she will get dehorned.

First the clump of daffodils that were the first to bloom, 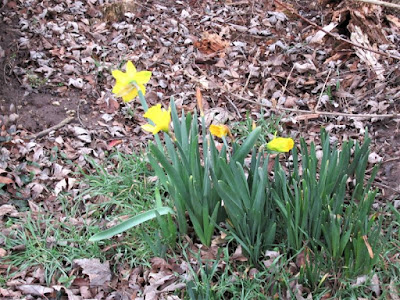 I saw another lonely little clump back by the gas tank, but most are in the bud stage.
I like how Mother Nature mulched lots of things with windblown leaves.  I never ever rake leaves. 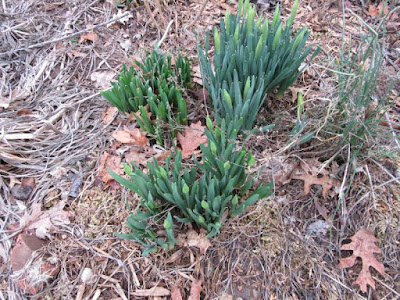 Some perennials are sneaking through the mulch but I fear for my new roses.  They are dark black. 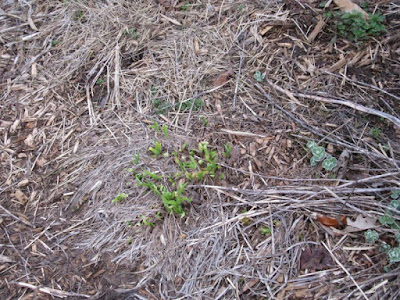 The above is daylilies in Kerria Bed 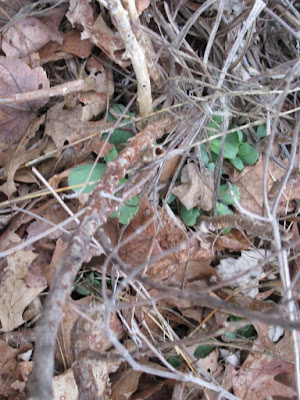 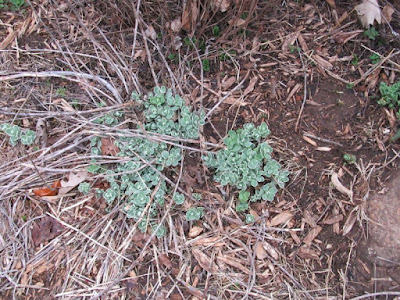 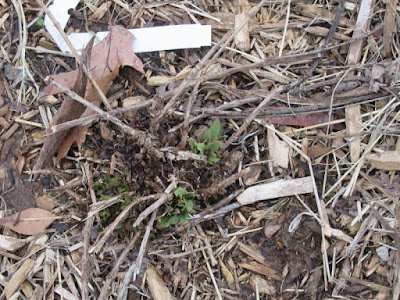 This is a new salvia I planted late last fall.