Sometimes  this is a good thing and sometimes it is not!

In the case of my Dame's Rocket it is a good thing.  I started with these: 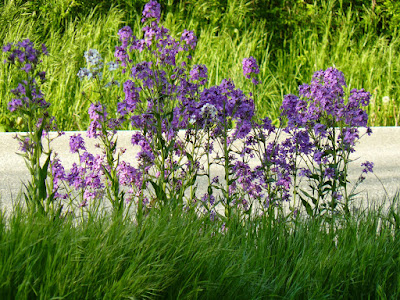 Then one year I had some white ones.  Since I hadn't  any whites to cross with the purples I am thinking these were self-seeded and the white genes were in the plants. 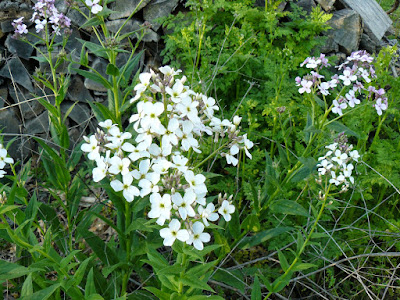 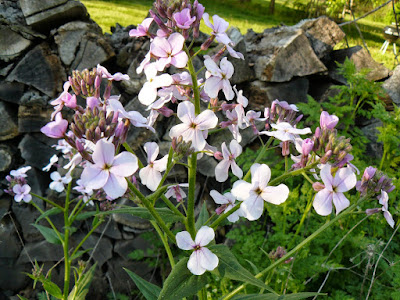 They are all fragrant in the early morning before the sun is up good, probably at night to but I am not out there then to check!  (I am early to bed/early to rise).

I have been sticking  to the l-2 hours a day trimming until the showers began yesterday and today.
So far, we have just had about 1/2  inch.  We need several inches.


Finally the recommended  Contractor responded with a feasible bid to screen in the dining room porch, lay tile flooring and build a custom screen door. He said it will be about 3 weeks....in the meantime, we will clear cut the honeysuckle vine in his way. It needed to go anyway.  I am very excited about this project.  Now we can enjoy the outdoors without cats and puppies and wasps and other flying creatures and no maple seedlings to sweep up.  I will take before and after pictures.  We will leave the house siding as is in case.......it is just a screened in porch; not another room.
I am delighted. I plan to get a bid on enclosing the very small entrance porch that one person has used in 23 years! I want to make this my tiny computer office. It will be about 4.5x6 and is right off the living room.
Dont know yet if I will have a door to the outside.
5/7/15
I trimmed the garage wall and the east end garden, l hour, put my tools away (DH will be delighted not to have to do that later in the day......) Came in and have a new recipe of oatmeal bread going. Interestingly it calls for a teaspoon of cinnamon to 5.5 cups of flour. I don't think the taste will be significant. The dough looks good and is now in the l hour raising period.
It turned out great; just a faint taste of cinnamon.  The only negative is that loaf is dense right at the bottom crust.  I don't know what causes that.
Each day something new  blooms:
Clematis by old chicken house with Blueberry Bliss iris:  I Think the clematis is 'The President' 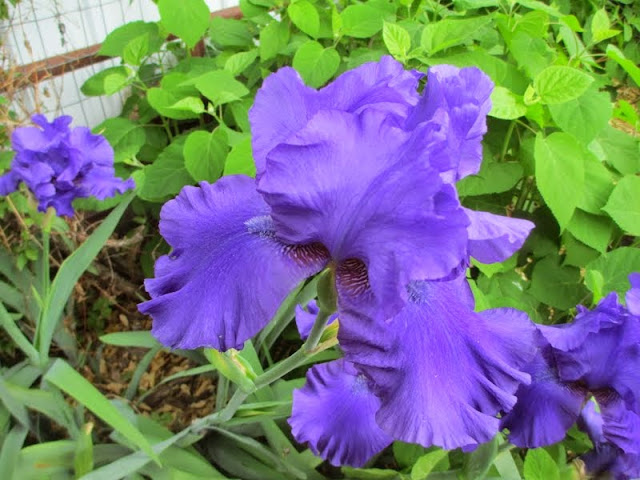 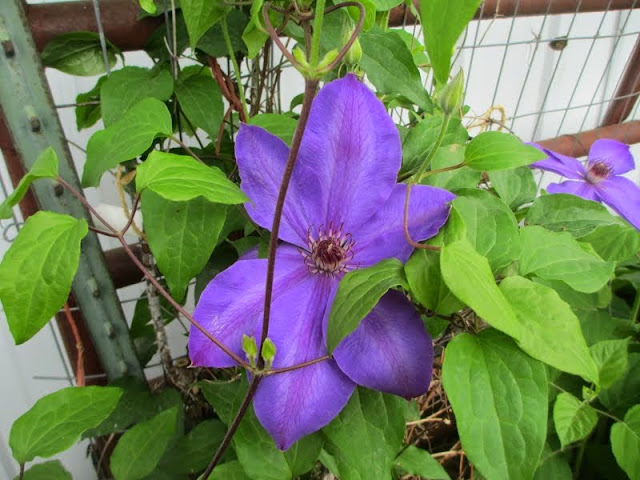 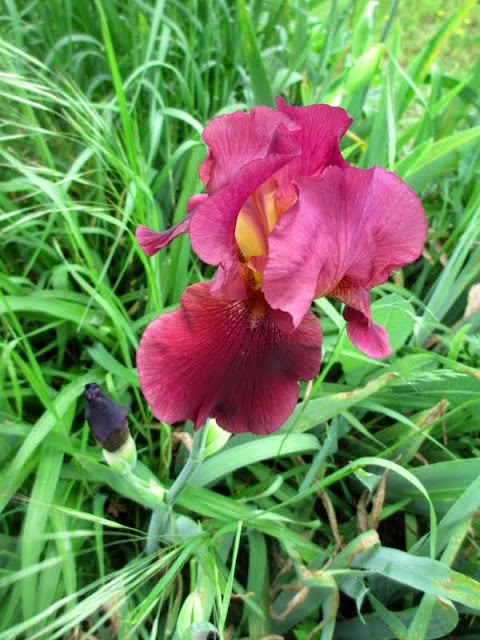 Do iris cross pollinate on their own?:  This didn't have the edging before and it is near Wabash: 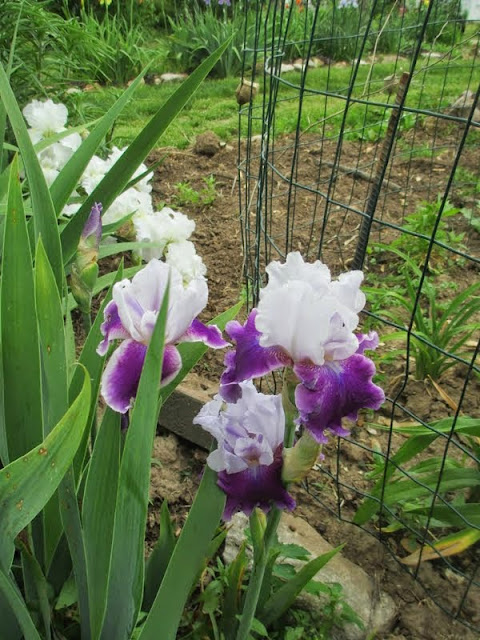 This was moved from cellar bed where it was buried from view: 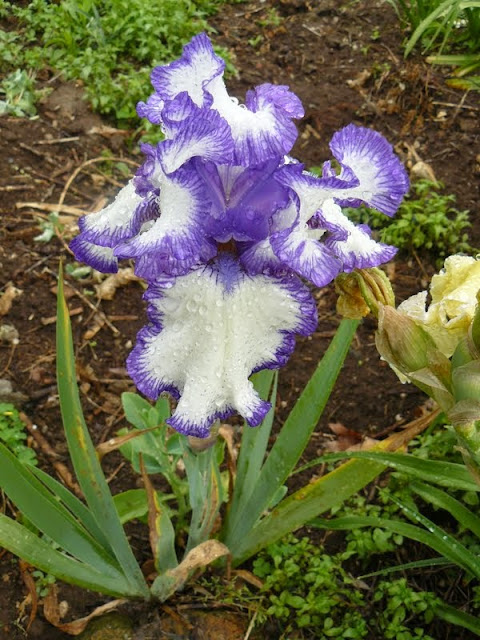 and iris 'Swingtown' in the wellhouse bed: 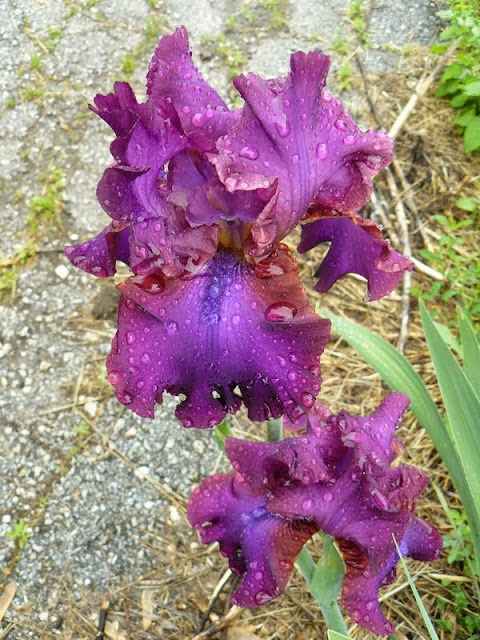 The bed is a little bedraggled after the rain: 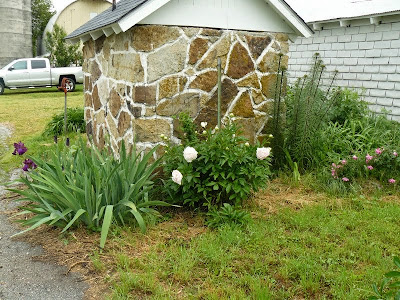 Lilies will be here shortly.  I see the clematis behind the pony has dropped down.....need to do something about that.
I should have lots of self-seeded poppies later: 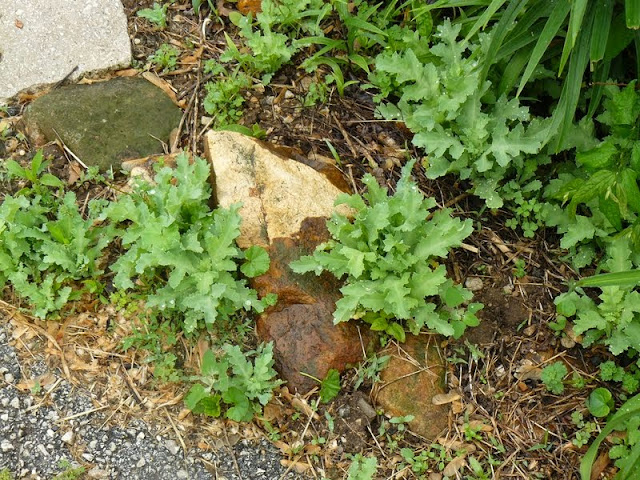 This clematis H.F. Young by the garage and near the garden gate 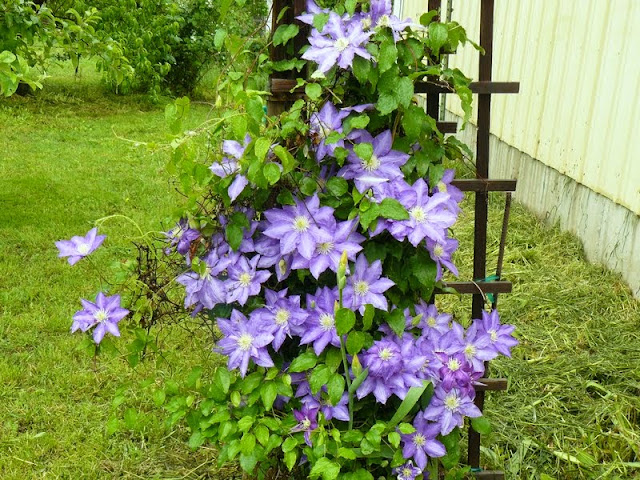 Please note the wall of the garage bed.....this had weeds three feet tall a few days ago.