Minimal News from the Farm

The cold front arrived.  The temperatures  will not be above 70° all week  with nights down in  the 40's.  Still no frost or freeze in the forecast which is a little late for us.

This reminds  me  DH is needing new insulated coveralls.  He will remind me soon.  We set the trap in front of the gas tank but haven't checked it yet.  I am encouraging him to shine his spotlight out the back door for me.......he checked; nothing.

Nothing new on the home front except for me making English Muffins  (2nd time) I also made two loaves of Oatmeal Honey WW bread at the same time.  When I finished I was beat.....you have to cook the muffins on a griddle and stand over them all the time.  The good news is I was  very happy with the results.  I vowed never to make them again.......then we had a half split with butter and orange marmalade....I might do it again.....maybe.  What has peaked my interest is making orange marmalade.  I have found a recipe but will have to make a grocery run first.  I had bought a store brand  of marmalade for the muffins and we both liked it very much.

The yard and garden are now pretty much in fall mode.  I did catch a self-seeded Laura Bush petunia in the middle of a patch of weeds.  The color isn't true but is much nearer the fuschia of Laura Bush.  I hope she has self-seeded in other places because I am sure this one won't make it before a freeze finishes it off. 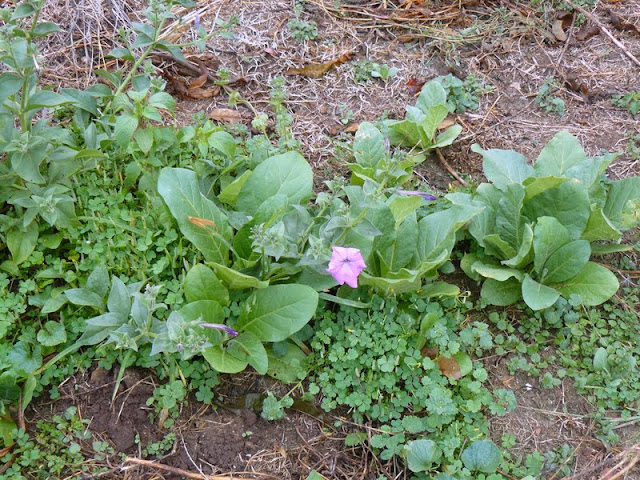 They finally got around to finishing our new road topping. Doesn't it look nice?

Have a peaceful, happy Sunday.