Another cold front has arrived bringing a very light misty 'freezing' rain.  It is 22° now and will get down  to 18 tonight, not too bad if we  don't get anymore  ice.

Busy, busy day yesterday.  First of all DH told me we were getting low on hay and needed about 100 more bales....so I spent two day or more searching via the internet and finally located some not too far away.  Then the communication began (nothing is ever simple), about each person's schedule.  DH located some that could be delivered soon.  So we took that too, way too expensive for beef cows but they have to be fed.  Our late fall drought set everyone back about 2 months on grazing  days so hay is almost non-existent here now.
The other hay can remain stored and be moved in several trips by some local boys.

Then the  carpenter did finally come and he was here almost all day.  At 1 pm, the insurance agent arrived to discuss new policies combining autos and farm owners.  He was here two hours....meantime our local surrogate grandson(who will be helping with the hay hauling) stopped
by.  I offered him lemon cake and milk.  While he was eating the carpenter came in the kitchen with a question and so I offered to make his lunch.  He accepted.  So now within l0 minutes of the insurance agent arriving I am making a grilled cheese sandwich (also lemon cake and 2 glasses of milk).
Amidst all this the phone rang several times regarding hay and my Sis whose refrigerator died.
Agent arrived, now have three people under foot.  Kolten left, carpenter went back to  work and  I spent two hours talking about insurance, not my favorite subject!  Max was busy unloading hay and coming in a couple of times for decision making.

All is now quiet on the farm and I am loving it.  Max is  doing  chores and then going to the neighbors and setting out a bale for him.  His tractor wouldn't start this morning.

The good news is I discovered this strange man who is doing the porches is very skilled  in simple furniture.  Here are the two examples so far. 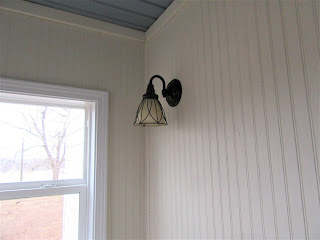 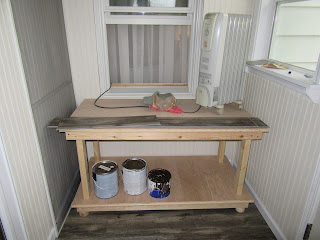 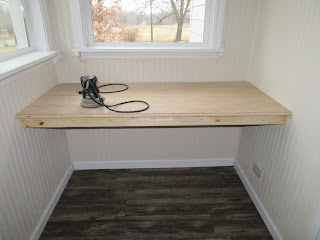 We will stain them  golden oak and finish with several coats of polyurethane.  I have decided to let him do it.  I may change my mind if the weather stays bad.

I think I will have him build a long, narrow table  for my kitchen.  My antique table is 45" square and is too wide for the  space.  I have to make people move if they are seated in front of the stove.  He said 30x60 would be a standard size and he is excited about building it.  I think he enjoys that kind of work more so than the rest and seems very proud of it.  I was really surprised when I saw what he had done.  I have lots more ideas about various projects inside for him.........

I tested the new Bosch Universal mixer on making an angel food cake and the lemon sponge cake using the leftover egg yolks.  While they turned  out, I wouldn't try to fold in the flour in the tube shaped mixer bowl again.  I think I should have dumped the egg whites into another round bowl and proceeded.  This cake  didn't turn out nearly as high.  I think I deflated the egg whites some in the folding process.  I am not in love with this mixer..........yet.  You think I could find room on my kitchen counter for another appliance? Max will not be pleased.

Yet another cat has slipped in the back door as Max was leaving and is hidden somewhere.  I will probably have to let his Momma in to find him.