Shopping Trip to the Mall

Yesterday was just a beautiful sunshiny day.  It was cold, but no wind and the sun shone all day long which has been rare lately.

It was my planned trip to the Mall with my 93 year-old MIL to pick out a bedspread for our bedroom for my Christmas present.  I was dreading it....first I hate shopping and I hate people spending money on me.

We headed into Macy's first because she has a credit card there and lots of coupons for deep discounts.  I don't have a Macy's card... We looked  at everything and I saw only one that jumped out at me.  It was in deep jewel tones...I thought it was way too pricey even on sale so I  moved away from it....even though she kept saying what pretty colors it was.  Then the saleswoman hit us.  I asked for help in selecting one and after a few questions, guess where she took us?  Of course right back to that expensive one (I smell commission in here  somewhere). I just told them both that I thought it was way too expensive. My MIL said that was what a gift was all about and she wanted me to have the one I wanted.....even insisted so I finally caved and just said Thank You.  She said she loves buying things for us and she can afford to.  I hope she is right.

I tried to get a good picture of it but the colors didn't turn out as well because of the west sun shining through the blinds but it will give you an idea of it.  My garishly yellow walls even seem toned down by the new bedding.  I will change them but won't have to be in a rush. 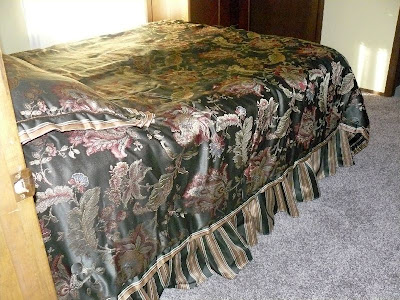 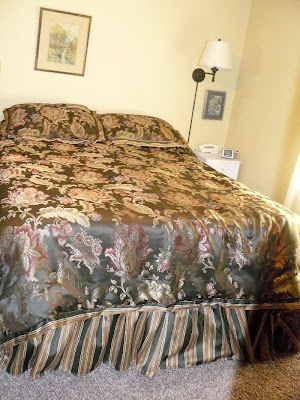 The reverse side is the stripe like the bedskirt.  The wonderful thing is we slept under it and it doesn't slip off the bed like previous ones  have and it is very light yet warm.  I am happy.

We stopped by the store and I bought some baking supplies and we picked up lunch from the deli and went home.  After lunch, I was defragmenting her hard drive and we were visiting in the family room.  She got up to do something in the kitchen and when she came back somehow she trip coming around the recliner and fell hard and hit her back on the edge of the lamp table. I couldn't catch her in time.  It just made me sick.  She had to lay there for a bit and then couldn't get up without turning away from the chair and crawling back to the seat....still didn't have the strength to get up so this old farm gal who has hefted 50-lb bags for feed for 40 years clasped her under her arms and joined my hands in front of her chest and lifted her up enough to get her into the chair.  It  was just about the limit I could lift.  She has been talking about getting one of those call button  thingies to wear and  I told her now is the time.  It just made me so sad that our wonderful day had to end that way.  I checked with her last night and she was doing OK.  She will be so sore this morning.

I told DH that you don't realize how frail (not in size!) that she is until you see her fall and realize she can't get up.  It was a shock.  She is a like me in that it doesn't take much for her to get off balance and fall.  Mine is just a dizziness thing that I have most days so that I watch where I get myself but hers is just a sort of lightness on her feet like she isn't really attached to the ground.  I know I have gone on and on here and you may skip this one but I wanted it documented for my kids and me to remember.

Now if this Christmas present wasn't enough for both of us and it was, she called later and said to be here Friday because DH's present was coming.....bless her heart I think she is getting satellite TV for her TV addicted son.  We had it once and were both too stingy to keep paying for it for it.  It makes me feel slightly ashamed.

I have always know I was blessed in the in-law department and now you know too.