The week of June 3 through June 9

Foggy and wet out.....no outside work.

Turned into a nice day with sun.

Things started out well.....I cut almost to the ground my two heirloom roses.....santitizing the pruners between each cut. Then I sprinkled about a half cup or iron rite fertilizer around the base and mulched with a thick layer of wet newspapers and then a layer of wet straw. I also did my Belinda and Pink Don Juan.....same treatment. Maybe they will come back; all are supposed to be own root roses from Chamblees.

I managed to dig up two clumps of iris, Stepping out and one a gift just called 'a good white' that were buried under the variegated forsythia that has spread beyond belief in the south end of the cellar bed. I planted two small pieces in the old Ash Tree bed. I need a new name now that the Ash tree is gone.

I have a bag left for my neighbor.....if she comes to get them!

DH worked all morning with one of the hay crew on the tractor he brush hogs with. It wouldn't start. Simple solution. It has two batteries one was weak and was sapping the other so much it would start.
New battery later; all is well. He needs to start brush hogging the fields we don't use for hay.

Hay man (owner's son) said it will take 4 days for our hay.....they are waiting for a break between showers.

Speaking of........it began lightly raining after lunch. I just went out and put things away for the day.

Lunch was yellow rice with stir fried chicken breast mixed with a hot and spicy barbecue sauce. I think I made it too spicy for DH....but he ate it all. I chopped one of our green onions and sprinkled it over the top. They are so mild and sweet......Candy onions are the best for my garden.

Have I mentioned I had an epiphany the other day while working outside. I think all my dead things: hostas, three rose of sharon and several roses are due do to my little mishap last year with Roundup.....if you recall, I used the wrong sprayer........I now have that sprayer with an orange piece of baler twine tied around the lid....I will not do that again......but if I do, I am retiring from gardening. It will be time!

Another cool, rainy day; little in gauge.
Land line is out of order still.

Called dermatologist about a couple of spots on my face.

Very foggy this morning. Had to rush. Doctor appointment is at 8:15....means we have to leave at 7:30
Took 2 hours out of our day....maybe 20 minutes in dr's office. All benign things only one removed because of location. Used liquid nitrogen.

Just quit misting a while ago. It is now 11:39 am. We may skip lunch since we had a very late breakfast. I do have a couple of minute steaks ready.

Fixed minute steaks with cream of mushroom soup, half a baked potato and wilted lettuce for a very late dinner/supper.

Milked. Sprayed 2 gallon of herbicide here and there. Weeds and garden way too wet to do anything until it all dries some.

After letting things dry some, I picked gallon ice cream container of strawberries.

Finally AT&T technician came; phone has been out of order since Sunday. He had an electronic device that showed a short in wires 900 feet west of the house! Amazing technology. He fixed it and all is well again. I am now the only person on the wire....other neighbor has only her cell phone.

DH did some brush hogging; I did nothing outside except the strawberries.

Today is supposed to be sunny and hot. (decided to mow part of the yard before the rains come again)

Corn did not germinate well; I think our cold snap was the issue. I will till it up and replant with Bodacious.

Go to Murfins and buy zucchini and crookneck squash seeds. Mine didn't come up but Ambrosia and butternut squash did. (did get this done)

Throw out all old seeds. (haven't done this yet but will)

Move day lily under white butterfly bush to more sunlight. (not done yet)

Finish mulching garden fence bed and moving some iris here. Transfer some perennials here too.
(did some of the mulching but waiting on DH to bring down the straw).

I did buy the squash seeds and two packets had bugs....managed to find enough sound seeds (I hope) to replant. I planted hills of crook neck and straight neck yellow squash, Cozelle and just plain green zuichini. Still need to replant all the sweet corn.

Currently eating the most beautiful green onions; they are already making small bulbs. It seems the reds are making bulbs more than the Candy.

I thought I could capture the rain, but wasn't successful.

This is the fairly young Jackmanii Superba that I accidentally 'trimmed' two years in a row. It is drooping under the rain but I am loving how it is going to cover that corner of the porch. 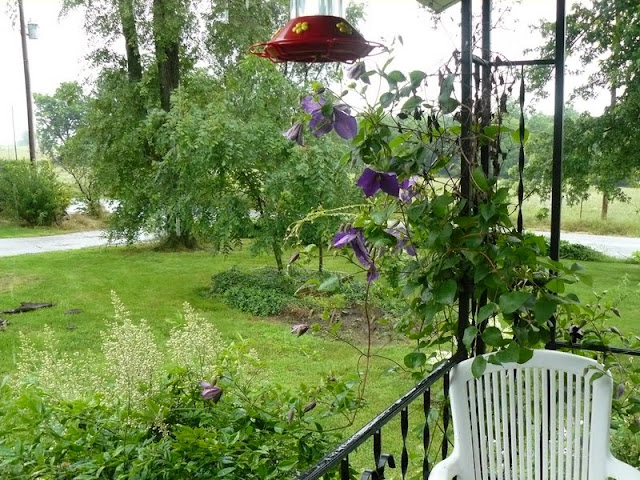 and the oakleaf hydrangea's first year of good bloom, 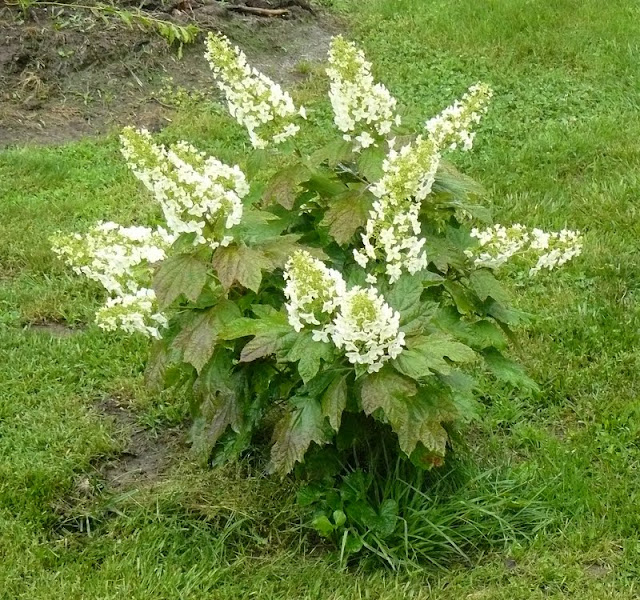 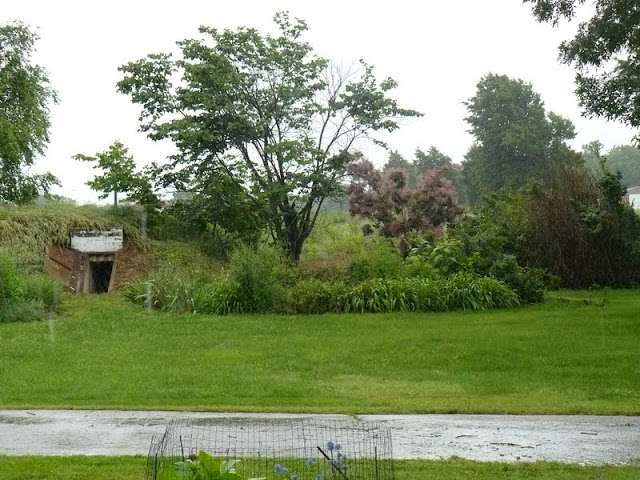 and the young green onions.  I see we ate the prettiest ones.  I had white beans and ham and wilted lettuce with the onions for lunch yesterday; plan to add potatoes and onions to the beans for bean soup today.
I made a banana cake yesterday using some of DH's overripe bananas so that will be dessert. 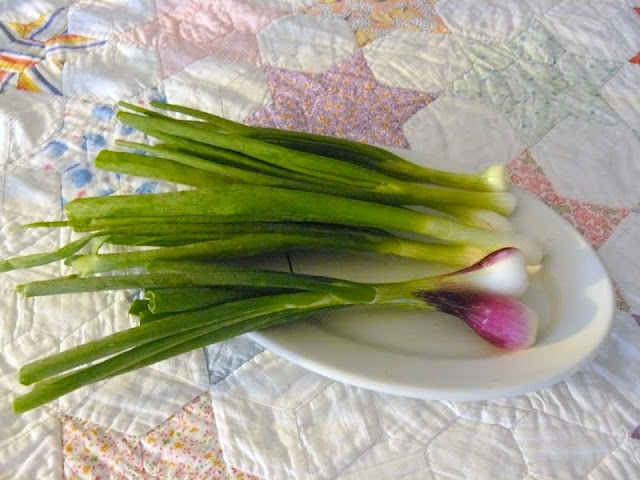