Up way too early again.

Made breakfast, eggs, bacon and frozen biscuits.  I have changed my recipe a little and they are raising better and the frozen ones bake up high exactly like the fresh ones.  I just dropped  the fat to 1/3 cup.  A nice benefit is the reduced calorie content. 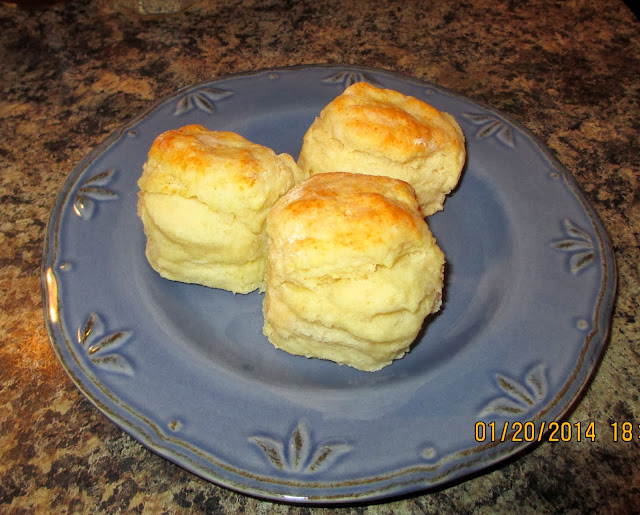 Mopped kitchen and part of bedroom where the new cable comes through. Hands and Knees mopping, my favorite.

Folded two loads of laundry.  (Remember DH does the laundry; I do the folding and putting away).

Made a new recipe of potato soup for lunch. I got it from Chickens in the Road.  Here it is.


How to make Cheesy Broccoli-Potato Soup:
4 medium baking potatoes, peeled and diced
10 ounces chopped broccoli
1/2 cup butter
1/2 cup all-purpose flour
ground black pepper (LOTS)
6 cups milk
8 – 12 ounces Velveeta (optional)
1 teaspoon garlic salt (or to taste)
1 – 2 tablespoons crushed red pepper flakes (optional)
Boil the diced potatoes till soft, drain. While boiling the potatoes, I go ahead and put the frozen chopped broccoli in a medium-size slow cooker on High and start defrosting it right in the crock.
In a large skillet, melt butter. Add flour and stir to make a roux. I start adding pepper now. Probably altogether, I use about a tablespoon of pepper, but I add it as I go, testing. Start adding the milk, a cup at a time, and stirring to make a smooth sauce. I add the first four cups in the skillet and bring it to a simmer to thicken, adding the cheese to melt. (I go with 12 ounces. You can use 8 ounces. Or 4. Or none. This soup is good without cheese at all, but Morgan wants it cheesy.) Once the cheese is melted and the sauce is thickened, remove the skillet from the heat.

Add the potatoes to the slow cooker along with the sauce. Add two more cups of milk along with the garlic salt and crushed red pepper. (We like spicy. You can leave this out or reduce it if you don’t.) Season to taste. Slow cook on High until everything is piping hot then keep on Low until ready to serve.

You can serve this straight as a soup, but I always serve it over rice. It could also be served over pasta. For a heartier soup, you can add sliced kielbasa, chicken, shrimp, or whatever you like! This is a very versatile soup, and delicious!

Note from me: I used white American Cheese and not quite as much, also cut back on red pepper. Also I will use frozen chopped asparagus instead of broccoli next time.

Up very early, 3 AM. Today is supposed to be warm...then down again tomorrow. We need to run some errands this morning:
List of errands:
Deliver a set of dishes to The Kitchen (I bought a end of year bargain from Macy's) These are the new ones:

I must admit to having a dish fetish.  If I had space I would have several different sets, just for 4, maybe with the new shelves I can indulge a little.
Stop by MIL's. She was having a problem installing a printer cartridge. I am pretty sure she wasn’t successful but she won't tell me Note:.She had successfully installed the cartridge. I am so proud of her.

Pick up a lighter foundation at Merle Norman's (I fade during the winter)I(We forgot this one!)

Shop for a standing tool chest for all our scattered tools and see if this will help DH put things where they belong! (this has been an outstanding bone of contention between us for a few years now!)WE got one at Harbor Freight but it is been to darned cold to gather up all the tools and store them.
Errands completed.

We replaced the trim in the bedroom....now need to install the faceplates (will do that when new tool arrives tomorrow).  Note: Tool arrived but still to cold to search for anything related to the job.

I spent more of my Christmas gift certificate at Amazon....bought a deep Lodge cast iron chicken fryer with a glass lid. I do love the glass lids and save all for use on my All Clads. Some from some cheap WM pans that have deceased fit them! 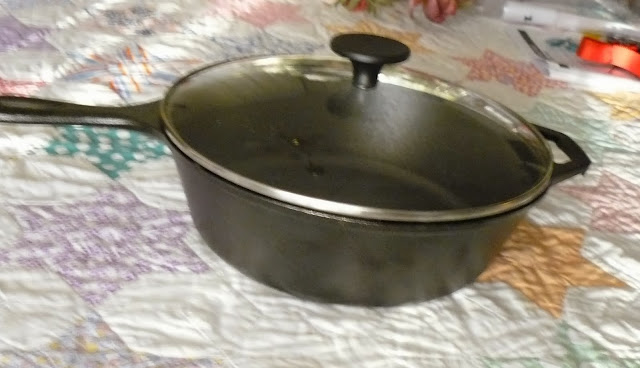 I also ordered a wireless fence system for Sugar.  I found  that it will not work at all with our steel siding.  I should have realized this but didn't.  The description of the item on Amazon also did not mention this, I have called that to their attention!  Now I have the aggravation of packing it and returning it.  I may fight them on the return fee.  Sugar has now started running to a couple of the neighbor's when we let her out.  She stays for several hours.  One of them who is so nice and an obvious dog lover has returned her twice on his ATV with her trotting along side on a lead.  We have two options....leave her loose and see if she will stay home; maybe she doesn't want put back into the pen or (this has been suggested by two neighbors, get her a playmate)

I wanted to thank the neighbor for being to nice so I baked bread again.  This time, I made 4 loaves of honey, whole wheat (light on the whole wheat) and DH took a loaf to him.

This was probably at capacity of my mixer.  It made a very large amount of dough. 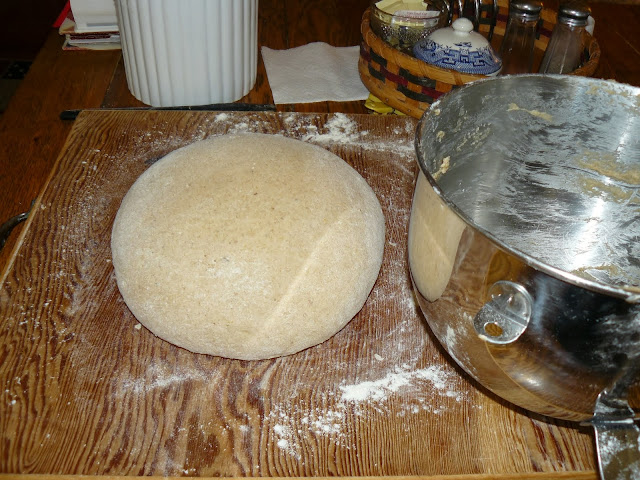 This time I let it go an extra raise before making loaves.
You can see where I punched it down the first time. 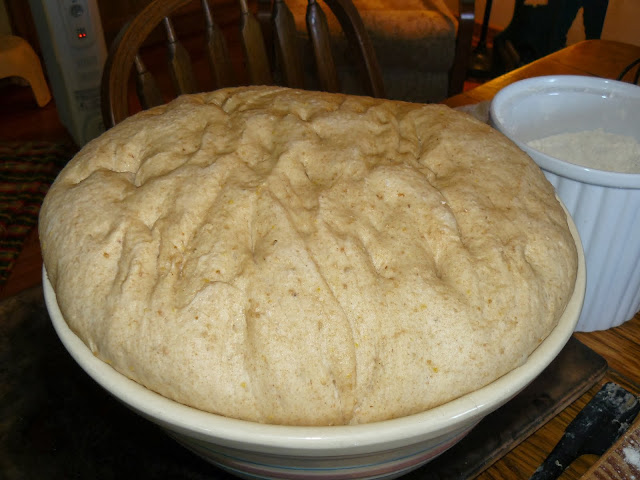 I do think it gives the bread a finer texture.
and the finished product, 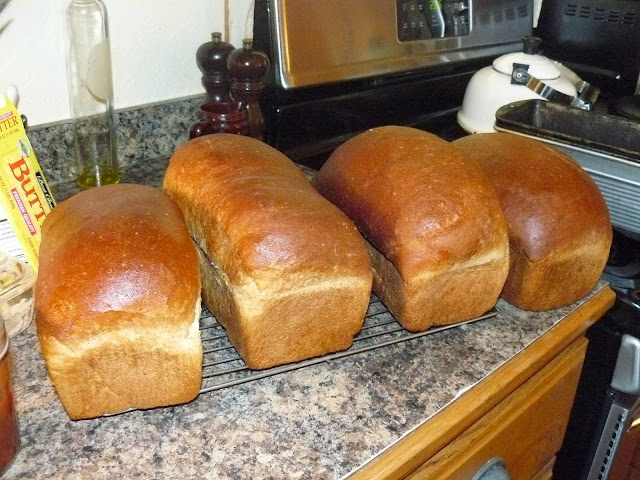 Yesterday was spent opening boxes from Amazon (dog fence, and new chicken fryer).  I was also on the phone most of the day.....that seems to happen once in a while, usually my Sis and my daughter.  I don't mind  at all.

I had planned  a banana  cake for us.  When I finally was off the phone, it was late in the day....I made the cake anyway.

I do like this recipe from Better Homes and Gardens old cookbook:

Combine all dry ingredients and ½ teaspoons salt. Add bananas, buttermilk, shortening, eggs and vanilla
Beat on low until mixed then on medium for three minutes.

Pour into 2 greased and floured 8 or 9 inch cake pans. Bake 350°for 30 to 35 minutes. Test with toothpick .Cool for l0 minutes before removing from pan.

Note: I ice with cream cheese icing and freeze one in pan for later. 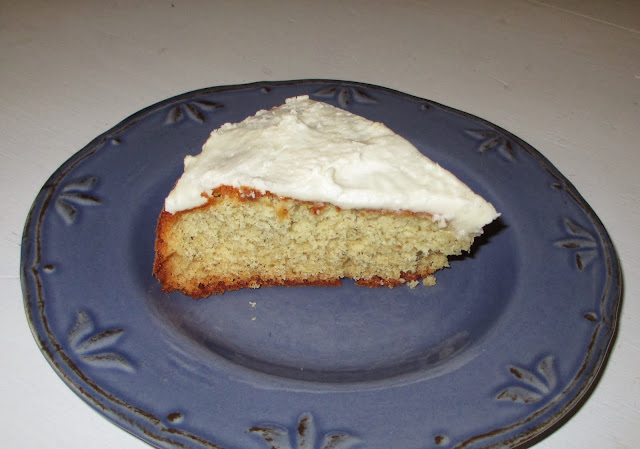