Week's Worth of Life on the Farm

I have not been taking notes......so I could get things out of order but  my life has been out of order since I posted  last so........We had guests for 5 days.

A week later had an overnight guest again.  Our granddaughter's girlfriend came down to surprise one of the boys for his birthday.  No one knew anything about it until she was ready to leave St. Louis. To say were were very surprised it putting it mildly.  It was just overnight stay this time.

The big farm news is we sold a trailer  load of calves....best prices ever.  We are feeling very fortunate about that.  The sad part of it is a very large heifer stuck her head though the panels in the loading alley and before we could get her out (she had a front leg and head on one side and a rear leg out on the other),  she died! We tried not  to think about the cost.....
We haven't lost an animal in a long time.  I used to go bonkers when things like this happened but it is part of farming or ranching.  She was the first one down the alley so that delayed things a bit.  It also spooked the other calves so it took a couple of attempts to settle them down.
I was pleased that I was able to stay out and help drive the calves into the loading alley.  I worked the squeeze gate that crowded the calves into the alley.  I wasn't in the pen with the calves at all.....I know better than that after our last near disaster!

Our 'boys' wired 100 feet of coaxial cable through the attic so I could have television in the guest bedroom, but they were rushing to the birthday dinner and left me with an incorrect hookup and two 4 inch or so holes in the living room and bedroom wall.  I was so tired after them  being here and having the unexpected guest that I left things lay until Sunday.  I figured the correct hookup to the outside antenna and have the holes filled.  My new neighbor made me two face plates out of scrap material,  even beveled  the edges and sanded them.  I am letting the foam insulation cure and then will attach them to the wall, paint, and that annoying project will be finished.

I just ordered   a new cordless drill/driver set from Amazon with our Christmas money. It was a real bargain.  When I told our neighbor (he is a retired builder and jack of all trades) that I got as excited in the tool department as some women did in the clothing section of department stores, he said when we are next down, he will show me all his tools from the construction business.  I know I don't need any more but I do appreciate them.  I have a router that hasn't even been out of the box!

My next project is to build some shelving for the back porch.  It will be very simple, open type shelving and I won't even paint them.  Just clear stain like the Swedish shelving sold.   I have the lumber bought.  Just need to cut to length and screw together (with the new tool coming next Tuesday).  I am using black screws so they will be exposed.

I plan to get a seed and onion order placed this weekend.  BTW, my Sis just told me something she learned from  someone recently.  When your onions are dry and cured, store them in paper grocery bags.  She has done some that way and they are still as firm as day one.  I now have to see if my local store still uses paper  bags and start saving for next year.  I still have lots left but have also lost a few.

Nothing special in cooking just my normal bread-making, 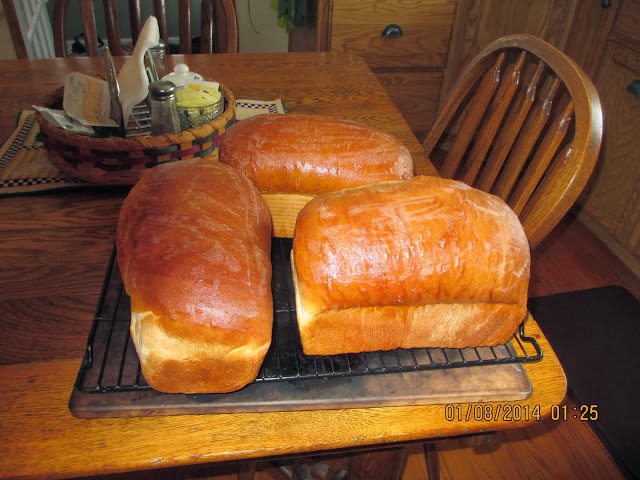 By now most know I am l00% sold on using King Arthur flour for bread making.  I am delighted to find the Walmart in Bolivar, Mo. carries the regular in both l0 and 20 lbs bags.  I wish they did bread flour in those sizes too.  I am now buying the l0 lbs size.  I would get the larger if storage wasn't an issue.  I am thinking about buying food grade storage buckets for the larger size.

Today I need to make up my pie crust that I keep in the freezer.  I cheated a little and bought the lard in a l-lb package. I hate measuring lard and weighing it.
Posted by gld at 6:15 AM