This is not something you want to look out the window and see first thing in the morning (unlike yesterday's turkeys).

I am bringing up the rear as usual. Don't they look innocent; like what have we done?

They took the long way back to the calf lot, around the garden, under the downed Elm tree and along the back fence that is lined with five and six foot saplings.(chain saw required).

We found where they broke through a weak spot in the fence that will require some serious patch work.

I decided to go ahead and milk even though I knew Willow would be down in her milk because of all the excitement. She was, but just a quart.  Here  she is coming up the ramp into the milk parlor. 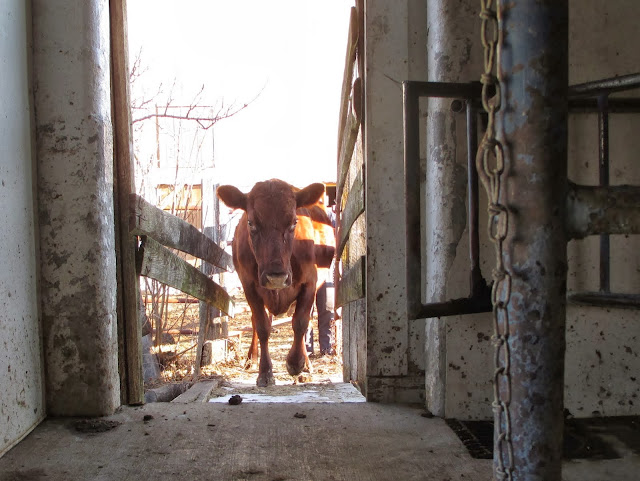 Back in the house I did a minimal amount of house tidying (bed and kitchen). I got out a loaf of bread and a chicken breast to thaw. I am making Ilene'schicken-fried rice for lunch.

Since I have extra milk now I set up a half gallon of yogurt. My Dannon starter was getting old but was frozen so I risked it.  I really only milk two or three times a week for normal use.....more if making something requiring extra.