After several days of fairly warm weather  we are  headed  for the deep freeze. Temperatures near zero and 3-5 inches of snow promised.....The snow is supposed to start  tonight and continue  on through Monday.  I may not  venture out.......

I have  been keeping a daily journal but  much is just ordinary daily life here.  I will just do a few days at a time.

It is very cloudy out this morning but also nice and warm. The next few days will be unseasonably warm but then our cool down once again.

Plans for today: Plant broccoli and cabbage in trays and put under lights.

Of course, I will have to unload the plant lights....I still haven't cleaned up that area! I keep putting it off.

Just came back from cleaning out the nests and giving them fresh water. I noticed fresh poop from some smaller varmint. I smelled skunk out there yesterday morning........also a broken shell in a nest.
We will have to keep a close watch on that situation.

I let the puppies out for a little while. They are getting farther away from the pen but came back pretty easily. I gave them treats once they were inside. They played with Sugar a bit. They howl when I leave them in the pen but not for long.

We checked the freezers before coming in. I got a package of green beans and peaches and I think blackberries out. We also found about 8 packages of hamburger left! Great news; I thought I was out. I will try to make it last until we butcher the white faced steer.

Well, I didn't get to the seeds yet. I went out early and did the chickens which just means I check for early eggs, check water and feed and decide whether to let them out or not. Since it was a cloudy cold day, I didn't. They have a nice long enclosed run so it isn't critical.
No eggs and we just got two for the entire day....they lay well for several days and then don't for a couple.

Did the puppies next. I let them out to roam for a while and won't be doing that again! I finally corralled one and carried her back to the pen. She was almost too heavy for me to carry. When I got her locked up they other two came running. I figured how much they are eating! Between the cats and the dogs, it is shocking.

I noticed the other day that the dining room window on the west side was extremely dirty with something that almost looked like spit dried on. I should have cleaned it the day before when it was nice and warm, but instead did it on the cold windy day. My hands were numb when finished but I feel better. I walk by and move the curtain just to appreciate it!

I made a recipe of hamburger and hot dog buns. It turned out OK but the technique is something I will not repeat......try mixing butter and egg into a finished dough.....not recommended. Also they are tougher than normal which isn't a good thing for my husband. The basis was a true French bread recipe which is probably the reason. I did find they are quite nice toasted (my breakfast with homemade apple butter) and didn't seem tough to me anyway. Note:  by the second day, the buns were just fine....very strange. 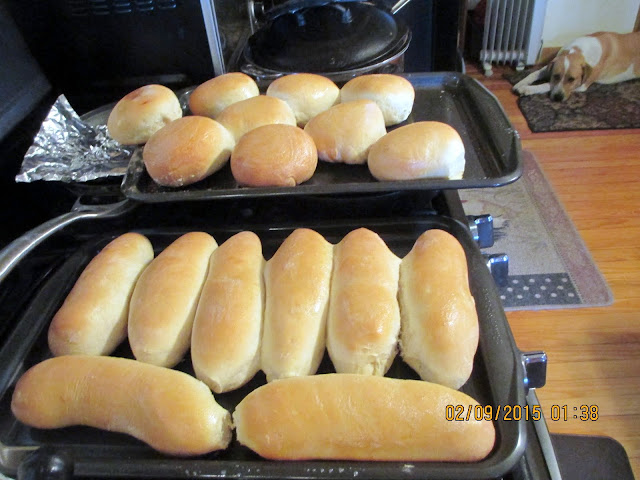 I made hot  dogs  with homemade fries for lunch. 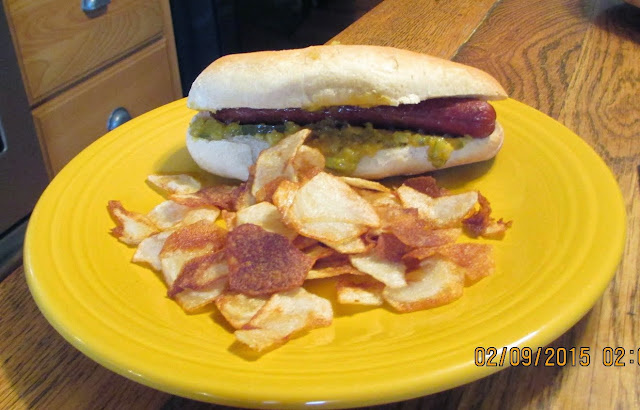 I had to make an emergency relish so I finely diced onions,sweet pickles and celery and added some mustard and ketchup....worked  out fine.
to be continued.
Posted by gld at 7:00 AM