Lots of Things Going On on the Farm

Well, first, let's get the weather out of the way:  It is still raining every couple of days so no hay down yet.  I have windows open this morning to enjoy the cool 64° but will soon have to close them and enjoy the AC.  It will be very humid after the 3/4 inch rain we got late yesterday afternoon.

We have had a hectic couple of weeks and for us it is a culture shock.  We are so used to the quiet house with just the two of us.....cooking only when we want and sitting down when we want.  First we had the 6 young people as guests which definitely meant cooking (a lot) and very little sitting.  The last left last Friday.

That was a very busy day.  The carpenter came in the afternoon to work on the porch so he was here.  Then the AC had been acting up and the serviceman came.  In the meanwhile our KC granddaughter texted that she and her Dad would stop by from Oklahoma City for a short visit.  She had been playing softball in a tournament.  Max was out brush hogging  and he doesn't hear the cell phone with the tractor running......Now I have the AC man,  the carpenter, and SIL and GD here.  Finally Max comes in and is shocked to see them.  He had been talking  to the AC man even though he saw their car......said he thought they were sure paying them well these days and it didn't occur to him whose car it was.  They drive a Toyota SUV.   He  had probably even forgotten they were in Ok.

The next day the fencing boys came and he once again at the far back of the farm  cutting brush.  I didn't know the details of some of the fencing project so I got on the ATV  and drove back only to find he had a padlock on the blasted gate and hadn't given me a key!  He has corrected that little error now.  I finally got him and we got the boys lined out.  They replaced the fence behind the cellar and are redoing the chicken yard and part of the garden fence.  So far, they are doing a bang-up job and we are very pleased.  They are just out of high school so we were doubly impressed.  The head man came by and told us we could be safe in their hands....it seems he was right.

This is the new west entrance to the garden: 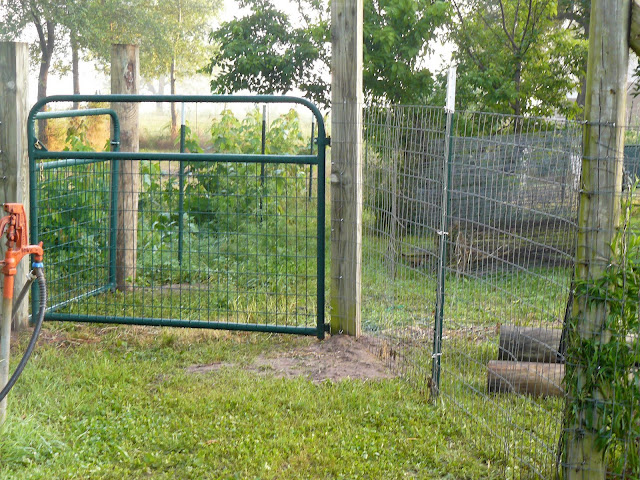 This is standing inside  the garden; the left gate is into the yard and the right is into the new (when finished) chicken yard. 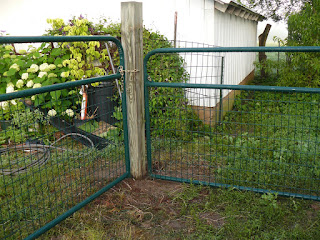 The garden has never had a back or northern fence and often animals would come in this way.  Now we will have a new fence  so the garden will be entirely animal proof (except of course for the normal farm varmints that climb) 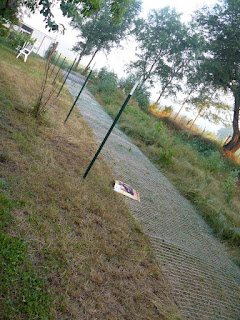 This will start at the shop building and run west to meet the chicken yard fence.

They think they will finish this job by Monday.  Max has several repair fencing jobs for them.  We think they will be available for at least a week while their boss is out of town.

Now the other project of the screened in porch:  It drives me crazy; he is doing a fine job but works only half days every other day.  I swear I don't see the sense in working this way.  Why not just tell each party when they can start and finish the job in hand.  Instead they are working three jobs concurrently!

This is the new vinyl flooring over very wavy concrete:

The framing was started yesterday before the rains drove him away. 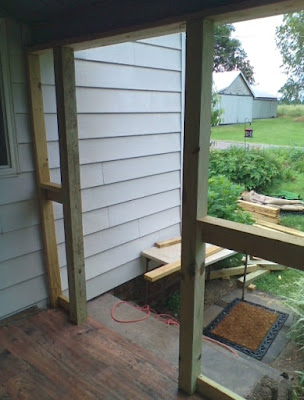 Of course now he won't be back until Monday afternoon.

A few more poppies have opened, a lavender and an orangey red one: 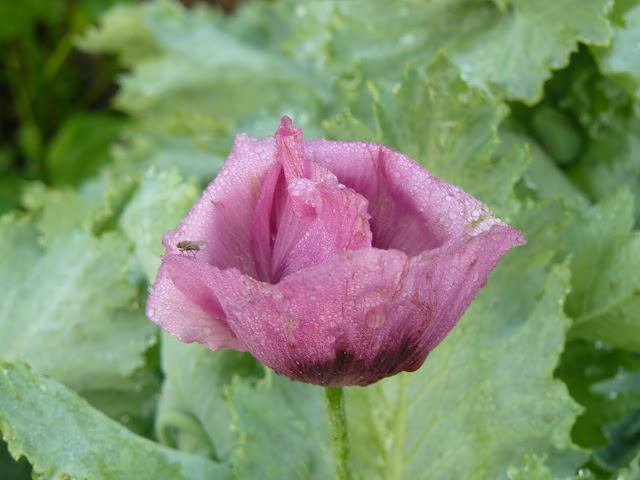 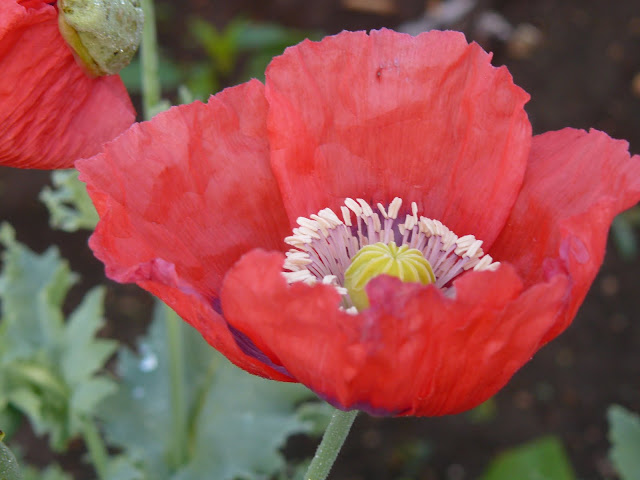 I have three loaves of bread going so all for now....