I blinked and January was gone!

February has started out  very busy.  We are hoping that lets up now.

First we finally got the roof repaired.  The estimate was January 7.......after three phone  calls we finally got it done yesterday.
I am always amazed how they will  tell you anything to get the job....started out being l and half week behind to ended up being almost 4  weeks.  But the end result is what counts and they even found another place that was sunk in over the screen porch that was missed and added it (more $$$ of course but very reasonable) and did it.  It was pitch dark  when they  finished cleaning up.

This is the area above  the bathroom that was completely re-roofed.  You can't see it but I liked seeing the cows in the far background.  Don't know  what the bucket is doing in front of the AC....we aren't the neatest farmers in the area....... 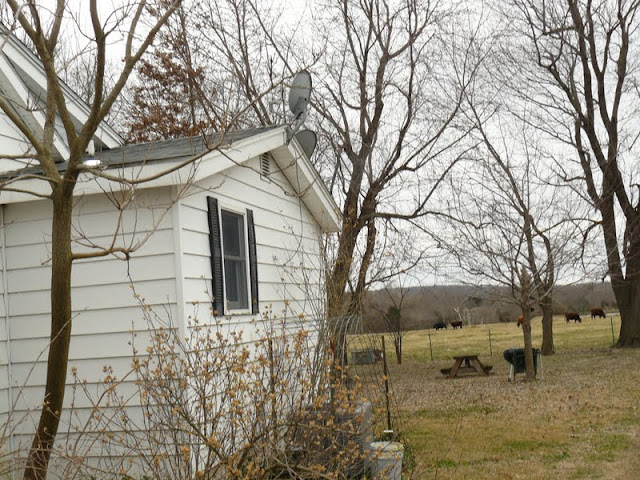 I won't sing their praises too loudly until we get another very heavy rain........

I went to the eye center in Willard......new glasses were in order.  Should be here in 7-10 days.  Not much change but it made a big difference in reading to me!  Cataracts are still not operation worthy!   Was told my eyes are healthy and to come back in  a year.  They did not accept the new insurance but we have never had insurance for eyes before.  The only doctor who is covered it a very long way from here and the coverage isn't that great so I will choose to stay 15 minutes from the Willard doctor.  I could actually read all 5 lines on the chart.....will be corrected up to 20/20.  So that was very good news.

Dermatologist visited and we are good for another year.  I do plan to go annually.  Max is outside daily and he had l0 spots to be removed, non-cancerous.  I had a basal cell carcinoma removed. He assured me he got it all  and it is the non-threatening type.  So, all-in-all a good visit.  He is retiring early as did my rheumatologist.  Because of "politics, insurance, and Obama healthcare"  I am quoting.  He lost his partner 3 months ago.  This is what is happening to our health-care system.  Older doctors who can afford to are retiring early because things are so changed and they are so unhappy with the new things.  Sad times.

I have been after (constantly reminding) Max that Jewel (the Jersey) should have her calf weaned because she calved in April last year.  Cows should have a 2-month rest period.   He failed to obey me  and came in a couple of days ago and said she had weaned her calf and was bagged up (for novices to farm  life this means her udder is enlarging with colostrum and milk for a new baby)  He predicted she will calve sometime this week.  We will still have to remove her large heifer calf but we need to find a place away from young bulls.  She shouldn't be bred until she is at least 15 months old.

Chickens are keeping us in plenty of eggs.  I need to bake an angle food cake to use up a dozen.

The beef cows are grazing on dried grasses but still go to the hay we keep out daily.

My kitchen window above the sink was so dirty from the birds hitting the window coming in to the feeder that we could hardly see out.  The last nice  day we washed it and then moved the feeder to the shepherd's hook in the flower bed.

Of course I miss seeing them while sitting in my easy chair but having a clean window may win out!

I took this shot through the said clean window:

That is the shepherd's hook on the left hand side. 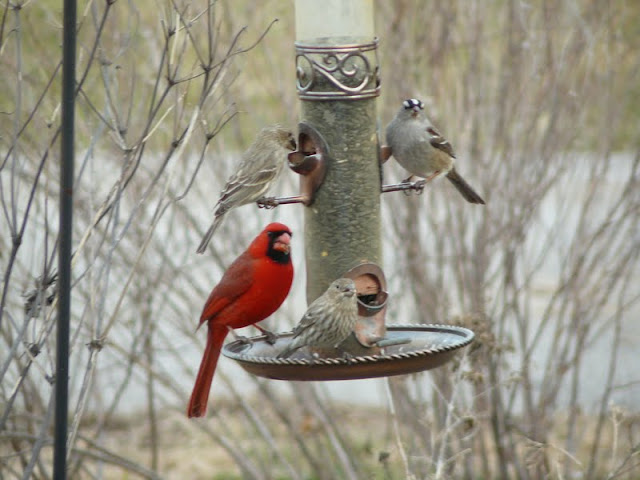 I think the nandina bush berries are beginning  to darken. 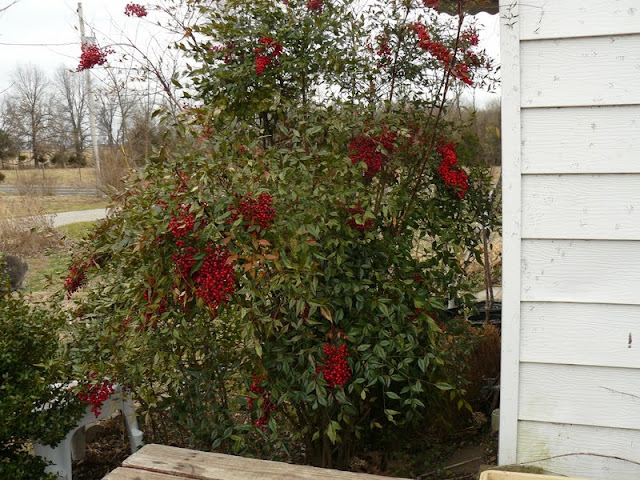