First Jewel Milking and last Cold Weekend for a While

It is very cold this morning and will be  tomorrow before our warm week begins....up to 70°  by next Friday.  I hope to dormant oil spray things during this  time.

I haven't been outside much this past week because of the cold  weather.  So pictures are few and the quality is not good.

My last walk was east of the house and I only took this picture of a remaining pool of water still standing in a low spot at a gate. 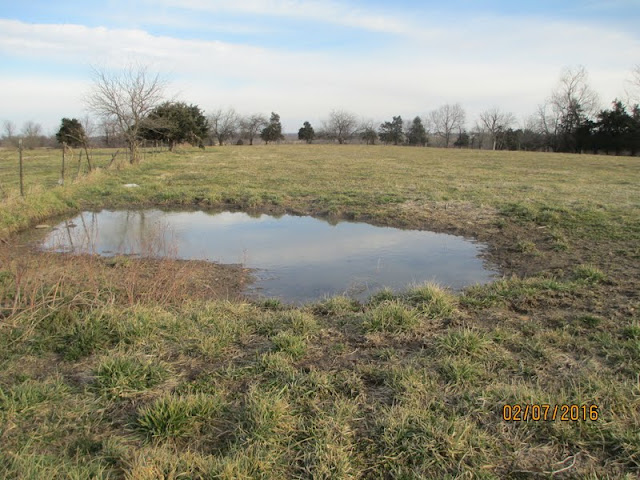 This is in part of what we call the East 20.  No cows here because it is a hay field and all cattle come off in January until hay is cut.

No other farm related news.  Just DH's daily checking and feeding. I did have him  move  all the hay feeders and the mineral feeder to a central location  off of another hay field.  We are a bit slow on this this year.  He does the work but I do a management control (in the background and very low key).  We work together well that way.  He is not a detail man.

We have weaned Willow from house milking but her calf is still nursing.  He will be taken away in May.  If she does as expected she will calve again in July this year.  I am  going  to try to manage the bulls better this time.

We milked Jewel for the  first time on Thursday. Their milk is good for use on day 3 after calving.  We will leave her calf on her 24/7 for a while.  She will still have enough when we do milk for us.  In fact we plan (we being Max)to milk her every other day for a while so she won't dry somewhat or her udder won't get too uncomfortable for her.  The calf won't drink more  then he needs which is about l gallon a day.

We got 2 gallons the  first milking.  I skimmed l  full pint of  cream  from the gallon Max brought to the house.  The milk is delicious but not too buttery tasting this way.

I apologize for the quality of the picture but here it is: 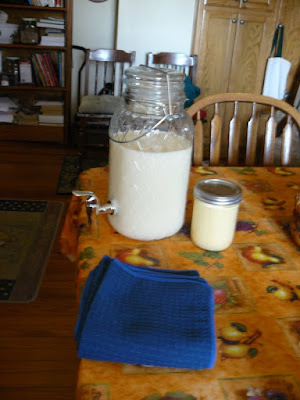 This brings on another Sis story.  My sister lives in Iowa and  is two years older.  This has happened to us before.....doing the same thing or cooking the same  thing at nearly the same time.

When talking yesterday I mentioned that I had just ordered something that she would probably make fun of, dishcloths.
We were raised in a household where they were called dishrags and that is exactly what they were.  discarded old shirts cut to size.  She laughed and said she had been looking at them the day before.  She was gifted one that had the scrubbing back side and loved it so much she wondered if she could find any online.  I  told her if it was available Amazon would have it.....and they did. She ordered some that same day.

I told her  it was maybe  because we each spent so much time in the kitchen and loving to cook that our minds would naturally be interested in those kinds of things.  Her love  is cooking in general and mine leans more toward baking.


I feel I need to explain why Max now does the milking which used to be my chore exclusively.  When I had my first bout (and do mean bout) of polymyalgia rheumatica, it was in  my arms and especially hands.   I couldn't hold a pencil much less squeeze a cow's teats.  That is when we bought a portable electric milking machine.  Max was very familiar with that use from our dairy operation.  He did so well, he just kept on.  Another reason is that ornery Willow who doesn't like me at all,  likes him very much and just trots up the ramp into the barn.  Whereas if  she spots me she heads for the west field at a trot and Max has to go get her.  I am quite content to let him continue.  I do go out and clean the parlor now and then.

This will be another lazy day for me. I cooked a large pot of white beans yesterday and we will enjoy leftovers today in some fashion. I also had fried potatoes with onions and corn bread.  Mom never served beans with out those sides and often macaroni and  tomatoes.  Don't really know why but I love the combo and so does DH.
Posted by gld at 7:48 AM