Much colder today at around 37° and very cloudy; slight chance of rain or snow.  We need rain.

Tuesday, at last because Monday was MIL's doctor appointment and the first time I went  with her and went into the exam room.  I doubt I will be  doing that  again.  Enough said.  I don't want you to think I am a mean person (but I am often!).

She got a good report with no more changes made in her medicines.

We (Max) has been milking Jewel every other day so we were getting a considerable accumulation of milk.  This morning I worked up 2 gallons.  First thing I did was skim most of the cream from all.  This gave me slightly over 1 quart of heavy cream. 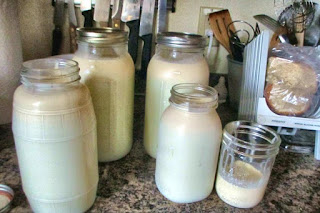 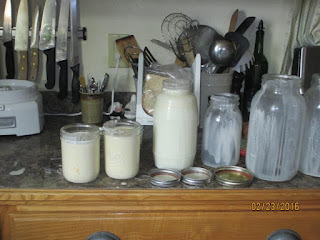 This left me with a full gallon for making mozzarella and a quart plus for buttermilk.  It is a messy process as you can see.

I made another 12 oz. of beautiful dark yellow butter which I will freeze.  I used the mixer this time and it is not nearly as quick as using the food processor.  I was afraid I would overload the processor but it would have been faster to just split the amount and made two batches.


The mozzarella is at the curds ripening stage and I will finish it off in the morning. 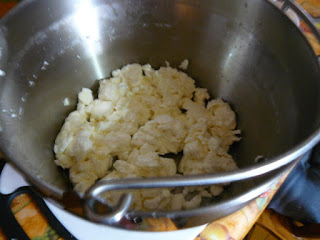 I combined the left over milk from the butter with the quart of whole milk and it is setting in the kitchen to curdle and ripen like grandma made clabber milk.  No additives of any kind.

Most of the mess is cleaned up and I am resting at the computer!

This is for Kris.

The texture of the Oatmeal bread.  Please note it is not the true recipe because of my using too much liquid and the 'sort of' correcting it.  It didn't hurt the flavor at all.  The whitish pieces are the bits of  steel cut oats I added plus the rolled  oats. 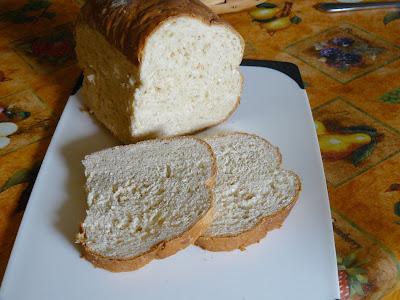 Note it is a little to holey in the center.  I think that is due to adding a little too much yeast on the correction.  I know that last rise was almost instantaneous and I had to be careful putting it into the oven so as not to deflate it.
Also I had to cut the loaf in half and then slice the halfs so it would fit a toaster and be easier for sandwiches.  This is actually half a slice.  See what I mean.....
Posted by gld at 11:21 AM