We are in the Milk Again

Jewel, the Jersey cow, calved once again and we will now be using her milk!  Here she is still in her ratty winter coat with new heifer baby; 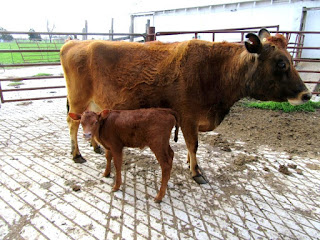 Max wasn't sure about her milk so he brought me a dripping pint to test (I was out weeding).  I took a drink and  told him  it was perfect.  He must have lost his sense of taste because he kept telling me it wasn't good yet.  I will let it rest overnight in the extra fridge and then skim off the cream and bottle the rest for drinking.

While out near the pens, I took a few more  cow pictures because several had  come  down the lane and were standing in the lot. 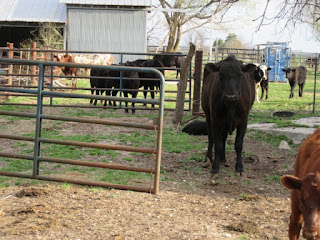 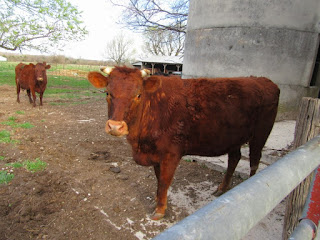 This is either Jewel or Willow's two year old heifer who will calve before too long.  I will have a small herd of milk cows (won't be milking them though).
We will have her dehorned soon. 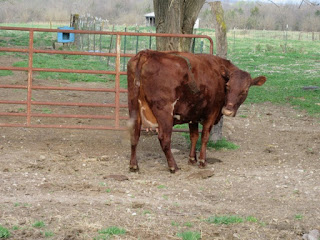 This is my usual view of Willow since she  heads for the back 40 when she sees me! 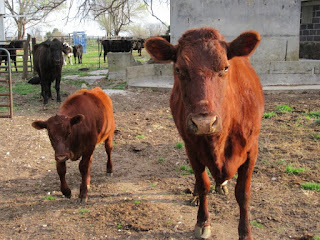 This Willow with her current offspring,  another heifer. 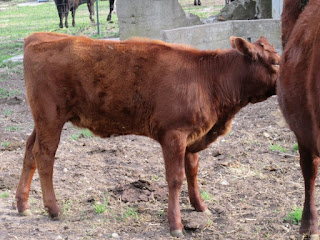 This is a better view of  Willow's  daughter.

We are promised some rain and storms for this evening so I tried to do some weeding in the flower beds before it hits (so far the storm  has just brought some showers).  This is what I fight all summer long, henbit. 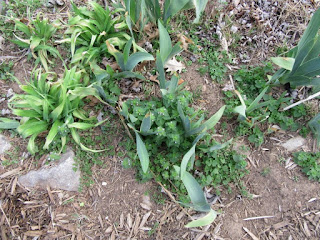 It is a slow job especially with the very dry soil.  Maybe we will get enough rains to help.

I gave in  to Max's pleading yesterday and  made a Long Island Cheese Squash pie.  I cheated and had some too. This is all that is left and it has his name on it.
The squash/pumpkin is very prolific and makes a very tasty pie. 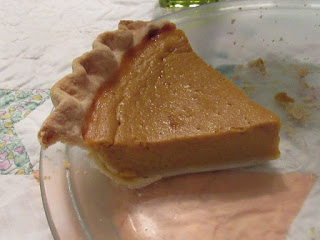 It is still raining lightly.....