Another Trip to Town

We were hoping we were through with running to town for errands or anything else.  We don't count our little trips to Willard which is about 5 miles.

But we received a call regarding Sylvia's estate that required Max's signature so off we went.  While we were waiting in the office, a small shower came up.  By the time we left it turned into a full-blown gale with winds and rain so heavy some were pulling off the streets because visibility was so poor.
We kept on trucking but had problems reading street names for our turns....We passed by a car wash that we later heard  lost their roof to a neighbor's house behind them.  Could have happened as we drove by since we were getting pummeled with leaves and twigs at the same time.  I even remember the street name as we drove by since I knew we were getting very close to our turn.

Good news though we got about an inch of rain at home and no damage that we have found so far.

This morning I am baking.....2 loaves of Oatmeal Sandwich Bread and a pan of cinnamon rolls.

Our daughter and family are coming down tomorrow to pick up their cats (yes!) that we have been babysitting for three weeks.  I always try to have her at least one loaf of their favorite bread ready.  I might even share the  sweet rolls.........

This is King Arthur's Toasting and Sandwich Bread.  I doubled the recipe. 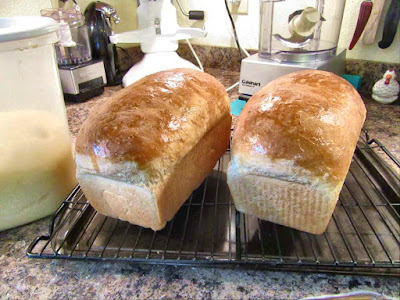 That is the sweet rolls rising in the container to the left.

This recipe is the one from Thibault's Table and originally from Joy of Cooking book.  I made them smaller this time. 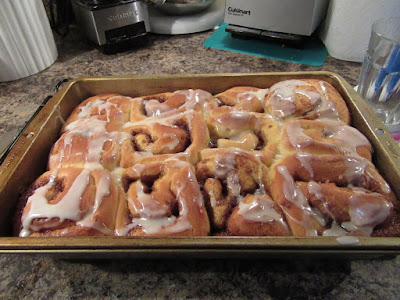 I have to fess up.  I have been using flour from an Amish store in Buffalo.  It is in bulk and so much cheaper I am shocked.  They don't carry bread flour, but I have been using l cup of the high gluten flour in the recipes  and their Pollyanna Flour (an unbleached white flour)and all else the same.  I am very happy with the results.  I still believe firmly in King Arthur's flours and will try them again to do a test.
Posted by gld at 3:31 PM