January 8,2013
I have been doing very little with this cold, but push had come to shove; I had to do some shopping.  I was completely out of AP flour and very low on some other staples like beans.  We  also had to return a past due book.....DH's fault,one of his. I made him stay in the truck since his cold is still so bad.  I picked him out just one more book.

I picked up a bottle of multi-vitamins...and, believe it or not, DH actually agreed to taking them.  I may have to rethink the flu shots.  I don't think he has the flu  though, just a cold.

It was very bright and sunshiny but windy and cold in the 40's.  They are predicating rain overnight but saying it will  hit south of I-44.  We are north of that....still keeping our fingers crossed.

You can see the Cardinals feathers being blown about, 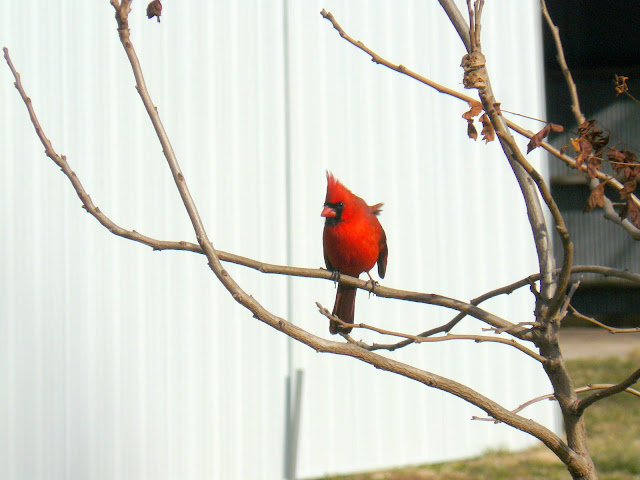 I am getting worried about letting Sugar out to run free for a short time.  Twice now she has headed for the road out  front and she doesn't stop or come to me when I call her.  The great outdoors is so much more fun!
I have discovered that our  old  dog pen which is about 15 x 30 holds her.  So now I can leave her outside in the fresh air as long as she wants.  She was worried  when I walked off but when I went back to get her she ran to the back corner of the pen.....she didn't want out. We left her for about an hour.

DH was planning to get calves up to sell but I told him to wait until he is feeling better; there is no urgency and I know he  doesn't really feel up to  it.

Late in the day I cooked  a large pot of pinto beans....we had a dish for our evening meal and will have  it for the rest of the week.  They were the palest beans I have ever cooked....very strange.

Something else I noticed....normally when we hit Wal Mart after a long absence,the bill  will be around $100; this time is was over $200.  There were no major items on there either.  Shocking.

I made homemade donuts day before yesterday. 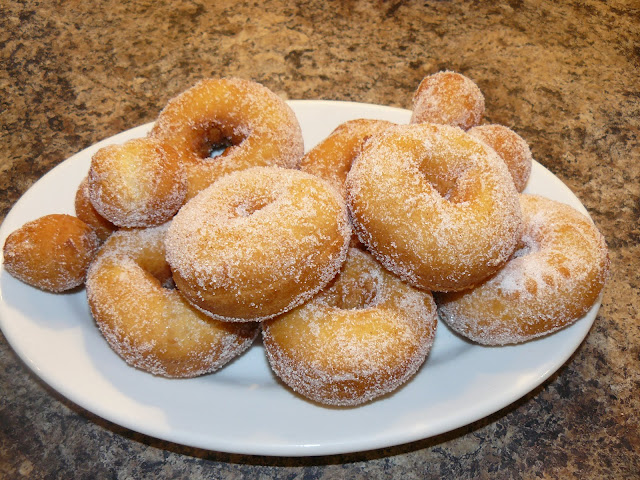 I bought a very small deep fat fryer and have used it a  couple of times.  It makes  a big difference in how the end products turns out.  No matter how carefully I monitored the thermometer using a pan of oil on the stove, it would always get too hot and then too cold.

The other thing I got accomplished is I ordered the majority of garden seeds from a company I haven't used before, Swallowtail, but some friends have .  Time will tell how pleased I am.  I forgot to get vinca seeds so I will be looking for them soon.  They are a favorite and very easy from seed.
This is the year I am purging all the seed inventory and starting fresh.
Posted by gld at 4:39 AM