Fresh cup of coffee at the computer, breakfast over, and I will blog.  That used to be my routine and it worked for a long time.

I still have some aches and pains but have decided that it is something I  will just have to adjust to.  I had a little conflict with my doctor and it left me feeling less than happy with him.  He called me hyper!  I know I am Type A but I am certainly not hyper. He did not make a life-long friend or happy patient.  I will now just tolerate him.....and may be forced to ask for another doctor if and when I need one.

We have had some excitement on the farm since last we visited.  We had the fencing man back to cut up a downed tree and remove some downed limbs.  I had done several but we thought since he was at the neighbors we would take advantage.

I was sitting at my desk and saw his truck running across the front yard at a pretty good speed and he was chasing it (a loosing battle); truck crossed the drive and headed to the east fence by the cellar.  He fell right beside the truck and it grazed him.  I thought it was going to run over his body.  It happened so fast.  My new east fence stopped  the truck. It took out my purple smoke tree and broke a wire on the new east fence.  The sad thing is, the truck is a 1972 junker; he had to lift the hood to start it and it jumped out of gear and took off.  I guess the accelerator stuck.  He even tried to climb in the window because the door had slammed to and  locked!  I am guessing no insurance of any kind. I am so relieved he wasn't injured.  He has already repaired the fence, the smoke tree is cut way down, hopefully to  return.

And now more pleasant things,  my rose cutting of the Aloha is blooming.  My sis took several from my bush before it succumbed to Rose Rosette Disease and they took.  She sent me three last year and two have thrived. 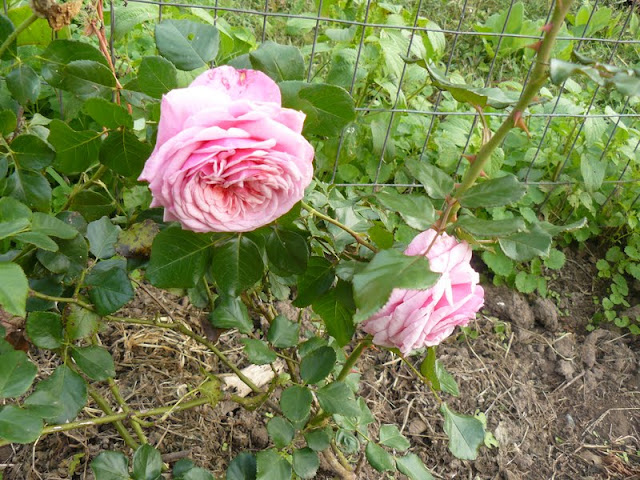 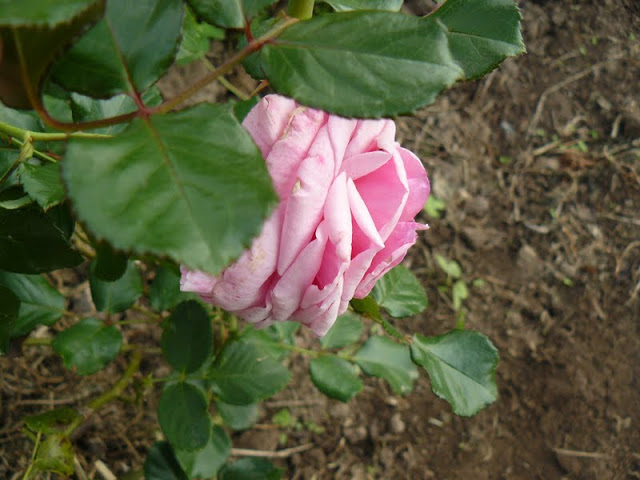 I see this rose is now  available  commercially.  I can't praise it enough.  Very fragrant, glossy leaves and a lovely two tone pin.  It is very doubled: 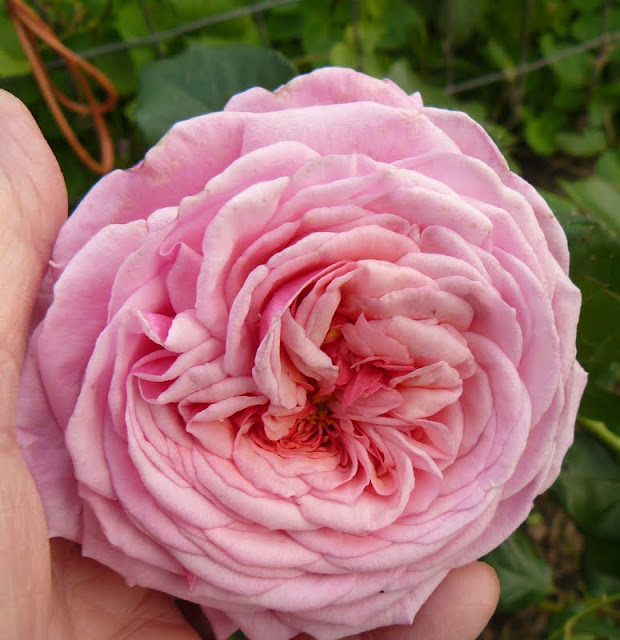 I planted them on the garden fence next  to the white clematis.

Speaking of clematis, all of mine have re-bloomed a little this fall.

This is the back side of Harlow Carr on the garden fence: