The following is just a diary of my days....feel free  to  skip.  I do like having a record for me so I may continue this format.

Next: Go through all insurance new files and see if anything needs doing
Already received membership cards.  This was a task I hated but did.

Fencing man finished up south east property line perimeter. Three new wires and three new posts. He now has a permanent (maybe) job laying bricks (or hod carrier) at Nixa.  So we appreciated the work he did for us and maybe he can do some odd now and then things in the future.

Kenny, Lezlie and Kolton brought tiller back (after I called) These are our ex-neighbors who bought our old place but have since bought a bigger farm and moved several miles away.  They still keep cattle across the road on their cousin's acreage.

I made pasta and french bread.  I splurged a little  at Amazon Black Friday Week sale on their  double french bread pans.  Always wondered if they would be better than a cookie sheet.  They are not. They were relatively inexpensive so I don't mind too much.  I will use them. I am such a sucker for kitchen and cooking things.

Up at 3 AM
Read for a while and made coffee, unloaded dishwasher.
Breakfast, sausage gravy, biscuits using diy baking powder (2 cr of tartar, l of soda and l of cornstarch) works beautifully with buttermilk. And scrambled eggs.

Clean zinnia and cosmos bed by drive. In middle plant the lilac. Plant three spirea out front by road. I got the bed cleaned and planted the lilac. Also found three more pumpkins. Spirea still waiting.....

I have had a lot of little (and not so little) things pending.....things DH does not do!

First, we have/had a problem when we enclosed the porch because I now keep the screen door latched so people can't peer in my kitchen window from the porch.....this entrance is used by one and all as our main entrance. Our neighbor has been walking around the house to the actual front door which is a nuisance for him and quite a distance through sometimes tall lawn grass.

I discovered a thing called wireless door bells. Who knew! Not me for sure. I bought one and it was a simple plug in receiver and tape push button to door frame and voila! A door bell for the new porch. 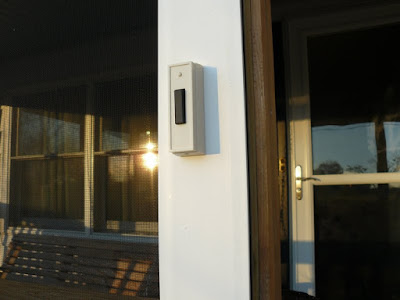 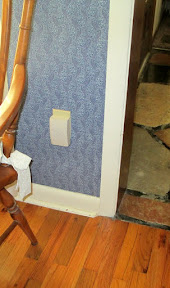 The next project also involved the screened  porch. A few months ago the motion detector light blew up. I have been dreading replacing it and it was the simplest thing. The new fixture almost fit the old base.
I just had to drill one hole. The thing holding me off starting was I didn't know which fuse it was on and this old house is a real patch up wiring job. I bought a tester and when I turned off the light switch it was dead and I proceeded safely. 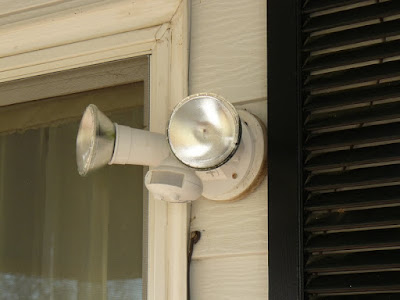 I even traipsed out there this morning at 5AM to see if it was angled correctly for a person on the ground level. It was.


I forgot the project I started with. It was my favorite because I will enjoy it daily in the kitchen.
Gail prompted this one when she posted about the Minn wax stain/varnish gel. That got me interested.
I wanted the chairs to retain their old, beat up look. They had been sanded a long while ago so I just had to clean them up and go. Unfortunately our local Ace Hardware only had quarts of mahogany and cherry gel so I chose the non-gel form in a walnut. I will have Max steel rub the backs and seats to smooth up the finish more. The cushions are new. I now have two extra chairs that I needed and had been looking online.....I saved over $200! These are from our first breakfast set so are probably at least 50 plus years old. I hope the don't collapse. I did glue some of the joints first. 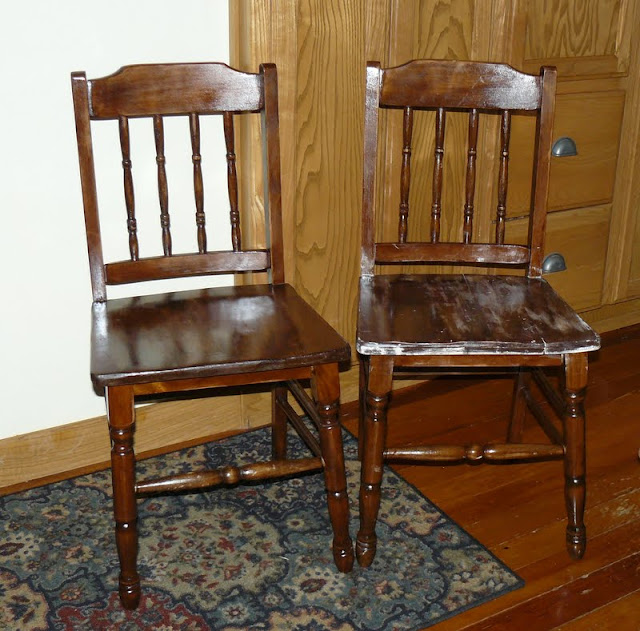 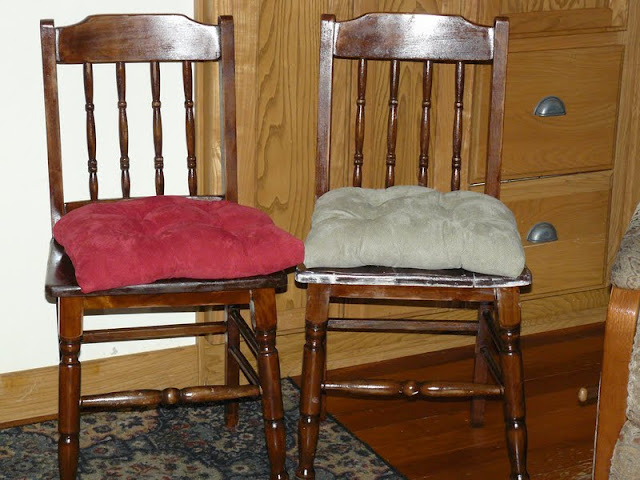 These all went pretty smoothly and then I met my Waterloo! I bought a replacement blind for the back door in the living room thinking I had exactly the same thing that was in place and all I would have to do was hang new one. Wrong! I bought the 2 inch slats and nothing fit the same. It took two days because I had to recharge the drill, dig out the electric drill and pound some starter holes. It is finally up. I still need to remove the excess slats.....that will be for another day. 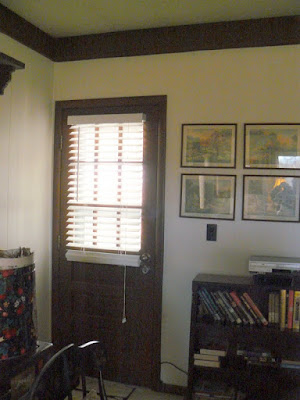 While working back in that dark corner, I could see all the cobwebs and dirt down on the marble flooring. It was a real eyeopener. I mixed up a gallon of hot water and soap and got down on my poor sore knees and somehow managed to turn the bucket over and flooded the marble. So now it is really clean. Thankfully I was kneeling on a huge bath towel (for said knees) and was able to stop the floating downstream under the wood stove (I hope. )

I even tidied up all the various screws and tools and Max took them back to their proper place.

Here is the next indoor project I bought the spray paint for several years ago. I have hated the brassy look of this since I bought it 24 years ago. I plan to remove all glass and bulbs, take the fixture down and spray paint it a nice creamy color. 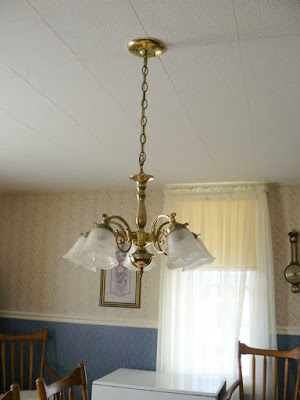