Hope you can follow this strange format.  I wrote on several different days...I am trying to keep it in order.....

We are enjoying beautiful fall weather. We have had some nice showers but nothing heavy. The cows are loving it too.

I have taken some time off from the painting project. The bottom freezer was calling out to me loud and long.....when the door doesn't slide out easily or close tightly, it is time to do something.
That was yesterday morning. I have made a solemn vow to never load it over half full and to keep one section exclusively for frozen breads...(we will see how long that lasts!)

I did this while letting French bread raise twice and then baking....all went well.
If I get ambitious I want to do the upright freezer on the porch. I hate these jobs.

Chickens are still laying but not as heavily. One chicken is trying to set again, bless her heart. When we had a rooster I would have been delighted. They are so stubborn about this.

Still haven't done the upright freezer but did clean the refrigerator.

We got 2 inches of rain a couple of days ago and more this morning. It is supposed to warm up beginning tomorrow, just in the 80's which will be nice.

We have had the furnace on a couple of days but just for a little while to warm up the house and then off again.

P.S.  I did do the upright freezer. Hallelujah!

Lots of news for us:

Most important is Max had a small heart attack last Tuesday. Rushed in ambulance to hospital. He now has three new stents to go with his two old ones. Good news is doctor said his heart muscle appears normal so no serious damage from his old heart attack in 2004 and this new one. He is back home on the routine heart meds and is feeling very good. We are out to do chores later this morning.
He is to take it easy for a few days so I am going for two reasons. I can drive (maybe) and open all gates (definitely). The other reason is I found while he was just gone overnight, I had forgotten some of the routine. I may go with him indefinitely (if he will allow) or at least often enough I am back in the groove. It will be good for me.

Now for the ordinary Life on the Farm stuff:  The mum project was before HA (heart attack,as our life will now be lived)

I bought some mums for the yard. I did a small planting on the top of the front ditch of two mums and two asters. These are between the very small Van Houttei spireas already out there. Plans are to fill in the lower level next to the road with natives and grasses and stop the trimming or spraying issue. I have lots of things I can use: Daylilies, grasses, sedums, salvias, and I will toss some seeds. This will become a wild bed. Still better than fighting Johnson grass and foxtail all year. I still have some oenothera left and can move some of it back to the ditch. It spreads like wildfire.

Can you see upper left the pink onenothera?  This is in the bottom of the ditch.  There are several smaller plants along here.  The seeds pop open and can shoot them a great distance.  I have them way down the road towards the neighbors.

The other mums were in front of the dining room foundation bed: 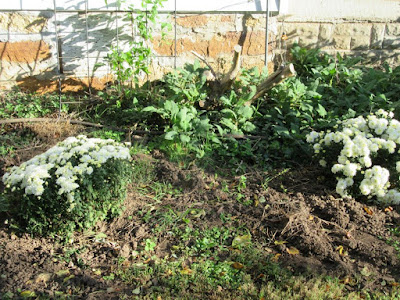 That is a blue salvia transylvanica center background and a Blue Angle clematis on the wire trellis.  It had lost all leaves due to clematis wilt and  I cut it down to 18 inches and was delighted to see it came back and has one lovely bloom.  It shows more lavender here but is really a very pale blue. 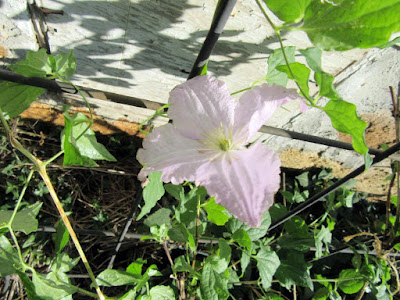 It is about 36 inches tall now.  May get a couple more blooms if the sporadic frosts don't kill them.

Speaking of:  Frost on the Pumpkin!

This is our second scattered frost.

The day Max got  sick, I had been out cutting the perilla and pulling out the Long  Island Cheese pumpkin vines.  They were beginning to die and looked dreadful.
So I cut of most of the pumpkins too. 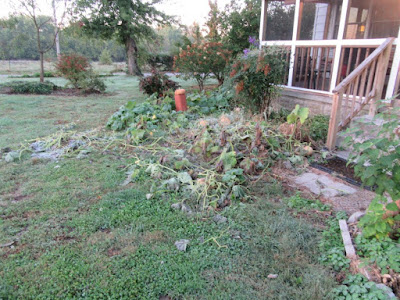 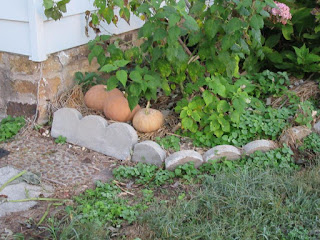 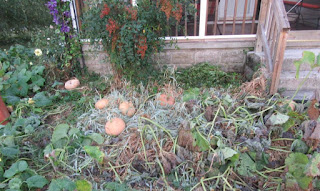 These leaves below were very crunchy with frost. 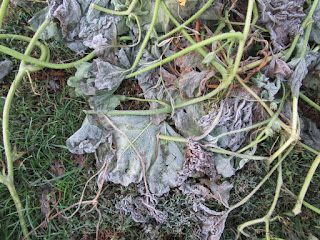 OK, I give up on putting these pictures side by side!

I have lots more pictures, but this is enough for now.

Crock Pot Roast is cooked and ready for dinner/lunch.
Posted by gld at 8:53 AM