Today is a perfectly beautiful fall day, 71°with full sun


The big news on the farm is I now have a new baby to put on Willow!  It is a darling half Jersey; half Holstein bull calf.

Our  neighbor that bought  our old farm that adjoins ours (the one who saw the mountain lion) called and told me about this calf.  Her  son brought it over yesterday evening.  I don't think this baby was ever allowed to nurse its mother because it had no idea that Willow was a source for good food.  He had been fed last night before delivery so we didn't get that fun experience until this morning.  We tied up Willow and  then chased the baby around and around until I could get a halter on him and urge him up under Willow.....once I squeezed that  teat and got it into his mouth he was on his own.  She didn't seem to mind as much this time even though her calf was still locked in the barn and she couldn't see him.  I think maybe his color which is nearer  her own might have helped....maybe cows are color blind.....maybe she is mellowing in her old age.......who knows.  I let the calf nurse for a while even though I could  see Willow hadn't let down her milk.  He was getting something because his little tail was hiked out behind and he was wagging it to beat the gun, always a good sign. When I turned out her calf, she immediately let down and the two rear quarter filled nicely.  Accidentally the new calf  got between her legs and nursed from the rear  which put him right at the best source of milk.  A cow's rear  quarters are always the  heaviest milkers.

I always wear  my gardening apron to protect my front from 'farm soil', but still I had to come in and launder my jeans.....a  splatter occurred.

Here the baby has latched on and I am just keeping him in the right place.

Since I knew they were coming with the calf late in the day and I was needing to bake bread, I decided to make my favorite sweet rolls for them and to do a new recipe for potato bread that makes three loaves.  It is a keeper of a recipe.  I let Josh (the neighbor's son who brought the calf) decide if he wanted the rolls or bread.....he picked bread!  I sent the rolls home  with him anyway.
I did save back two for us. 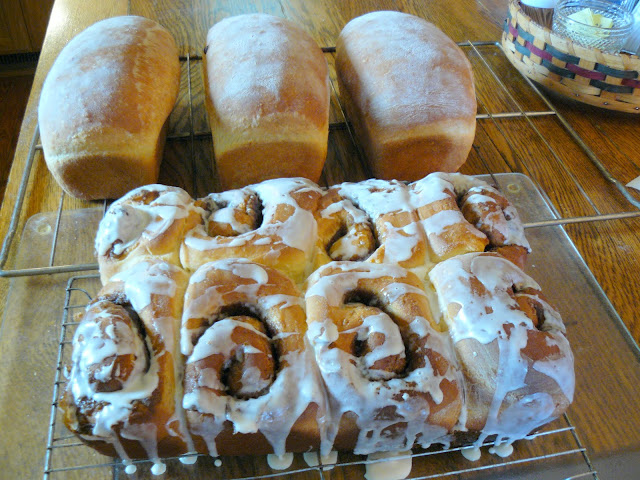