It was 34° but no frost that I could see out the window.  Very cloudy but no wind.

I finished 16 pints plus one for the fridge yesterday.  I used the Victorio strainer for the first time and was very happy with it.  I used the wrong  cone because I couldn't find the correct one so I have some tiny bits of  seeds and hulls that I don't like but I can Foley Food Mill it out for guests.  Then when I am ready the box to store things, out of the depths falls the correct cone!  Drat, drat. 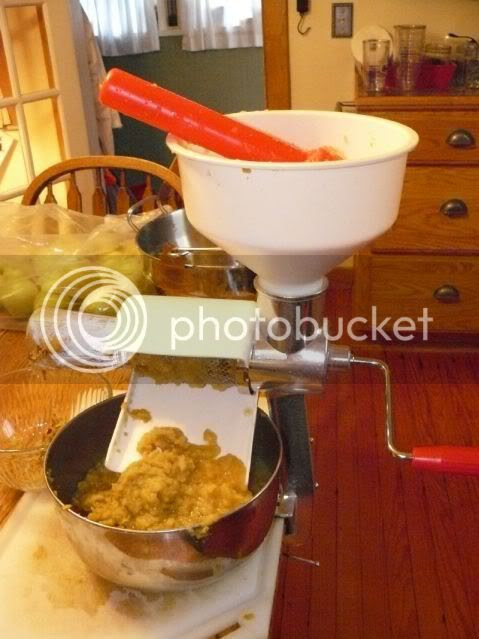 I have a tray of the last apples we  bought.  I think I will just freeze them.

Well, I was wrong about  no frost yesterday morning......I went outside around 4 pm and saw that the sweet potatoes were totally blackened.   I corralled  DH into helping me and cut off the tops and dug them.  There were only strings in the first 4 hills and then, paydirt!  I don't like the huge sizes but I had no control over that. I think this was just 3 or 4 hills.  I only planted 10 and lost some. 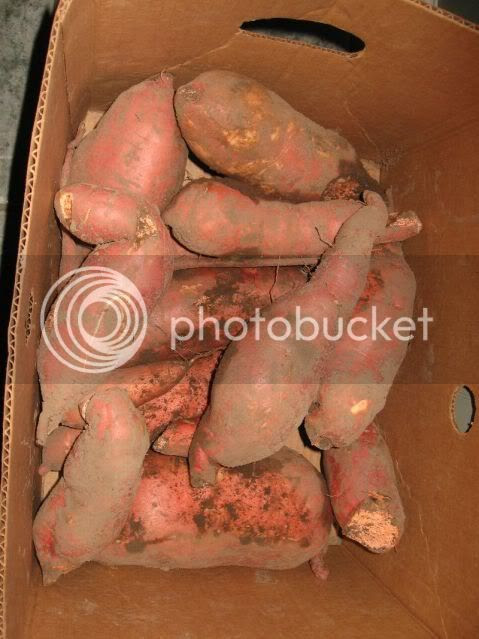 Since  I didn't  cut the tops off that morning  as soon as the sun came up, they may not last.  That is what Dad always said.  We will soon know.

The Early Girl tomato had been completely covered by the sweet potato vines and was hanging full of green tomatoes....we just picked a few.  My poor little hot  pepper had just finally begun to grow and was hanging full of small very hot peppers.  I picked a few and then just pulled the entire plant and hung it  in the smoke house.  I found just a few of sweet peppers.....they were covered with the sweet potato vines too. 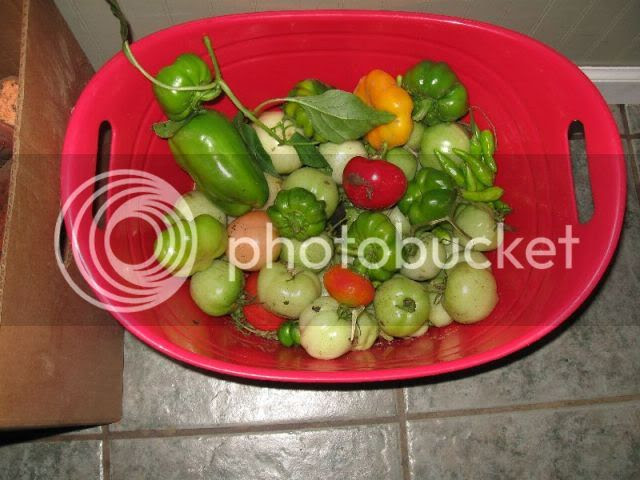 We definitely had a freeze last night.  About the middle of the week, I will mow the entire east garden down.  I am ready for it all to be gone.

Note to Self:  Next year plant sweet potatoes in the new orchard garden and leave space on either side so I can just mow down  when the vines get out of control.

This is Sunday dinner with my MIL as guest.  I have a Pikes Peak roast in the crock pot with a package of onion soup mix.  I just took a banana cake out of oven (to be frosted with cream cheese frosting).  I will be fixing potatoes and the 'gourmet' green beans with toasted almonds later.  I am also making  a batch of the Best Ever Potato Rolls from Granny Mountain.  DH is still  commenting on the bread from the recipe.  He says it is the softest bread ever which is what he really likes for sandwiches.  It toasts beautifully too.
Posted by gld at 8:16 AM