We  got another 1/2 inch of rain yesterday morning.The ground is now wet enough that brush hogging is impossible.  An old farmer once told me that when you walk on the ground and you leave a l inch depression in the soil, it is too wet for machinery.  I try to keep that in mind.

We are in the process of getting up calves  to wean and sell.  DH had already cut out several but I saw a few  more in the field that I thought were big enough.  We really should buy a scale to weigh them  but probably won't at this stage. There are no horses or atv's involved in this roundup.  We open the back barn lot and let the herd wander in....close the gate and then cut out  the various 'victims'; run them into another lot and then turn the herd back out again.  I think we added 6 more.  I decided they needed to be fly treated so we got them into the working pen and down the alley and I used a permectrin pour-on along the top of their shoulder and poll so it could drip down their faces. Flies are really bad this year.

Every time we work the cattle, we are thankful all over again for the circular pen  with the sweep gate, alley and squeeze chute.  It makes it so much easier for the cows and us (particularly us!)

DH made arrangements for a neighbor to deliver and spread two large dump truck loads of river gravel in a couple of deep spots in the holding area and where he backs up to the alley to load calves.  I don't know if that will be enough or not, but it's a start.  I haven't seen it yet.

I need to do some serious trim mowing back there but....too wet now.  I do see an opportunity ahead. Next week is supposed to be dry and mild,  70's and 50's.

By the time we finished that, I was wringing wet with sweat and my hair looked like I had just left the shower. Humidity is very high.

I milked Willow after the calf nursed and got my 3 half-gallons. I won't milk again for 4 days unless her udder looks too big.

Dinner/lunch was  a Kansas City strip steak that  I split lengthwise.   It was  too thick for my taste and speed in cooking.  Sides were cole slaw and the half runner beans and a baked potato. Dessert was a slice of pumpkin bread I took out of the freezer.  I made it with my canned pumpkin and added English Walnuts this time.

Very late in the day I made bagels.  I have been out a long time and really do prefer the home-made version to store or bakery bought.  It is a three step process but pretty easy. 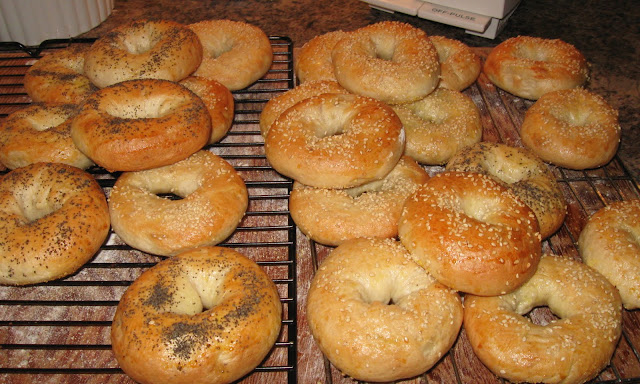 I had one for breakfast spread with cream cheese.  DH does not do bagels......

I don't think I have mentioned it before but one  of nice things DH does for me is he sets up the coffee in evenings and when I get up in the wee hours of morning all I have  to do is pour the water in and turn it on.  I rarely make the coffee. The first thing he does when he gets up, even before coffee, is unload the dishwasher  for me.  Retirement has made him much more helpful in the house which is a very good thing.

I am still using the recipe from Thibault's Table.  I have at least two more of her recipes  that have become regulars in my kitchen, cream cheese Danish and  sweet rolls.
Posted by gld at 4:34 AM