I have been keeping a daily journal on Open Office thinking I would quit blogging but now may just transfer it.....with some editing.  I will see how that works.  I know gardening is going to keep me busy soon but I would miss sharing with you all pictures of farm life.

It rained most of the day, a light steady rain.

I made a banana cake and read most of the day.

It has rained all night and all day with  over 2 inches so far. It is still very dark and cloudy at 7 AM this morning.

We moved the plant stand off the back porch to the dining room.  It makes it so much easier to take care of the plants with the dog on the porch.  It doesn't enhance the dining room but I am not concerned.  It will only be until the end of May and then everything should be planted outside.

Planted oregano, rosemary, thyme outside the back porch door.  I think having them so close  will remind me to actually cook with them!

Weeded the Grace bed; about half of the Cellar Bed. The Grace Bed is just south of the cellar where 'Grace' smoke tree is planted. One of the two crape myrtles survived.  I think the other is dead.

Began to kill the wild honeysuckle that has taken over my red honeysuckle I may have to kill out both of them.  I traced the wilding to a huge root stem and just severed it. Of course, now I have wilted stems twining among my red honeysuckle which has buds on it.  I like the wild one because it is fragrant and the red isn't.  But the wild one had climbed over the top of the nandina and almost covered it so I pulled it all out.
This will  be a continuing struggle trying to kill one and save the other.

We will have to rake up debris before mowing again.

Took time off to cut out and load 5 calves and took them to the sale barn in the afternoon.

I raked up a huge pile of weeds and then we mowed everything again.  We were trying to beat the rain predicted and we did.

Picked up our check from the sale barn early....I think taking them in the evening before makes them sell much earlier on sale day.

We splurged and traded in our 2005 Silverado for a 2013 version (which means this is the year of the truck and not the year of the remodeled bathroom!).  I agreed to it though.
We picked up the truck around 5 pm. I was disappointed it didn't have running boards so Max will go back tomorrow and have them installed.

Max and Sylvia (MIL) went back to Marshfield. She needed some small things done to her new car and we needed to have the running boards installed.  I failed to mention she traded in her  car for another 'program' car.  I told DH when he took her down to take a 'look' at the new trucks......he  did!

They were gone all day.

I cooked a pot of beans; did some housecleaning and read. They got back around 3 pm. Max did evening chores. We had creamed asparagus and a poached egg on toast for supper. It was our first asparagus of the year.

I pulled the straw back over the strawberries. Everything else is on it own.

We got down to 30° and have about l inch of snow. Maybe it will act as insulation on some things.

We have one more night of freezing and then a slow warm-up. I won't know for a few days if the fruit was affected. 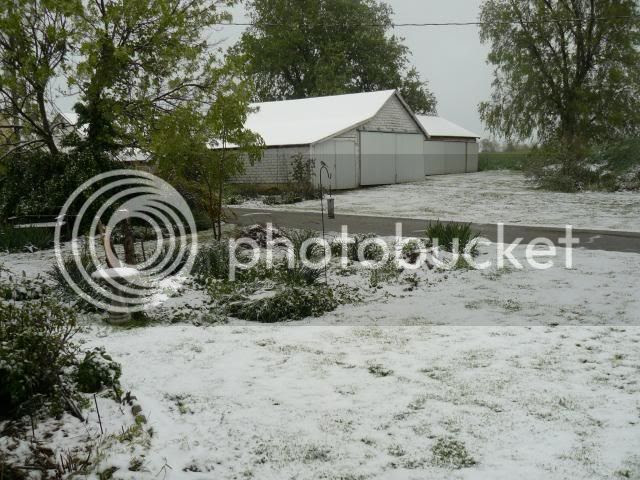 Maybe this isn't so disjointed it will make sense....if not, I will try to do better next  time.
Posted by gld at 7:52 AM