We have warmed up a little.  At least not freezing at night.  We are still having those cloudy, dreary days often with a drizzle attached.

Yesterday was supposed to be the delivery of "our" sofa........didn't happen; didn't receive a call either.  I will be checking today.  The La-z-boy man did come and repair the foot lift on DH's chair.
It now works like new.  He told us we were  wise to repair it.  It was built in 1991 back when they used real, soft leather and were built  better.  He said if we  bought a new one  we would have seen him within 6 months! What a sad state of affairs.

Seems I can't  quit making bread.  I have a full loaf of whole wheat oatmeal in the freezer but saw a picture of Easy Tuscan Bean Soup with a slice of bread on the side.....I had white beans cooked and had all the ingredients, well almost all, and knew I wanted to make it with some of my 'go to' recipe of French bread on the side.  I was off and running. 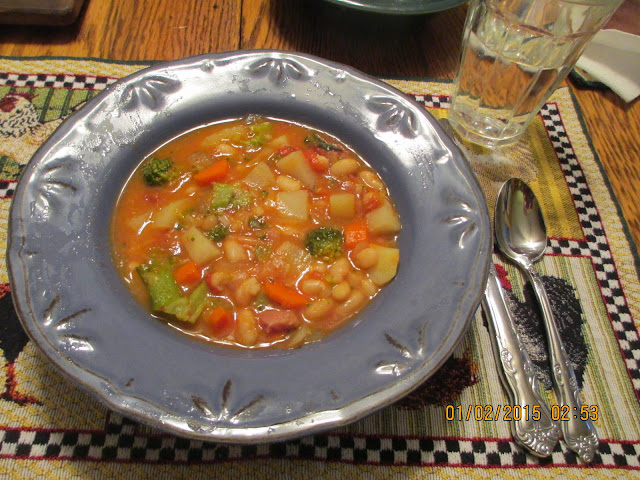 This was just a combo of onion, potato, carrots, broccoli (called for kale), tomatoes (my own canned), celery and the white beans.  The seasonings were salt, pepper, garlic and a touch of rosemary.

It also called for summer squash which I didn't have.  I may try to freeze some this summer just for soups. 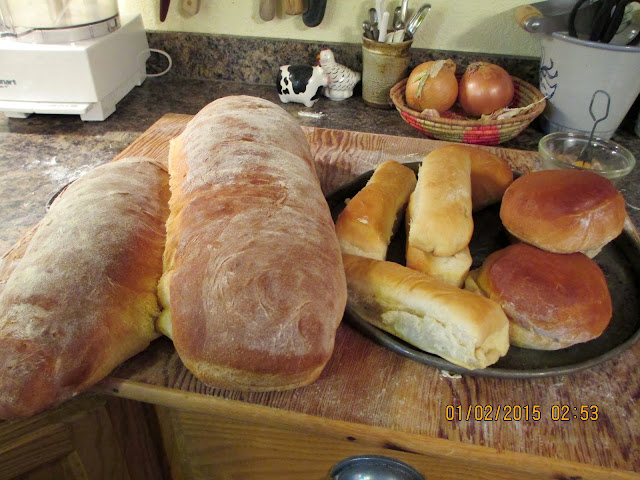 The recipe makes 3 large loaves but I make up part of it into buns.

French Bread (from newspaper so many years ago, I can't remember exactly)

submitted by:  Dorothy Swinney of Republic,Mo.
I wish I could tell Dorothy how much we have enjoyed this recipe and how many people I have shared it with.

Mix well in large mixer bowl.  Knead well (I use the mixer from start to finish).  Cover and let double in size.
Divide dough into three equal parts.
Rroll out to about 1/2 inch thick.  Roll up like a jelly roll, as  tight as possible, pinch side and ends tight.  Place loaves on greased cookie sheet and let rise again until double.  Note:  I use two sheets since the loaves will grow together if too close to each other.

I have never had a failure with this  bread .  I did omit the salt once.....no one noticed!