First, the weather has been very mild and pleasant.

I had to chuckle when I read Kris's blog  today.  She started 2015  with a tire problem and a washing machine problem.......

I will list our New Year issues in order:

1.  Ordered wrong blood pressure gadget; had to return it.

2.  My ancient Kenmore  sewing machine failed over Christmas while  I was trying to mend granddaughter's new  tee shirt.

3.  Ordered a cheap Brothers from Amazon; it arrived minus the bonus pack.

4.  Emailed Amazon over the weekend (obviously no one works since they did not answer  a phone request)told them all I needed was  the accessory pack.
received notice  they were replacing the order; not to return the present  order.

5.  Today received the second Brothers machine.....alas, no accessory pack.
I am returning both and will  not be reordering a Brothers!!

6.  The scariest was a letter from the IRS stating they had not received my 2013 tax return and didn't know where to credit my payment................thankfully the records were on the computer so I printed and mailed the return.  I have no idea what happened!.

My 3-year old KitchenAid Pro 600 series stand mixer quit mixing.  Motor runs but the slightest resistance causes the paddle to stop.   Have it in the shop now.  I have ordered a heavy duty portable mixer to use in the interim.  All I have is a $13 one that just hits on certain speeds after much jiggling.

I believe that is it!  I hope.

All else is well.  DH is  scheduled for a stress test this Thursday and a lung  function test next month.
He is feeling better and doing all outside chores.  We are keeping our fingers crossed on this one.

Since Sugar's pen has been taken over for the puppies, this is her favorite spot (note the heater) 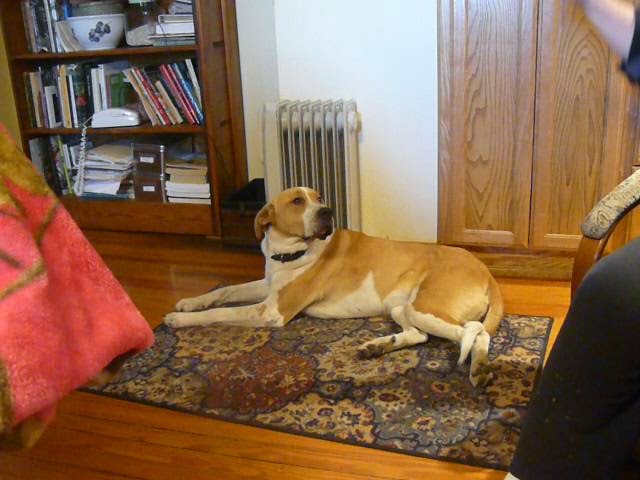 She still roams often.  This last time was about 3.5 miles away.  She was playing with a little girl on the porch.  The Beagle was at home.  I have given up........