I had tried one many years ago and it fell flat when I took it out of the oven and I have hesitated to ever try it again. But we had accumulated about 4 dozen eggs and I got brave yesterday morning. An internet friend had given me her Betty Crocker recipe that she had been using for many years so I pulled it out from the files and began.

Tip: I have always separated eggs by pouring them back and forth in the shells draining out the whites. That is what Mom always did. I just saw a chef on TV putting them into a bowl and gently scooping up the yolks in his hand. What an improvement over my old method! I did break one at a time in the bowl just in case a yolk broke. 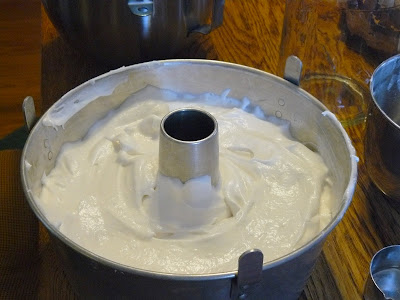 This how it filled the pan. 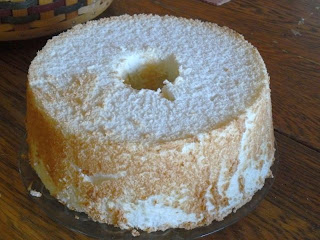 And this is the first slice 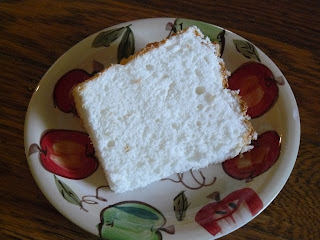 DH thought it was the best one he had ever tasted but he always says that! I did agree that it was delicious and very, very tender.

Here is her recipe:

Stir together flour and first amount of sugar, set aside.

Bake 30-35 minutes or until top springs back and looks dry between brown patches. Mine took 35 minutes. Invert pan over tall funnel shaped bottle (I used a soy sauce bottle)leave until completely cool. Cut around sides and hole with long knife. Invert over cake plate, remove pan. I then slice between bottom of pan and cake and the cake falls directly onto the plate.