I have missed a couple of days. Mostly just lazy but I want to keep it as my journal so I will backtrack a little.

I milked in the morning. Went well. Did some cleaning.

New Project: I had several years worth of pieces of both homemade soap and store soap slivers so I decided to remelt these and see what I could redeem. I would say it wasn't 100% successful. I should have asked my soap-making buddies about how to do this before I checked the internet and then sort of ad-libbed it.

First mistake: I should have chopped up the pieces more before I started the melting. I added some water and a little olive oil and they did begin melting quickly.

Second mistake: I should have placed the pan over hot water (like chocolate). It began to stick.

After what I decided was too long, I strained the pieces out and put them in the food processor. That made a sort of whipped stuff which is OK. Some soapers do this for a fluffy looking top. It does make for a very slimy cleanup job!

I added 1/2 cup cornmeal for a scrubby texture. I have sliced it, but is is still pretty soft. I don't know if it will cure out hard or not, but it is usable.


I am sure glad I didn't waste my fragrance oils on it!

Today has been brutally cold with lots of strong winds....I haven't been outside.

This seemed like a good stew day. I used my electric saucepan and just made a no-recipe version using stew meat, onion, celery, carrots and potatoes and 1 pint of my tomatoes with some added water to cook the meat first. The only seasoning was a little Worcestershire, a bay leaf and salt and pepper.

I completely forgot that I had half of one of our favorite casseroles left from when I used the already hot oven from cooking pizza. It is a great way to use leftover ham. You just layer sliced potatoes,onion, some cheese, cream of mushroomm soup (diluted with some milk for spreadability)and chopped up ham. I usually get at least two complete layers in the dish. Bake covered until potatoes are tender which takes forever, well over an hour. I should parboil the potatoes a little. I have been making this since we were first married.
I use pepper but no salt because of the soup.

I also made more granola. I can't believe DH is eating it so well. He sprinkles it over his oatmeal!!!! I couldn't find the blasted recipe. I know I got it from a blog where they called it the best granola that someone had brought to them. I hope I have it in my file. I found another recipe on Allrecipes that I kind of followed. I think it is very good, but it didn't make the little balls or pieces like the other one did. 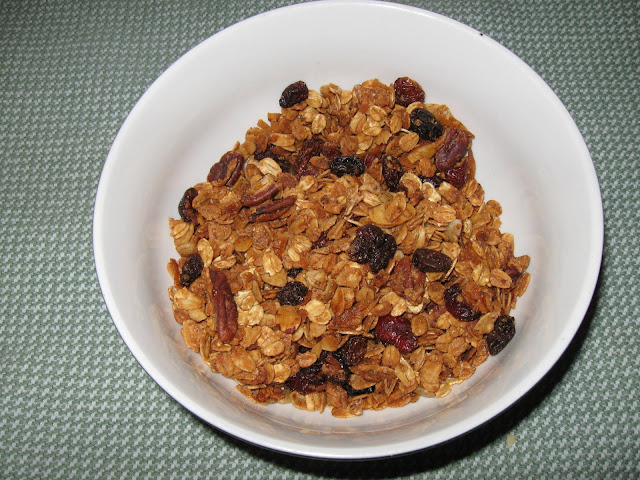