Out by 6 AM yesterday. Another warm night and very hot day predicted.

I seem to be moving very slowly in my effort to catch up. What did I do yesterday morning for 3 1/2 hours? I tilled up a new patch in the west end of the Kitchen Garden.

I hope this morning to plant there: Yellow Crook Neck Squash and melons and maybe 15 feet of Cherokee Trail of Tears Pole Beans.

I managed to load a black trash can of alfalfa meal into the dump bed of my trusty garden cart....you should have seen that operation. It was heavy; both utensils were slippery. I finally dumped the trailer bed down, rolled the cart to it and managed to tip it over and with my knees and arms shove it up the trailer until the thing tilted up again....Where there is a will there is a way (another favorite saying of Mom's)! DH wasn't here or I know an even better way to get it on the trailer.............

I dumped this load on the newly tilled ground stump bed and will till it in this morning. I will plant everything I have left here!

I watered the corn patch for about three hours while I was working. I want those Half Runner beans up. My garden is pretty dry all over.

I am heartsick about my favorite Buff Beauty Rose. I spotted three branches of Rose Rosette Diseased limbs. I cut them as near the ground and I could and will just hope for the best. I must take lots of cuttings for insurance. I disinfected the pruners after. They aren't really sure how it is passed. I do now how it starts...and we have more multiflora rose around than ever! I killed out one in my immediate yard this year by using glyphosphate but the surrounding fields have them.

I planted the vinca, and some agastache around the foundation beds. I am seeing more and more 4 O'clocks where the mother plant was last year. It took a while but I finally have them started. Mine are the multi-colored ones. I also spotted a few scattered cleomes. I love self-seeders.

I have promised myself to finish planting everything this morning.....

My lower back was beginning to tell me my time was up so that was it for the gardening part of my day.

This is another path. It is between the Kitchen Garden Fence (east) and the back side of the still not cleaned out Driveway Border. The plants on the fence are self-seeded malva sylvestris and the lily is (can't remember) but a lovely pink one that I have had for years. 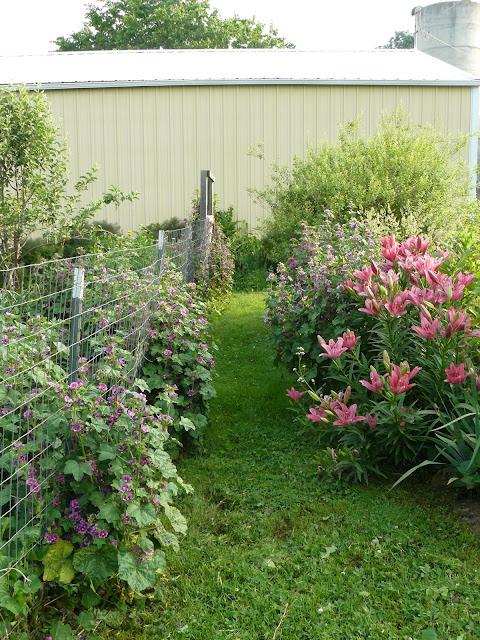 I caught this butterfly on the salvia a day or so ago. The salvia is another self seeder. 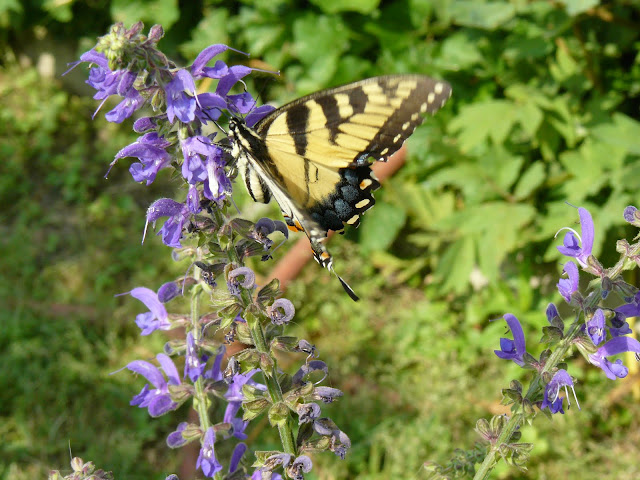 We were nearly out of bread and completely out of buns so I decided very late in the day to make bread. I know that is not the best time to have the oven on but my mornings are taken for now.

I just planned to make a whole wheat recipe which makes three loaves and make one up into hamburger buns............plans changed along the way. All because I am too cheap to throw out two packages of proofed yeast.

I had yeast proofing in 1/2 cup of warm water...phone rang. I answered it because my FIL was having some tests done and I didn't want to miss their call. It was my aunt who talked for about 20 minutes or so. When I got off the phone, it didn't look like the yeast had done much. I added one teaspoon of sugar to feed it and see. I was so sure it wasn't good, I mixed up another two packages (actually using bulk yeast so it was 4.5 teaspoons) and added l of sugar. I measured out my flours and began the process. By now both yeasts are nice and bubbly............so I made a double batch; the first whole wheat and the second, a three-loaf batch of white bread. My oven in the new stove is huge so all of one batch can fit in....I just had to schedule the rises so one would be in the oven cooking while the other was rising. For a change it all worked out. Here are the results:

These were both new recipes. I wanted three loaves of each so looked for recipes of that size.

The white bread is from my new favorite cookbook The Joy of Cooking and the other is from Blue Ribbon Breads. The white bread was the softest dough and made a wonderfully soft bread that will be good for sandwiches.
Posted by gld at 5:17 AM