Bean Soup and odds and ends - Onion and Garlic Harvest

We have had some pretty disagreeable weather for a few days, overcast and even got some more rain; about 1/2 inch. They are predicting heavy rains along and south of I-44.  We are about 10 miles north of I-44 so we may not be in the heavy zone, but we hope we are.  The ground is pretty wet now so that would mean run-off that would refill ponds for farmers.

I just read Ilene's blog about cooking beans and having leftovers and it reminded me of what I did with some leftover beans last week.  First I cooked a large pot of white beans with a very meaty ham bone and we enjoyed it with cole slaw and cornbread (I baked this so I would have some leftovers for dressing for Thanksgiving).  The next day I didn't want beans again  so I modified my Bean Soup recipe that called for stew meat.  I cut all the ham off the bone and added it back to the beans pot.  Then I diced up 4 potatoes, an onion and some celery, covered with water and cooked it until very soft.  I used the potato masher to slush it up some.  I then added about half the leftover ham and beans to the potato mixture.  I added salt and pepper to taste and brought back to a boil.  I used the masher again.  I could have used an immersible blender but mine is for soap making....At the last minute I added a large dollop of butter.  It was better than the original beans!  I still have a small portion of beans left which I will make into baked or barbecued beans today.

I think I will make another oatmeal type bread today and check it against the Grandma's bread recipe.  This will be a good bread day....it is cold and having the oven on will be very cozy.

I started a quart of buttermilk yesterday and it still hasn't clabbered.  I used store milk for a starter so I don't know what happened; will just leave it out longer.

Pictures of the Day

Candy onions and garlic.  I had lots of Super Star white onions but I have used all of them already; they don't keep quite as long as the yellows. 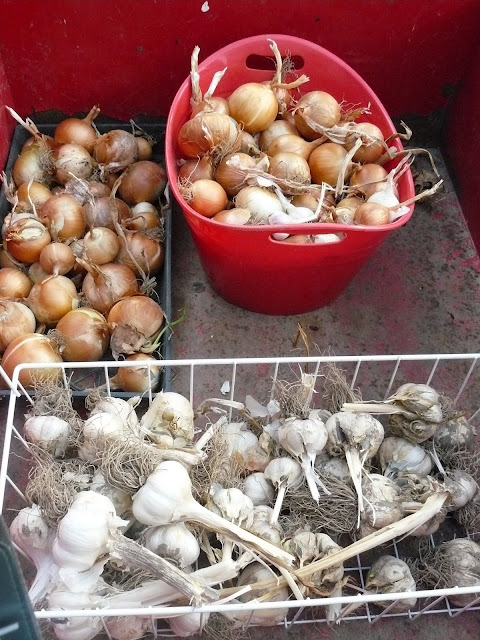