I started to post three different days but always got sidetracked and they are so out-of-date I will just begin new.

Weather has been way too hot. I have tried some gardening but give out around 10 or 11 AM. Heat really bothers me much more than it used to. I did get the kitchen garden re-tilled. Planted a row of tomatoes, my Prosperosa eggplants, the flat of calendula that is played out by now but I put it in the ground anyway. Cleaned out the cabbage rows, potatoes and onions and mulched.
I am still way behind but such is life!

I will probably loose most of tomorrow. Finally after two or three phone calls, the plumber is coming out to replace my hated white sink and put in a new faucet. We are also replacing the undercounter lighting which was very small weak fluorescent fixtures with xenon that he tells me will be twice as bright. We are also adding two new ones at the deep corners. My eyes (like my hips) aren't what they used to be....on cloudy days I think the kitchen counters are way too dark. We also worried about the wiring the carpenters did on the lighting....we keep burning out bulbs and get some flickering. I think they learned as they went! DH has always been worried about them and won't leave one on at night for a night light because of it.

This man says he can do carpenter work too. I am keeping him in mind for the back porch project. He is just a little too talky for my taste and I am always wary of that....I will know more after he finishes this current project. It is through our regular mechanical company so I know they will stand behind the work.

I hope the sink and faucet don't stand out glaringly in the kitchen.

Cow died
Calf is now in the barn and (don't faint, I almost did) DH is bottle feeding it twice a day! I am keeping a close eye on this little project since I don't think he has ever done it before.

Grass is waist high on the farm and DH has begun brushhogging, but he isn't supposed to be out in extreme heat so I think we will try to locate someone to do the whole farm and get it over with.

I have two shrub roses in bloom which I love. The pink one is very fragrant and came to me indirectly. A grandiflora rose was grafted on it. When she died this came forth and I like it so much better even though it only blooms once. 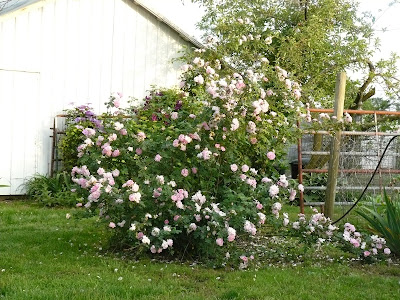 The next is a Canadian rose, William Baffin. No fragrance and just sporadic reblooms but a healthy vigorous rose. DH complains it is too close to the gate and so I let him cut it down every year or so. It rebounds with a fury!

and last is a climber, Awakening, an improved version of New Dawn (so they say) It has been planted a few years but is just now blooming nicely. I have it on the front porch which is not the best location. She is much too rampant and I have to cut off long branches that come across the steps. No one uses that porch which is good! I detect no fragrance and didn't on the New Dawn I had either.

This time of year when it rains too much and I have company (which I dearly love) and I start getting behind I get both panicky and depressed. I must develop a new attitude. What gets done is good and the rest can wait. I have to keep telling myself it isn't the end of the world. All will get done eventually.....or not.
Posted by gld at 8:01 PM