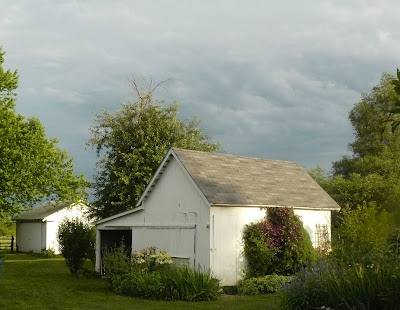 This is what it looked like when I went out this morning early, a little like rain. It was supposed to be our last moderate day so I decided to finish spraying the trees and start the mulching and weeding of everything I have neglected while trying to get the new garden tilled and planted.

I hoed out the hoophouse of Kwintus beans and watered them (via an irrigation ditch I dug while hoeing. Next, I mulched the volunteer tomato plants that sprung up at the end of the sweet corn patch. I think there were around 9 of them. I used wet newspapers and a bale of straw. They look pretty good and required zero effort until now on my part.

About this time (after I sprayed you understand) it began showering in earnest. I tried to out wait it but only got pretty wet and had to give it up.
DH had been on the tractor to do some more clipping in some smaller areas that the custom man didn't get. We met at the garage and decided to come in and make a pot of coffee and take a break. I had some pumpkin muffins with streusel topping in the freezer so we treated ourselves to one. The rain has stopped but it is still very dark out so don't know what it is going to do. We certainly need the rain.

The lilies are in bloom. I would have to look up old orders to see what they are. I think I got them on sale years ago from Bluestone.

I don't remember mixing the colors!
They are in front of my garden shed that is attached to the west side of the smokehouse. No charming sheds here! Just farm buildings. 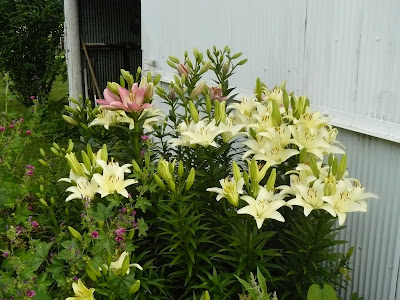 I love this soft pink one,

I have noticed that lots of the perennials got way taller than normal this year; due probably to heavy rains in May. The red flower in front of the seedling peach tree is Jacob Cline; it is probably 5 foot tall this year. 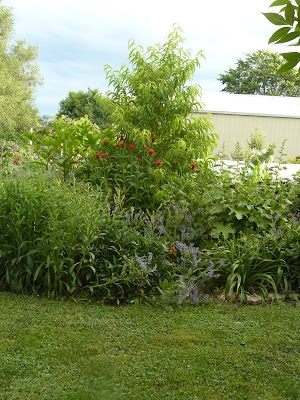 I solved it myself sort of...when my sis in Iowa took a look, she kept saying it made her think of a mallow. Then when it bloomed out wide like a poppy. I thought poppy mallow! A few years ago a friend gave me some seeds, callirhoe involucrata, poppy mallow, winecups and probably some other common names. It is a native in Missouri and does well with little extra water. Well, my seeds never germinated! I don't know if I dumped the pot here........or if a bird carried a seed or what. Another curiosity is they bloom the second year...........so it had to be here last year. It must not put out much growth the first year and it looks so much like another weed that is common I just didn't pay it any attention. 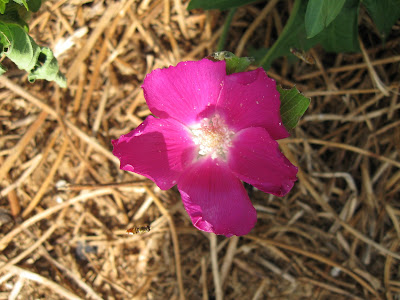 It needs to be moved but I will wait until fall or next spring. It has a very long tap root and I don't want to loose it.
Posted by gld at 9:31 AM