We had a really nice, 50° day yesterday but too much wind.

I was dreading milking but am happy to report it went well. I got smart....at last.
First DH stayed with me. Second we carried the milk container and strainer to the milking area. When I got a half bucket, I poured it in. That way I would only loose half if she went berserk again.

The chain worked fine. She got antsy toward the end but nothing really bad. I was nervous the whole time which isn't good but that will pass with time.

This was errand day and we decided DH would do his exercise first. If we wait until after his enthusiasm lags....

Just as I was getting into the truck he mentioned that a piece of white paper was blowing around the drive.....I didn't pay any attention. We got to W-M and I opened my bag to get my list and it was not there. Guess what that white paper was.
I tried to recreate a list, but I knew I had some unusual things on it. I got most of those but when we got home, there lay the list in a flower bed. DH said don't look at it and you won't miss what you didn't get! I had to look and yes, I did miss some items. Nothing critical, I hope.

I did remember the Size J crochet hook and the 4.7 GB discs to back up Windows 7 on the new computer. It wouldn't let me use the regular 700 MB's that I have. I hope to get that done today. So far, I am liking Windows 7 very much. My internet speed is still slower than I would like. I have wireless, but I checked again and DSL is not available out here. Wireless is faster than my old dial-up so I will just be grateful to have that.

My Iowa sis just got a new Kindle and she just knows I need one! The library is just 7 minutes away and I can pre-order books on their website and just go in and pick them up at a drive in window.....I don't need to spend 5-10 dollars buying books. I told her about the Kindles last year and she has a friend who bought one. She has serious eye problems and I thought being able to enlarge the print would be great for her. She got it yesterday and called me three times. She was very excited and is going to love it. She buys her books now because her little library is very limited and she doesn't like to have to finish a book "on time".

We have such great phone conversations.....when she gets some new toy she calls and tells me I should get it too. I deserve it, her quote. She got a new KA mixer....I need one. I do want a heavy duty mixer....but a Bosch and Mom's old KA is still working. She got a new computer, I deserved one. She got a laptop. I needed one. I love her to pieces. We were just discussing how different we were in many ways, but the same in others. I am a list maker, I like to do financial reports, know what things are costing me; she could care less. We remember our past entirely different. I remember certain things; she remembers others. She cooks by instinct; I need a recipe to start with. Some days we talk 3 or 4 times; then we may go a week without talking. Thank you Lord for cell phones.

Just a normal day, we did deliver some Christmas goodies.
Stopped by the local library and grocery. I can't seem to stay out of the store for more than two days......I will do much better after the holidays!

We visited with our elderly neighbor who lived here for 50 years. We were delighted to find her alert and doing pretty well. We bought the farm from them.
She had gained 10 pounds which was worrying her, but we think she looks much better.
I took her some Christmas goodies. I hope she enjoys them.

Another trip to the store! This has to stop.

We got a light rain and it remained around freezing so no bad road conditions.
I cleaned today getting ready for Christmas dinner. We are having DH's parents out.
Our son and his family will be skiing in Colorado and our daughter won't be down until New Years.

We had a nice quiet Christmas day with the in-laws. I sent them home with enough food for at least two meals. She doesn't really like to cook. I wished they lived closer and I could share with them more often.
She gave me a rooster teapot. I love it but will use it as a decorative piece rather than a teapot. 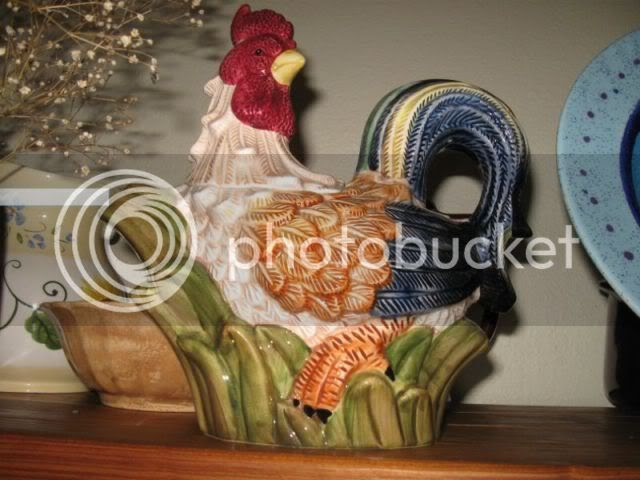 Just a nice, lazy day. DH put lights in with the chickens hoping it will encourage them out of molt and into laying! We don't have too much hope for success.

We had a big, country breakfast of ham (from Christmas dinner), eggs, gravy and biscuits..........I love big breakfasts.

I milked this morning. She is still antsy and I still have DH stay with me and I empty the pail mid-way through so I won't loose anything.

We spent the rest of the day shopping for gas ranges. My lemon Jenn Air oven has been stopping midway during baking if I so much as touch anything on the despised electronic control panel. This was replaced last summer; I bet it was a rebuilt panel. I need to ask the Sears crew if they do this. I wonder if I will get a straight answer. I have had so much trouble with this range, that each year I buy the insurance from Sears and it has been money well spent!

We shopped three stores............nothing to really impress me except my feelings about Best Buy were reinforced. I do not like that store. They had exactly 2 ranges on the floor and the only clerk spent the entire time on the computer. I then looked for a counter-top oven that their website said they carried...........nada! I will not be getting in a hurry with this....in the meantime, I will call the Sears service crew and schedule yet another service call.
I think my insurance runs until summer. They will, of course, have to order the part, and then come back to fix it.

Today, we are checking two more stores.....I may end up ordering one online and I may not get one at all! I get so tired of spending our hard-earned money on expensive, new things and then have all kinds of problems with them. I told DH yesterday if I bought all the major things I wanted to replace, the cost would be $5,000......that's a lot of beef calves!

First: the stove
Second: either new carpet for the living room and master bedroom or hardwood floors.
Either way the carpet needs to go! I am leaning toward carpet now...it varies from week to week.
Third: New living room furniture.....sofa and two chairs or loveseat. I have had mine since the 70's and they show it.

That doesn't count the new Bosch Mixer (can wait on that one) and the Nutrimill and the dehydrator....there is close to another $1,000!

So here is what I will do. Think about what is absolutely positively necessary.
One thing comes up:

I need a working oven.
I will be fine if I do none of the above....I can always keep up the annual insurance policy with Sears and keep on keeping on.

Kris, I will be going to our Habitat Restore today. I am excited about that.

At last I am caught up. I always jot down each day in my written journal, but promised myself I would keep it online.

I see lot of people are redoing their blogs for the New Year. I need to restructure mine just so I can (and others if they want) find things. How should I go about that?

Advice will be much appreciated.

I will leave you with a favorite picture of the last cats to come to the farm via their pregnant mother who was dropped here.
They still snuggle with each other.....don't allow Mom near and love the dog. I see them rubbing up next to him daily. They hover around him but he comes bounding to me when I try to get a picture....I will try to capture the loving group through a window.