I lost another post! I think I will just start doing a draft on Open Office Writer. It absolutely said saved at 7:26 AM this morning.

We got very cold last night but it wasn't quite as bad as predicted. We were -9° at day break.

Well I did get most of the shoveling done yesterday. I first dug a path of 6 feet out to the bladed drive from the patio. Then slogged through drifts to get to the generator which wasn't too bad. The wind had blown it away from the housing so I just swept the vents clean.

Next was down the bladed drive over to the chicken house. I had to dig a 10 foot path to the gate and then the real work began. I dug through 24 inch drifts to the hen house, one small scoop at a time. There was no pushing that much snow. I did get rewarded by another 5 eggs. I watered the chickens and put down fresh straw in the nest boxes and scattered some over the outside pen area. 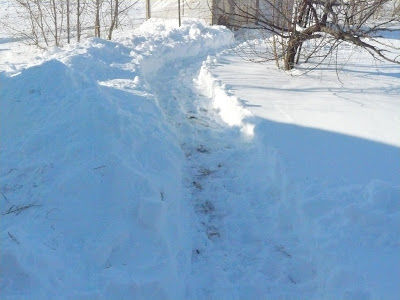 At least I got a dozen eggs this week:

I was amazed by the amount of snow leading into the calf pen where I milk. The length of the concrete walk (about 10 feet) was over three feet deep! I knew I would never last to complete that job last night. I did manage about 1/3 of it before giving up. I wanted to shut the pen gate so the other calves wouldn't wander in and make more of a mess inside the barn...I finally just dropped down to my knees to crawl to the pen and pulled myself up to get into the pen proper....locked the gate and then crawled back out! I can imagine what I looked like. I had snow from my waist down.

My living room is the strangest shaped thing and there is no good way to arrange it but I keep trying!
Everything is off center....I decided to move things around (again) all by my lonesome. DH gets annoyed every time I do it so I catch him outside and just do it myself. I still don't like it, but it is a change. The plus is I vacuum everything that hasn't been touched in a while. I got him a new swing-arm floor lamp for reading.............so now I am lamp poor. My daughter will just tell me again that if I add something, to get rid of something. For me that means hauling it out to the shop/garage.

I got a Joy of Cooking cookbook for Christmas and am slowly trying out recipes in it. I haven't had a bad one yet.

For a few years I have been making bagels by another recipe but it calls for almost twice as much flour and I don't want to run out before the roads are safe so I did the one from Joy of Cooking. It is a smaller recipe and seemed a simpler method....at least I didn't have the usual mess.

Here they are after rising the second time (very short times): 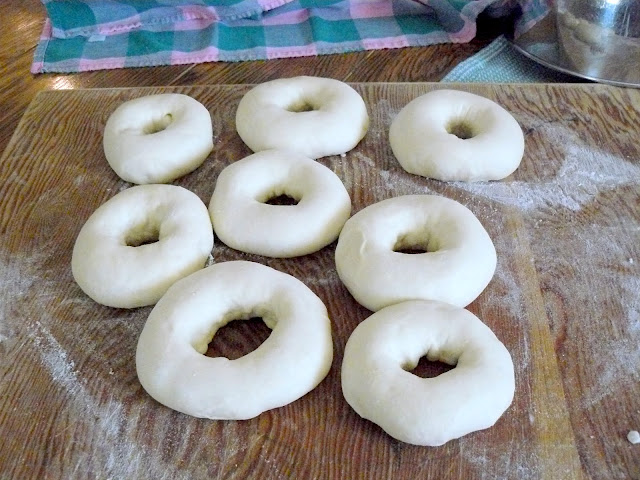 and after the boiling a baking process: 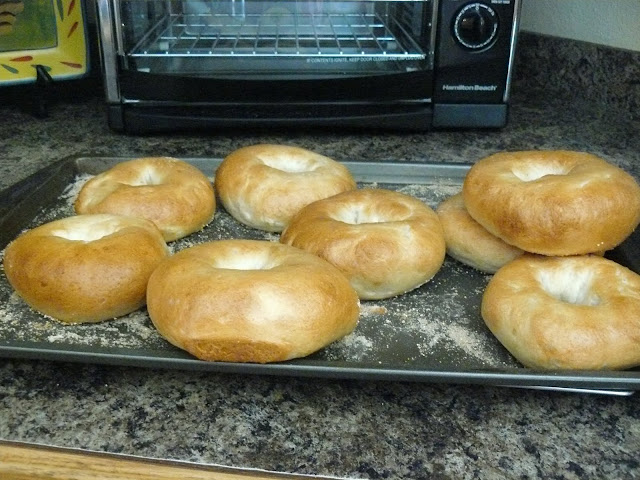 We had to test one and I am happy to report it was crispy on the outside and soft and chewy inside. I don't think they are quite as tough and chewy as the other recipe which I like too.

I made these much larger so a half one with cream cheese will be wonderful for breakfast.

Just finished some shoveling and reloaded all the bird feeders. We are supposed to be down to zero again tonight.