We have had a rainy couple of days with 2 inches falling. It is pretty cool too so not much has been going on outside besides the minimal chores for the farm.

I finished up the cottage cheese this morning with only one small disaster which didn't affect the finished product. I had left the milk overnight in the fridge so I could skim off the cream so decided I would bring it back to room temperature before adding my l cup of buttermilk to quicken the clabber process........way too much later, the milk was almost at the boil point and some had stuck to the bottom of the pan. I let it cool way down, added the buttermilk and let sit overnight.

I ended up with 1 lb. 12.6 oz. of cottage cheese from l gallon of milk with lots of whey left. I will be trying biscuits at noon with just whey instead of either milk or buttermilk. I will let you know how that turns out....


I plan to show the good, the bad, and the ugly of my life on the farm. I have shown the very bad (calf loss to predator), and now the ugly. I consider everything in between the good.

I have been working on the Garage Wall Border where the weeds, in particular some kind of alien grass (Brome?), has invaded. The first two thirds went pretty quickly and looks like this: 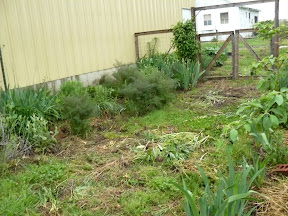 and this is the end of the bed with a tree sapling and other weeds.
I won't do much until the Spiced Custard iris bloom, the dead looking stuff is Russian Sage that hasn't been pruned...yet. 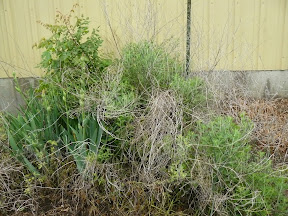 but here is the really bad stuff, the area where this grass is, It spreads with runners like Bermuda but doesn't pull up so easily. I will try it after these rains and see. If not, I am resorting to herbicide. 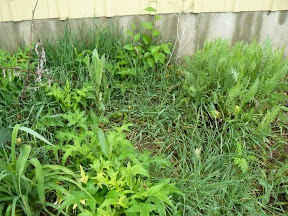 There is really nothing here that is critical to save unless maybe the daylily. I hate the globe thistle and will be happy to see it go. The yarrow I have in other places and can easily be replaced.

The wind is picking up and it is very overcast....possibly more rain in our future.
Posted by gld at 9:35 AM