We are having a much nicer day today. It was above freezing when I got up.

This was milking morning. It was a disaster.
Willow is a stubborn cow and not exactly real laid back. She doesn't kick, but sometimes she pulls back and she did this morning breaking her tie, knocking me off the stool and spilling 3 gallons of milk. To say I was mad is an understatement.
I need to build her a stall where she is locked in from the rear or put a neck lock stanchion in front of her feed box. I will have milk again in the morning. This time I will have my assistant stay in the barn with me. She likes him...........not me. The previous owner's son did most of the milking. You would think by now, she would be used to me. Who knows............Just one of the little fringe benefits of having a milk cow. I have never had one behave like her. It isn't like she is mean and trying to hurt me; more like she is done! and she wants out of the barn. I am not looking forward to our bout in the morning.

My assistant tells me he has found a chain to attach her to the feed bin.

I hesitated to include this bit, but it is the truth of living on the farm. It isn't always fresh air and warm animals and lots of garden space....it has its little downers too so I left it in.

After settling down after that little barn episode, I decided to make Mom's recipe for peanut brittle. I made a double batch of the syrup mixture but didn't double the peanuts. It turned out well. I think her recipe uses a little more soda which makes it very brittle and not hard at all. Probably no one will eat it except the in-laws and us. 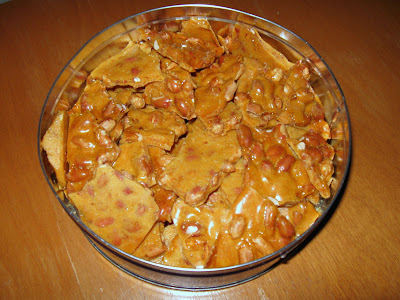 Yesterday we saw the Pileated Woodpecker again. We haven't seen him for several years. I missed getting a shot (camera) of him. Thank you very much gray cat!
I decided to take out the screen by my computer. That is where I can observe the bird feeder and take my pictures through the window...........which will have to be cleaned often. It is a magnificent bird and always makes us smile. He is Woody Woodpecker!


I am still reading on the third in the series (and last) of Steig Larrson's novels,
I will be glad when I am finished...........not my favorite reads at all, but I will finish.

I was all set to crochet the hat shown on Granny J and Mom2fur's websites but found I need to buy a size J crochet hook. It is on my list now and I will pick it up today.

I also baked one of the turkeys I had bought over Thanksgiving. The test is complete. The Butterball turkey is worth the extra money. This one was Jennie something or other, Dillon/Kroger's brand. It wasn't nearly as tender and juicy as the Butterball. I made us a simple evening meal of turkey, mashed potatoes with gravy, and peas. The rest will be put in the freezer for either Christmas or a later date. I couldn't face staying up boiling the carcass so froze it too.

Finished up the day watching "Endgame" on Masterpiece on PBS. A good move about the ending of apartheid.
Posted by gld at 5:45 AM