We had a fun afternoon yesterday beginning at 1:45 PM. Our grandson plays for the St. Louis Diamond Devils baseball team (up to 12 yrs.) This week they are playing at the Cooperstown Dream Park in Cooperstown, NY. Some of the games are broadcast livestreaming and we were able(somewhat) to the watch the game and see our own No. 1 playing ball. Of course with my Total Wireless connection, we got so much buffering with the livestream that it had lots of starts and stops and we missed some action. My sis saw it perfectly with her service in Ia. I live within 20 miles of a major southwest Missouri city and some of us can't get high speed internet service....

I believe our president promised us that , did he not? He is playing another live broadcast game tonight and we will be sitting right here!

It was a hot morning. 79°when I went outside at 7 AM. I sprayed a few things. I think malathion gives almost instant kill but no long range lasting effect like Sevin.
I haven't been happy with the hose-end Sevin then it occurred to me this morning that the tube may be clogged. Liquid Sevin is a very thick product and settles easily. I intend to dismantle it today clean everything and try it again. When dry, it should leave a milky residue on the plants.

The two traps were overrun again with beetles. I emptied them and rehung them. The beetles were swarming around the traps by the time I had them hooked up. Yesterday afternoon we saw them in a cloud swarming outside the dining room window.

I made myself get out the tiller and till the area where we dug potatoes and onions. I am happy to report it is now clean once again. I will plant a few turnips there later. It was 95° when I came in at 9AM!

More trouble in the garden! The raccoons have found the sweet corn! Three stalks were down and they knocked over a pepper plant and broke the leaves off a winter squash vine that was just up good.
I plan to leave the gate open tonight and hope the dog will run them off............but I am not counting on it. I still want my Mountain Cur dog!

I picked enough cucumbers for a couple more quarts of dills and harvested 4 small heads of cabbage. I have never successfully made sauerkraut...........I may try once again. I am going to follow Ilene's method which she wrote about on her Blog, The Rock Whisperer. I think these were secondary heads to the Early Jersey Wakefields. I have three huge Flat Dutch left in the garden.

Besides the JB's I am seeing a new color of stink bug and my first cucumber beetle in the garden. I am going to hit everything with Sevin if I don't change my mind.

We are getting very hungry for dessert.......I have to decide what to fix. I am laying out pie crust as soon as I get up from the desk.

I made a cherry pie and a mincemeat. I will freeze most of the mincemeat.....it is not a favorite of my helpmeet. 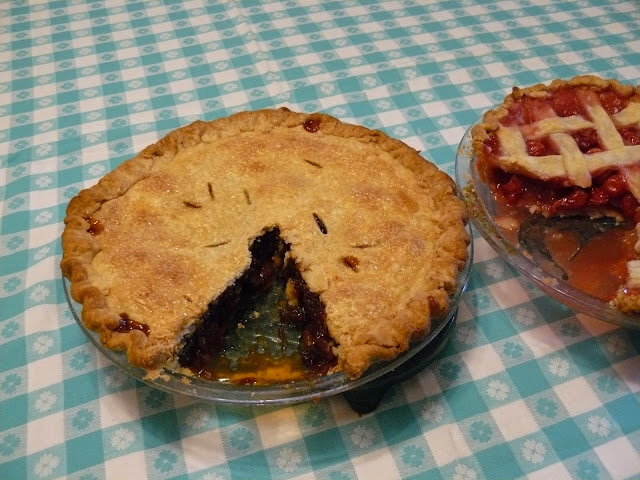 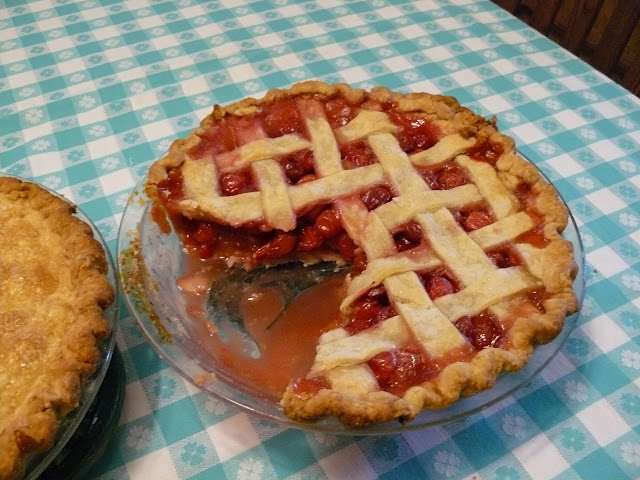 We watched another ballgame tonight. Our GS got a home run but they lost the game.
Posted by gld at 5:41 AM