The morning started out cool and misty and it then turned into a light rain that dropped 1/4 inch more here. Very nice.

The sun is out now but it is still very cool.

Yesterday I checked out the garden center at Lowes looking for a small tree to plant in the stump bed....no luck there but they did have the most indcredibly blue caryopteris and was simply covered with flying things. I couldn't resist. It is called First Choice and is a much deeper more vibrant blue than the one I used to have.

Can you see the bees and something that looks like a lightening bug but isn't? 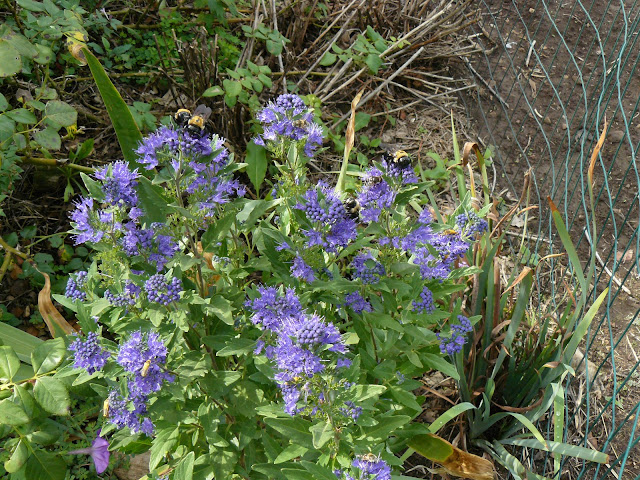 I am putting it just to the front and left of the pink rose Aloha by the back door.

We got the three doors shortened so they won't hit the new carpet and now I have to stain and varnish. What I really want to do is to replace them! They are hollow-core doors and really not very attractive.

More Good News! You know our last handyman and helper turned out to be not so dependable....well, we were shopping in our local Ace Hardware which is a small store and lumberyard in a very small town. DH told them what we really needed was someone to hang some new doors. The owner spoke up and said, see that tall man standing behind you? He's the man for the job. Turns out he is a carpenter, jack-of-all-trades. I asked for a card and saw it stated finish carpenter, architectural specialties....I told him my humble work might not be anything he would be interested in, but he said no, he did everything. He is booked up to January. He did say if he couldn't do something he would know someone who could.
The owner's son told us privately that this man had done all the finish work on his home. I am hopeful once again. We would really like to get the Milk Parlor painted before winter. It is really an eyesore right now.

Then I want the porch or porches enclosed; DH wants a different door on the back porch, I need shelving on the back porch for canned goods and odd utensils.
I want a 4-ft wide walk from the door straight out to the drive that would lead people right to the door we use as the front door instead of the back porch. Oh I forgot, I want a new entrance door....and the list does one.

But I can wait on the house things, the milk parlor has first priority for me now.

I bought another small thing...at a used furniture store next to the hardware...
more later about that.
Posted by gld at 3:51 PM