It is much warmer here this morning, 54° compared to 43° yesterday.  The high is supposed to be around 70°.


Yesterday turned out to be a very long day.

First I researched and found that the vanilla beans store the longest in an air-tight container in a cool, dark place.
I realized that the came in a vacuum sealed bag so I did the same thing.  I used the Food Saver and froze 12 beans to a pack.  I bought so many because of the price break and the fact that I had points on my Amazon credit card that paid for the entire order.  I didn't even know I was accumulating points....what fun! 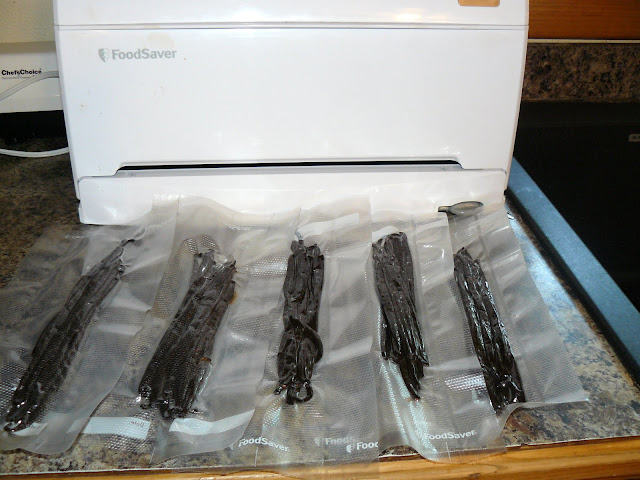 The question now is what on earth was I thinking........way too many beans.

After cooking the cores and peelings until they were soft, I drained all the juice from them using my hands to gently press in the colander.  I ended up with 7 cups of juice, exactly what the jelly recipe calls for.
I did use some old pectin just because I had it, but I don't think I would have needed it.  It sure speeds up the process though.

I pressed the remaining mass through my food mill and got 48 oz. of nice sauce or pulp.  I used an equal amount of sugar and added some cinnamon and cloves and began cooking it down in the much used maslin pan.  I probably reduced it by half.

I decided to make the jelly  even though it was getting pretty late in the day.

Here is what I ended up with from the 'waste' of the peels apples: 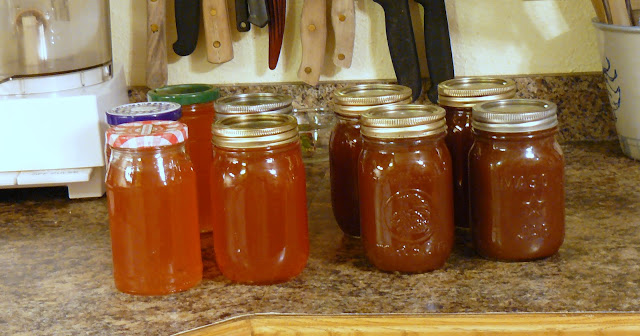 Right in the middle of the jelly-making, our new neighbor stopped by to see if a stray cat that had wandered to their place and stayed was one of ours.We invited her in and she followed me into the kitchen.  I wish you could have seen the mess!  If you have ever canned or make jelly, you know what I mean.

She sat down and stayed for two hours....she's a talker and so am I and sometimes DH, so we enjoyed it.
I didn't even care about me mess but it was distracting trying to finish the jelly! I ened up with not sealing a few jars and will store it in the extra fridge.

It was 8 PM when she left.  Her husband actually drove up looking for her!  She is maybe a little younger than our daughter and has the charm of the South.  I didn't notice an accent though.  Maybe not far enough south.
They are from Raleigh, NC. but she grew up in Maryland.

I did a cursory cleanup and quit for the day.
Posted by gld at 6:53 AM