I went out around 8:30 to finish the berry patch and it took approximately two hours but I got it done.  I was assisted (after mentioning it a more than a few times) by the helpmate to fork all the prunings over into a deep ditch at the back of the patch.  He still has another pile to go but it is out of the way of the mower and so may just decompose insitu!

I may have set things back by pruning this late but so be it.  Another season and they would have been out of control.  I still want to get in there with the string trimmer and knock back some weeds/ground cover of mostly chick weed.  I may share a picture once that is done; and I may not.  It isn't something I am proud of.

The patch has spread wayyyyy out of the original row.  I also see I have lost about half of the blackberries over winter and that the raspberries that I thought I would never get going have moved into the blackberries and may take over.  I still want to do new rows in the new orchard.........probably just a dream.

A side benefit of the cleanup was I exposed 21 steel posts that DH pulled for fencing.  This used to be a tomato patch.  We figure we made $105 on the posts.

Lunch  was a simple redneck fare of barbecued hot dogs (fried in catsup and mustard with a lot of sliced onion), chips and I did toss  together an apple tart. 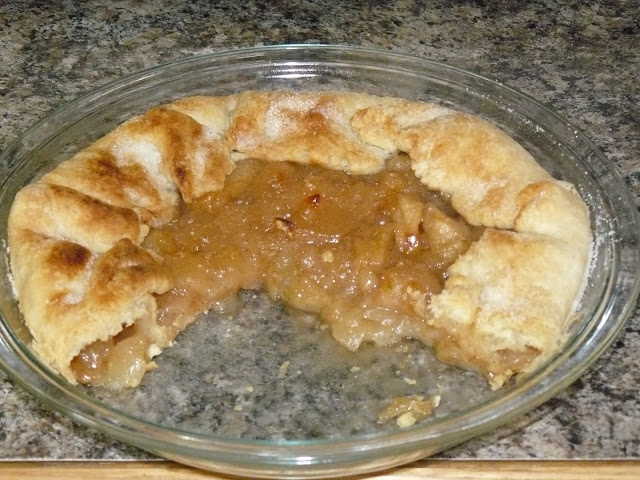 This was made with frozen apples and crust.  I cooked the apples first and made a sort of pie filling thing.  I wanted it to cook fast and it did.

I love my Japanese snowball bush but so do the aphids and each year it is ruined  by them.  I sprayed it with dormant oil spray when I did the orchard and now I am watching it closely to see if it helps.
It is in the green stage now, 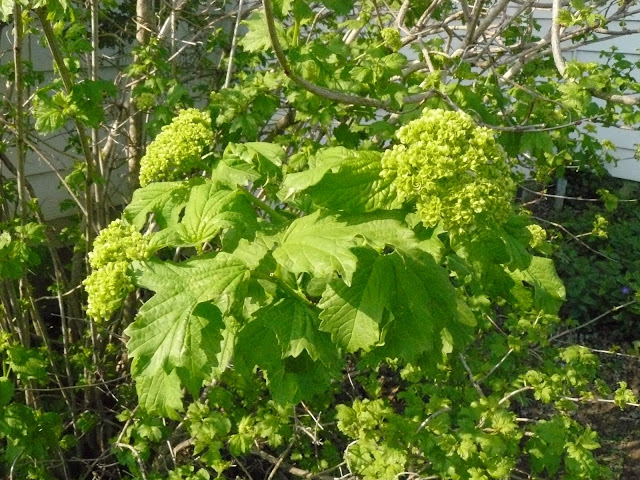 In bloom now are the apple trees, the pie cherry tree, the lilacs, the snowball bush (green stage),  and  I see the clematis are budded.
Posted by gld at 7:44 AM