I slept in this morning.....5 AM.  It didn't even freeze during the night.

DH had already taken Sugar out and she was sleeping peacefully by the heater on the rug at his feet.  Most importantly, he had the coffee ready.  He left my chair and headed to his chair in the living room.  I read while the puppy continued to sleep.  I got in some very good reading time.

DH had his oatmeal with blueberries, bananas and English walnuts.....(he fixes); I had one egg and l toast (I fix) and breakfast was over.  Tomorrow I will do  us a country breakfast and try out the new sausage.

We had porksteak, mashed potatoes with peas and a carrot/cabbage cole slaw for lunch yesterday.  I also made a very quick (from my frozen crust) apple cobbler.  We were very happy with the flavor of the pork.  I wish I could describe the rich flavor which is very different from the pork you buy, but it is delicious.  The price had gone up considerately since last purchase but we were expecting that.  Our half fit into those heavy fruit boxes that you get at the orchard.  I wish I could have weighed the meat but it was too much trouble.  It wasn't  cheap but neither is it at the store.

Late in the afternoon, I decided to render the ground fat.  It was a package a little over 4 lbs.  I will do our son's too; he never wants it.  I may offer him some rendered lard and see what he says.  I use my all purpose maslin pan and it works beautifully.  Once it is melted a bit I put it on my simmer burner and just stir now and again.  A little water in the pan first keeps it from sticking.

Here is the end product. 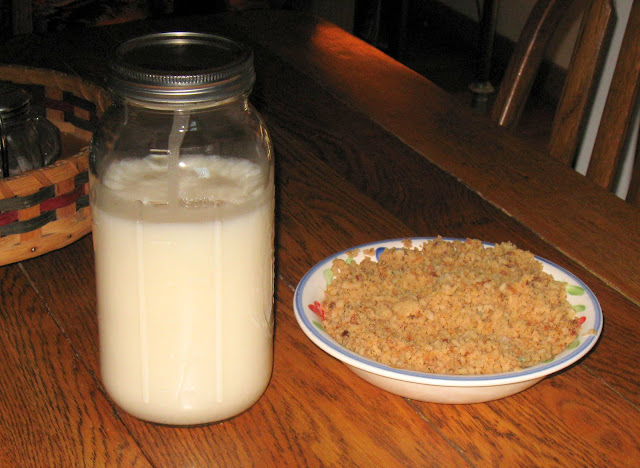 That is a half gallon jar.  I never know how to use the cracklings.  I put some in cornbread once and wasn't impressed.  They might have been a little overcooked.  I tried not to do that this time.  They taste good with a little salt.  Any ideas how to use them?
Posted by gld at 8:57 AM