I can't believe it is the middle of May and I still don't have all my garden in. It has been too cold. The 5 tomato plants I did plant don't look good! They need some heat. I put black plastic around them this morning to help heat the ground. I left one without the black mulch for a test to see if it makes a difference.

I took yesterday off from outside work except for milking. I did milk Willow, but will just have 12 more days and then I turn her dry.

We were completely out of bread so I baked. I made three loaves of Oat Bran/Whole Wheat. I also made a small mincemeat tart (for me) and a cherry for DH. He is not a fan of mincemeat.

I did my morning tour to see what was happening in the garden and took a few pictures.

This is another path: Between the garden fence and the smoke house.

One side is the fence (Garden Fence Border) and the other side is part of the New Bed, the smoke house (hosta bed behind) and the old apple tree. It runs all the way to the old chicken house.

This is a border that was never dug. I layered wet newspapers and then flakes of my old hay....once in a while I would lift a flake and dump the kitchen waste of coffee grounds, greens and egg shells, but that is it. I let it lay over one winter before planting then I just moved a flake and dug through the wet paper to plant. I had to replace the hay this year in places but it lasted through several seasons.
I have clematis, roses, iris and perennial salvia and some white hesperis that tried to take over this year all along this fence. It is actually prettiest from the garden side. There also is the shrubby perennial persicaaria polymorpha which is just beginning to bloom.

The two heirloom roses, Reine des Violettes, a hybrid perpetual and Baronne Prevost, also a hp. require an acid soil so I have added iron, soil sulphur and sprayed with Miracid. The BP has responded better and has dark green leaves. The RdV needs more care and attention. Both are in full bloom and smell wonderful.
There is a bluish hint in the pink of the RdV but the camera doesn't pick that up well.

The blooms of both are very double and very fragrant.

The blooms are very similar but RdV is more purple which doesn't show in the photographs very well.

Next to the roses is a clematis named Pink Chiffon... I later found it is the same as my Hagley Hybrid, just a different name: 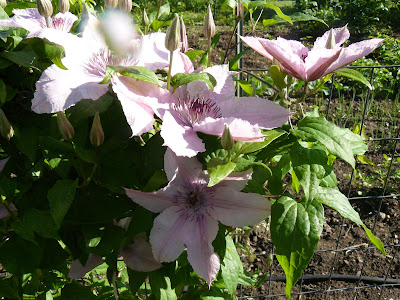 I am waiting for the sun to dry the grass before mowing and trimming.
We had a minor adjustment made to the Stihl trimmer this morning and it should start much easier. I have already started it once to test it and did a tiny bit of trimming.

In the meantime, I am making a pot of chili for lunch.

Surprise, surprise! after lunch DH said he would mow the orchard (can't damage anything back there). I will start testing the trimmer.
Posted by gld at 2:06 PM