Yesterday was another nice day.

I finished the Garage Wall Border. DH hooked up three drop cords in the garage and drug them out to me for the electric chain saw. Where the Russian Sage (perovskia atriplicifolia) was growing was a snarl of Bermuda Grass, maple and elm saplings and, of course, the old sage plant that hadn't been pruned properly so I just cut it almost to the ground. I said I wouldn't use them anymore, but I succumbed to the need to get rid of the tangle of BG and sprayed with Gly-4.

This is the area I am working on. 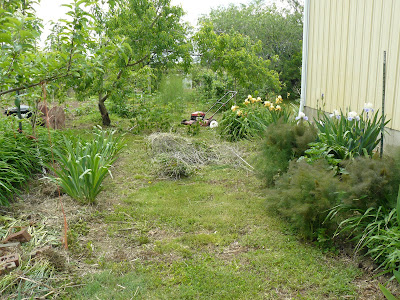 and this is the rat's nest that I cut down and sprayed. 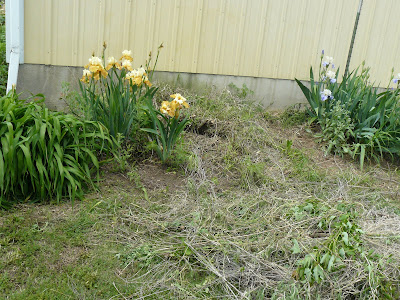 I did some trim mowing but haven't used the string trimmer yet. This border has some bare spots that I plan to fill with rampant self-seeder, like hesperis and larkspur....no more iris. You cannot pull Bermuda Grass (BG) from the roots of iris! Maybe some dill tossed in. I have culinary sage and Bronze fennel and another herb that I am not sure about already there. I would make a good herb bed because it is a berm and stays very dry and is on the south side.

The weatherman predicted some rain so I decided to mow the rest of the yard and got almost all finished before it did start raining. It rained a long time, but was just a shower with maybe less than a 1/4 inch in the new gauge. Why or why do they make things so complicated to read! Water get down below in the holder...which has a separate gauge...I think my coffee can was just as good.

I like paths! There is the path where I was working; then the path between the east end of the Kitchen Garden and the back side of the Driveway Border, 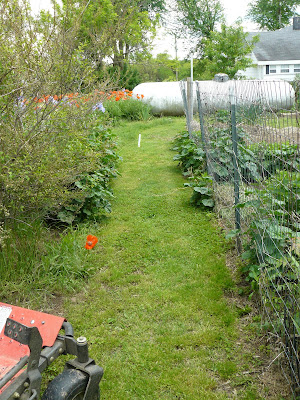 Notice the self-seeded malva sylvestris along the path; it is another rampant self seeder. So far, no rust but I am sure it will appear. I just cut it down when that happens. If I am lucky I get some pretty flowers first. I had two varieties but they have crossed so the colors are variable. 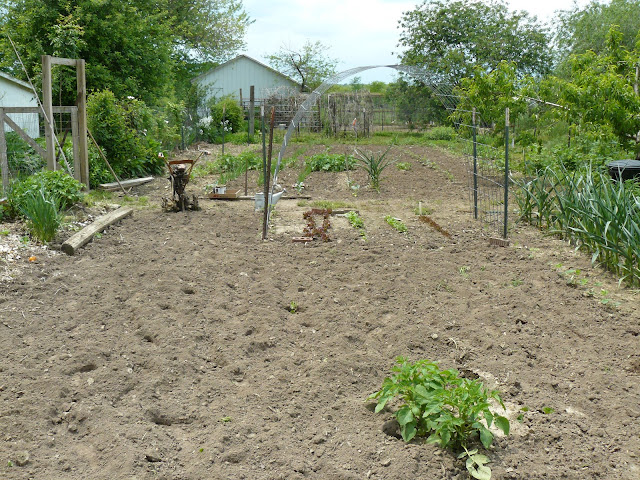 This is the garden side of the path. I had just tilled it. You will see various clumps of potatoes...they volunteer each year and I just till around them; they will give me tiny new potatoes much faster than the new ones planted in a row.
The left side of the photo is the fence where I grew hyacinth bean vine last year and at the base of the fence is the compost heap. See there are potatoes growing out of the top of it too and some garlic from my original garlic planting of three years ago. I can't bear to chop out good plants.

To the right are some leftover strawberry plants that didn't fit in my two new rows and the row of garlic I planted last fall....then on farther out of range is the "temporary" holding bed for daylilies and iris and the two apple trees (the left of the garden path where I was working). The temporary bed has become a permanent bed!
There are Hyperion, some seedlings I raised and another cream and burgundy eyed daylily and, of course, various iris.

Hyperion is a great old landscaping daylily and it naturalizes really well. It has a lovely fragrance if you bend close. There were very few weeds in it.

Where the mower and tiller are resting is another path separating the garden. It divides the Kitchen Garden into an East and West side. I still didn't get the lettuces divided, but I did get them hoed. I was very disappointed in the germination of the snap peas on the hoop frame. I vow to never buy seeds at a big box store again (W-M).

And last: This is the oldest rose on the farm, Parson's Pink China Rose. I cut it to the ground last year and it came back very nicely. If it had scent, it would be perfect, but it does not. I planted it when we first moved to the farm in 1992. 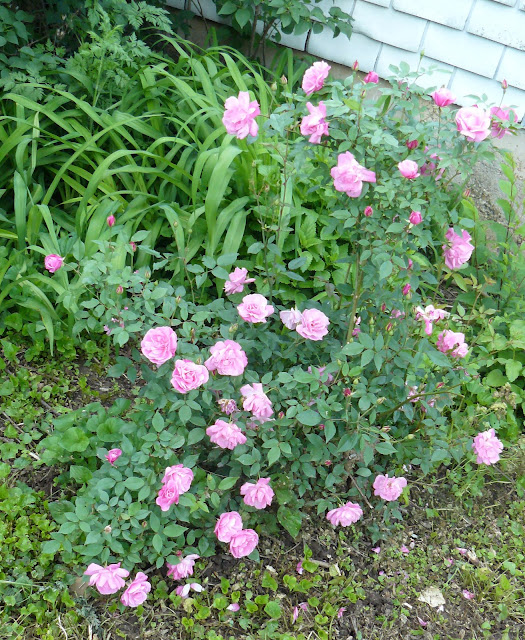