When you have machinery, you can be guaranteed that there will be issues and on a regular basis.

Another issue: The carpenter's helper who was touted as being a good farm hand for us for occasional work...has been less than ideal. He came on time one day; the next he was late and finally called with car trouble. He promised he would be here yesterday morning.......no show; no call either. He has really hurt himself with us. I told DH who paid him at the end of the first day....he now had gas money so wasn't quite as eager to labor. He is not a teenager. I don't allow much slack for unemployed adults who behave like this. He set his wage and we paid it. Be interesting to see how it plays out. He also lost a pair of our pliers in the fence line somewhere. I told DH we should have been suspicious of his quality of work when he left a roll of fencing and another tool when he did the 'clean-up' on the chicken run!

One soap box comment: This is one of the many things wrong with young people today; they don't know how to put in a day of work. They are not good to follow through, as in calling us. OK, not all young people, I know that, but we have had several experiences with hiring them on the farm....not very successful.

Back to the machinery: The old farm truck that was loaded with the fencing tools that the boys took back to work on the fence decided to not start.....way back on the farm. DH charged the battery; it started the next morning once and then wouldn't again. He unloaded the tools on the trailer and hooked it to one of the tractors. Monday we will have the truck towed to the mechanic....an expensive fix I am sure.

I saw my first Tiger Swallowtail yesterday on the white hesperis. I took a picture of one on almost the same day last year, so it wasn't early. 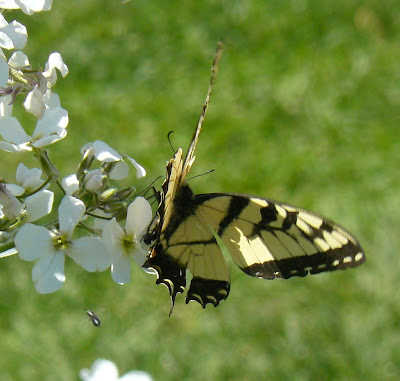 My single variegated heliopsis Loraine Sunshine is still with me. I need to save some seeds this year. They won't all be variegated though. A safer bet would be a division or a cutting. 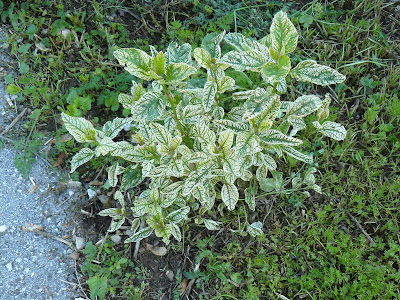 I started the day planning to mow around the kitchen garden area....then I saw the awful lot of cheatgrass and wild carrots about 2 feet tall in the Garage Wall Border and started pulling that. I have about half done and feel very good about it. I need to plant that border more thickly with self-seeders....the best weeding tool is allowing no bare ground in the beds and borders! I have lots of seeds I plant to just sprinkle around when I get finished.

Then I moved to the Cellar Bed and did the back half of that one.
The front half requires very little because it is wall to wall with plants. 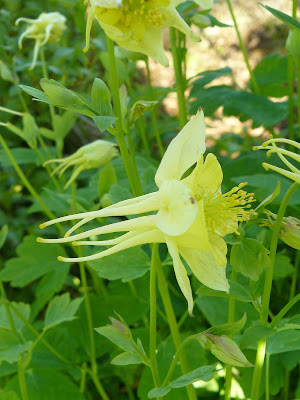 I spread one more bale of mulch hay around some trees and shrubs in the front yard. I see I have already nicked my lovely Amur Maple with the string trimmer. I hope the mulch will take care of that problem.

The Amur Maple is a lovely small tree with tiny fragrant blooms this time of year, the bees love it and so do I. It also has good fall color.

Another one I am enjoying is my bird-planted sassafras by the bird bath. It is a yellow green this time of year....I never noticed that last year. 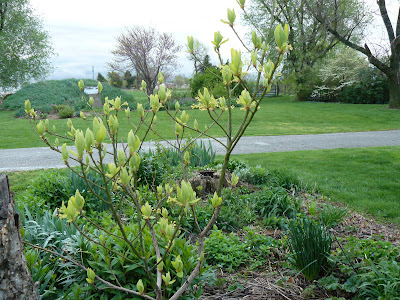